When I first heard about Morphite, it sounded like No Man's Sky, but with a story.  It's a space exploration adventure game.  You guide Myrah and travel from planet to planet to find out the secrets of the legendary Morphite.  Plus, there are tons of extra planets that are randomly generated when you land on them.

When you first see the game, it can be a jarring experience.  I immediately thought it looked like a child colored an N64 game.  I'm not meaning that in a negative way, that was just the impression I got.  The worlds are very colorful, and not big on detail.  What they are big on is visible polygons.

The story isn't really ground breaking, but it's enough of an excuse to hop from planet to planet and battle bosses.  The story worlds are not randomly generated, and have some light puzzle solving.  My main complaint with the story is that it's trying too hard to be funny.  However, they do succeed with your robotic companion Kitcat, who I find very humorous.  Maybe I just have a weakness for sarcastic robots.

Exploration involves a lot of moving around, jumping, scanning creatures, and later on, some grappling.  There are a lot of things to scan, from plant life to creatures and even some minerals.  There are even variations of each one: strong, weak, and even rare.  Trouble is, there was little to no visual difference between them.  So, you end up running around, trying to scan anything and everything to see if it's a new one.  Little and quick creatures are also annoying to scan.  It's not the quickest scanning, and the lock-on is really bad for it.  Scanning kind of a pain, but you do need the money and rare scans.

Story locations are marked on the star maps, but on the actual planets very little is.  Objective markers would have been nice for the times in the second half of the story where I was lost and confused.  The maps in general just aren't good.  Sure, they show the outline of the land, but no detail.  Oh, and they are limited to your current elevation, meaning they change a lot when going up or down.  Ugh. 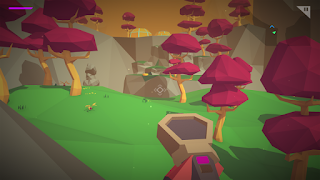 Besides scanning and jumping, you will also be shooting.  After all, not everything in the universe is friendly.  Fighting on foot is very basic.  You aim with one stick, move with the other, and shoot with the trigger.  The Left Trigger locks on.  It works slightly better than it does for scanning, so it's best not to rely on it.  Ammo can be pretty scarce.  Thankfully, the basic pistol will slowly refill to 5 shots if it runs out.  It's not a huge help when your max is 100 shots, but at least you won't be left defenseless.  Switching between the different weapons and the scanner isn't very quick, either.  While I didn't die that often (at least from health loss), you can die pretty quickly if you aren't careful.  The boss fights aren't very hard, either.

Moving in space is little more than picking a destination from a star map.  You can only go so far as you have fuel.  Fuel will regenerate over time, so it's best to hang out in a space station and do some trading, or explore a planet and do some scanning.  There are some random events while traveling too, like finding items, losing money, finding traders, and getting jumped by enemies.  Like land battles, space battles are very basic.  You are in a stationary turret, and try to aim at the enemies.  Every shot produces heat, so you don't want to shoot so much that you overheat your gun and have to wait.  There's also a dodge that you can use every few seconds to try and avoid damage.  The space battles function, but they aren't terribly exciting.

What else can you do?  Well, you can sell your scans.  Rare scans and harvested minerals can be used for various upgrades to your suit and ship.  The necessary rare scans come from similar sources.  Need heat resistance?  Get a rare scan from something in a hot environment.  It makes sense, but can be a hassle trying to track down the last few you need.  Ship improvements are just pure money, and weapon upgrades require money and mineral resources.  Minerals are gained from shooting the appropriate rocks randomly on planets.  Sometimes you find a good amount, and sometimes there is only one.  The improvements get pretty substantial though, so it's worth doing them.  I'd recommend fuel first, so you can go to farther systems much faster.

As with most games, there are problems abound in Morphite.  There are holes in the environment and strange invisible walls.  I'm betting most of these are because of the random worlds.  I've fallen through the map several times, and some even on story stages.  I've gotten stuck in the environment and on various places on planets.  Some of these can be solved by quitting to the menu.  It thankfully saves very often, but the worlds are generated when you land on them, so even if going back to the same one, it will have a different map.  One story planet kept locking up while I was trying to load it up.  My last big gripe is that I can't adjust the viewing area.  This cuts off text on all sides of my screen and just bothers me constantly.

So is Morphite just No Man's Sky with a story?  Not as much as I would have thought in the beginning.  It has a distinct visual style, and an unremarkable plot saved by a back-talkin' bot.  The randomly generated worlds can be nice, but feel too much like each other to stand out.  The shooting aspects are very basic.  Scanning everything can be fun as you try to find the rare scans you need for the next upgrade, but you will end up doing it a lot.  It's not a hard game, but does have annoying parts that keep it from being a relaxing experience.  Overall, it's worth trying, but likely won't end up being memorable.


The Good:
Many worlds to explore, upgrades to purchase, and story to uncover.

The Bad:
Lacks polish or depth in many areas.

The SaHD:
How awkward was that scene where you learn about the grapple gun?  It just sounded like a video game.  It wasn't natural at all.

(Review code for Morphite was provided by the publisher)
Posted by The SAHD Gamer at 1:51:00 PM