Bad Apple Wars is a visual novel...or maybe a cooking game?  Okay, probably not the latter.  It's a otome visual novel set in a mysterious school.  There is a brewing conflict between the people that obey the rules, and those that break them (these would be delinquents, or "bad apples").  As the new girl in class, you will quickly choose which side you are on.

And I do mean quickly.  The first major route change is at the end of the prologue, with the next big one soon after.  This second choice is fairly innocuous, as it just changes the next scene, but the following choice pretty much locks you into a character's route.  Well, it's not technically their route, since the flow chart doesn't list it as such, but you will be pretty much stuck talking to that character for the rest of the game.  I'm on the fence about if I like that or not.  On one hand, having such a major choice appear so small is not good.  On the other, it does make the narrative more consistent.  In turn, that strengthens the already interesting story.


Another jarring thing is that there are no dialog options, even though there are points that feels like one would pop up.  Your choices are which side you are on, then which guy you talk to to start their route.  This sounds worse than it actually is, though.  I didn't really notice I hadn't made a dialog choice for awhile, as I was still engaged with the story.  The plot moves along pretty quickly, especially once you get to what the game considers a character's route.  There are a good and bad ending plus a special epilogue.  For awhile, it was very unclear to me what you could do to affect this.  It's all laid out in a nice flow chart, so at least you can clearly see what you have done, if not what you need to do.

One unique feature in the game is the touch system.  Several CGs of characters during the story have places that you must tap.  Most times it just gives more dialog.  However, there are two near the end that are much more important.  Normally, touching the wrong place just doesn't do anything.  In these special scenes, you can only touch the wrong place so many times.  If you don't do it correctly, the scene still moves ahead, but is slightly different.  I eventually realized that this was what affected the ending in the absence of dialog choices.  I'm still not sure what effects the epilogue. 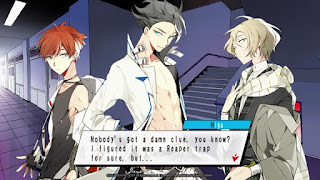 I don't see a game clock, like most visual novels, so I have to guesstimate my time.  It seems to be near the standard 6-8 hours for the first playthrough.  It's worth going through multiple times, because just about every other scene involves whichever guy's route you will end up in.  Plus, you don't really learn much about the others during a given route, and their backstories are pretty interesting so far.  Even if you skip the parts you have already seen, the other half of the game is still new.

Bad Apple Wars has a very unique setting, many differences to each route, and a very interesting story.  Admittedly, the story seems much more natural if you become a bad apple, but not in a way that messes up the narrative if you don't.  Getting the different ending routes is pretty unclear, but it's still a fun and worthwhile visual novel.


The Good:
Good use of color, interesting story.

The Bad:
Important route choice is early and innocuous, unclear how to get the different endings.

The SaHD:
I'm surprised some voiced characters didn't have a graphic.  It's not a huge deal, but it surely is a curiosity.

(Review code for Bad Apple Wars was provided by the publisher)
Posted by The SAHD Gamer at 3:23:00 PM