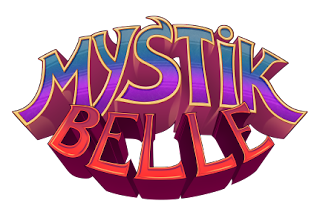 Mystik Belle is an action-adventure platformer made by Last Dimension and published by Wayforward.  After seeing the humorous trailer, I knew I wanted to review it.  It doesn't hurt that the graphics look like sweet 16-bit candy.

On its surface, the game is basically a Metroidvania.  However, it's also littered with point and click adventure game-like puzzles, and it works really well.  You'll find items that you have to use a certain place, usually to get another item to use elsewhere.  If you have played something like Grim Fandango, Maniac Mansion, or Disc World, then you get the basic idea.  Sure, mashing fetch quest puzzles with exploration does increase the likelihood that I'll get stuck (which I did several times), but both aspects of the game didn't clash with each other the way disparate elements sometimes do.

The only limitation of this that I don't like is the limited inventory space.  Belle can only carry so much.  Thankfully there are several warp chests around the map, that you can put items into and retrieve at another (at least on the normal difficulty setting).  Anything you leave will stay where you left it, which is a nice touch.  Even so, you will probably make a few trips to these chests to grab things you need.  Also, there is an apple you get at the beginning of the game (the hall pass).  If you don't have it, an invincible reaper will creep around and kill you instantly if he catches you.  So, you will probably want to carry that with you at all times.  If you never leave a screen without it, you'll also get a trophy.  What a good student!

The combat portion of the game is pretty solid and enjoyable.  It's also not very hard.  Belle can jump and shoot.  After each boss fight, you get a new spell, which will eventually get you a charge shot and a dash, both of which have combat applications as well as exploration.  The charge shot especially is great on boss fights.  Even so, boss fights aren't really that hard.  In fact, few parts of the game are actually hard.  When you come in contact with something, it damages you, but you also damage it.  This happens frequently because Belle's sprite is fairly big.  You take very little damage, unless you come into prolonged contact with it.  Since there is no invincibility time on a hit, it will basically drain your health while you stand in or on it.  There are no save rooms or items to heal your health, so you have to rely on drops from enemies.  There's just enough of them that it isn't really an issue. 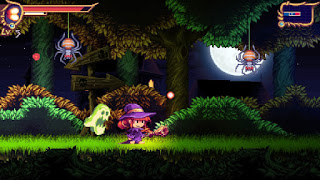 The only really "hard" fight is the final boss of the true ending route.  Even then, it's only because it doesn't follow the normal gameplay.  I'm not going to ruin what's going on, but you must do something completely different to everything you've done up to that point, and they don't even provide instructions as to what the controls are.  That, and you will die in like 4 seconds, leaving you almost no time to figure out what you are supposed to do.  I was very frustrated at that part, but I wasn't going to give up while standing on the finish line.  I made it through, but it left a bad taste in my mouth.

The platforming aspect didn't quite feel as good as combat.  There are a few jumps that are at the limit of Belle's jump, either distance or height.  The game feels pretty loose when she's near a ledge, which would sometimes cause me to fall when I was making sure I was far enough that I could actually jump the gap.  Sometimes the dash or double jump just didn't want to work.  Most times a missed jump is just having to get back up, so it's not the end of the world when it happens.  It's just an annoyance.

While the game is fun, it's also short.  It took me just under 3 hours to get the "good" ending, and that was done in one sitting.  I was only missing four items to get the true ending.  Finishing that up took only another 30 minutes, although I did use a list for those last items, since they aren't marked on the map.  It turns up I had seen two of them, but forgot they were there when I could actually get them.  Doh.  The only real replayability is for the achievements and trophies, of which there is a speed run one.

Mystik Belle is a fun action adventure platforming game with some point and click adventure puzzle solving thrown in for good measure.  It's a quick game, and not really difficult.  The art and animation is wonderful.  It's worth playing if you are a fan of Metroidvanias.


The Good:
The gameplay, the art, and enemy design are pretty top notch.

The Bad:
Felt a bit short for the cost, and the true ending boss fight is not fun.

The SaHD:
It took me way too long to get the "Belle?  BELLE!" trophy joke, but once I did, it made me laugh.

(Review code for Mystik Belle was provided by the publisher)
Posted by The SAHD Gamer at 10:09:00 AM