Senran Kagura comes out with another spin-off game, this time a third person shooter called Peach Beach Splash.  No, they aren't using real guns, or even ink guns, but water guns.  So the girls run around in skimpy bathing suits, soaking each other.  Yeah, I'm not sure why this didn't come out sooner, either.  Let's splash!

I was initially worried when the multiplayer option was so prominent on the menu.  After picking single player, I was immediately thrust into a multi-part tutorial.  After completing that, I was then greeted with the single player options.  A character's load out is a small deck of cards which will comprise your weapon, pets, and abilities.  The weapon aims and shoots like you would expect in a third person shooter, but there is a lock-on.  Each weapon takes a different amount of water to fire, and you can refill by holding the square button.  There does seem to be a delay in getting it to start, though.  After trying all of the weapons, and felt the normal assault rifle was the best fit.  It had range, rapid fire, and a decent ammo capacity.

The pets and abilities will be ready to use after a few seconds.  They are randomly distributed in one of three slots you have, activated by the d-pad.  Once you use one, another will take its place and have to charge.  Some of these are very good, so don't ignore them.  The shield ones are invaluable against named characters and bosses, and also a great way to have the time to revive a teammate.

Lastly, there is actually a bonus for using your water on your own characters.  This won't hurt them, but will get them wet.  If they get wet enough...wow that sounds inappropriate...they will enter a powered up state called Soaking Wet.  Original, I know.  This temporarily gives you unlimited ammo.  It's great.  It's also just as hard to get the AI to do it to you.  With unlimited ammo, you become a force to be reckoned with.  Some guns, like the mini-gun, become monsters with how good they are when they don't need to reload.  I have to assume that good multiplayer strategies revolve around using this mechanic with certain loadouts.

The "normal" selection of girls is present, with some of them being unlockable as you go through the story or other modes.  There's even a few there that I don't recognize.  I have to assume they are from a game or games that haven't been released in the US yet.  Hopefully that changes soon.  Because each girl just uses cards for weapons and abilities, there is no real difference between them.  On one hand it kind of sucks because your favorite character might not be as fun to play, since they all play the same.  However, it means you can basically only use the character(s) you like.  Plus, Hibari is no longer bottom tier!  What an upgrade! 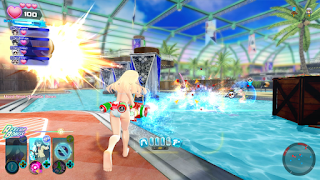 "But wait," you might be thinking, "is this really Senran Kagura?  Where is the system to destroy clothing?"  Fret not, as they have added Squirmy Finishes.  Once you drain all of an opponents health, they stay prone for a few seconds, which gives you time to run over and activate this feature.  You pull out a duck squirt gun, and shoot the poor girl with water.  You can buy different colors of water because...I don't know.  Anyway, you can shoot the face, chest, or...bottom.  If you do it enough within the time frame, the girl's top or bottom will fall off, revealing that trademark shine.  Shooting them in the face doesn't seem to do much.  Maybe it's a tame option?  If there's a way to knock off more than one article of clothing, I haven't found it.  Plus, you can't do it to the final girl defeated, since the match just ends.

Water fights are fine once you get used to them.  My first problem was telling everyone apart.  I know the characters, but they all start in the same white bikinis.  When there is water flying everywhere, girls jumping and dashing around, all looking largely the same...it can get confusing.  The first team on team fight was kind of a mess.  Afterward, I set all the girls in colors of bathing suits by school, so it was easier to tell them apart.  I also eventually figured out that different outfits are on different tabs in the dressing room, so you can put the girls in their normal or shinobi clothes.  And yes, those will rip.

As you can probably guess, each school has their own story line and progress.  With all four completed, a fifth story opens up.  Each has 10-15 stages total, and each match goes by pretty quickly.  They also culminate with a boss fight, which can actually be difficult.  In addition, there are "Paradise Episodes" to complete, which are smaller side stories, focused on different groups of the girls.  The final single player section is the "V-Road Challenge", which are basically tournaments.  Complete one, and you can challenge the next.  Unlike the story stages, these tournaments offer good money for completion.

Completing levels with give you some money and a card pack.  The money you get feels really low, at least on the easiest difficulty, and you need a lot of cards to level things up.  I assume it's a slow gain because you are supposed to get some for playing online.  I didn't try the online versus, mostly because I have no interest in it.  I tried once to do the online survival, where you fight waves of enemies and protect certain objects, but wasn't able to find another player.  I did a few waves by myself, but it would certainly be more fun with others.  That actually gave good money too.

All in all, Senran Kagura Peach Beach Splash is a fun spin off game.  The shooting is fast and solid, and there is enough single player content to satisfy me.  It won't replace the core game, since none of the girls play different from each other unless you change their cards, but fans of the series should try it out.


The Good:
Bouncy ninja girls getting each other soaking wet.

The Bad:
The only differences in characters is what cards/weapon you give them.

The SaHD:
This feels like it should have come out in June, not September.

(Review code for Senran Kagura Peach Beach Splash was provided by the publisher)
Posted by The SAHD Gamer at 1:17:00 PM