What happens when you mix WayForward's wonderful sprite animation, their metroidvania pedigree, and a blockbuster movie license?  Well, you end up with The Mummy Demastered, a 16-bit looking side scrolling action adventure...that needs better mixing.

Off the bat, the game looks really cool.  The sprites and animation are top-notch, and what I expect from WayForward.  The music ranges from average and forgettable to downright annoying.  You control your agent to run and gun through several areas of the map that don't always feel like they should match up.  I mean, if you are that close to the headquarters, why would you take a helicopter to the starting area?

Anyway, the map isn't the point of the game.  The action is.  Too bad it's just not that good.  Hit boxes seem off, the damage is too high, and there are too many enemies on most screens.  Crows move in medusa head patterns, and are somehow not the most annoying enemy.  Screens have lots of little crawling and jumping monsters that can be hard to aim at.  Many enemies have cheap placement just off screen so you hit them when you are trying to advance.  Most things take too many shots from your default gun, which drags down the fun.  To top it off, you can't even damage things that are too close to you, but of course they hit you, even if it doesn't seem like they even touched you.

You will get new weapons to use, but they all have limited ammo.  So, you may be like me and save them for bosses.  Even so, you will quickly run out of ammo in those fights.  Outside of boss battles, there are plenty of ammo drops, but still not enough to replenish what you use just to go anywhere.  If you are full of an ammo type, it will still be dropped.  Why not replace that with health?  Health pick-ups don't drop near frequently enough, considering how much damage enemies can do.  Plus, there are no rooms that restore your health to full, meaning you have to grind to restore it.  Not a good design decision.

Boss fights aren't much better.  The first was fine, but the second was just a horrible experience.  Lots of damage, lots of time, and it didn't always stick to its patterns.  In fact, they all take way too much time if you just use the default gun.  Because of the death mechanic (see rant below), you won't get any spent ammo back if you die.  So, you have to either hope you win, take forever, or grind for drops.  Not a great choice. 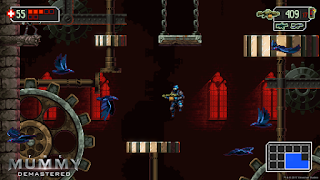 How about the platforming?  Well, it's not that great either.  It feels a bit stiff.  I'm not sure if there is a slight delay in jumping, or maybe the floor properties of the ledge aren't great, but there were plenty of times I tried to jump off a platform only to fall down.  I was playing with an Xbox 360 controller, and it didn't feel like it was a peripheral issue, just an issue in the game.  There's also plenty of low and inconsiderate ceilings that can get in the way of jumps.  I will admit the ceiling grab you get is really cool, even if the environment designs quickly limit how much you can use it.  It's like Mark of Kri all over again.

Now we can move on to the unique mechanic in the game that I alluded to earlier: the death mechanic.  If/when you die, your agent revives as a zombie.  At first I thought it was a cute animation, but nope, it's an actual enemy you fight.  Oh, and did I mention that it has your stuff?  Well, it does.  So, now you have to kill it.  With the default weapon.  And the default health.

You read that right, you have no upgrades whatsoever, because this is a new agent.  So you have to fight an enemy that has the weapons you did, but with the default stuff.  Ugh.  Oh, and you will only get back the ammo you lost.  Did you have 5 shots left in that machine gun?  That's what you recover.  Never mind that the zombie agent shot at you with that same gun 50 times, or threw 10 grenades, since you clearly didn't have that.  Somehow, he did.

It's a nice idea.  It fits with the game theme.  It's also not fun at all, and in fact sucks out any fun you were having.  You just end up in a worse position than when you died.  Thankfully if you die on a boss, the undead agent won't be with the boss, but the room before.  Since it automatically saves when you die, you have to get creative to avoid it.  Once I reached a new save point, I would quit out and copy that file to an empty slot.  If I died, I would copy it back and continue on, so I could avoid the annoyance.  That's not an effective way to play a game, but made it less stressful.

Like other metroidvanias, there are secret rooms and items to collect.  The teleport rooms are nice, as it's just a chopper that you ride to other drop zones.  The elevators to other areas are rappelling stations.  Another nice fit.  I'm also a fan of opening up some blocked rooms with grenades and their upgrades.  All three of these things are very appropriate to the setting, and are pulled off well.  Past that, we also get collectibles.  Not upgrades, actual little trinkets you pick up that don't really do anything.  I guess they ran out of useful stuff for players to find.  While I'm not opposed to collectibles in games, these don't feel like there was any care put into them.  The medallions are seemingly placed at random, and rarely hidden.

I'm not sure I have to reiterate my overall feelings on the game, since it should be pretty obvious.  The Mummy Demastered is far from WayForward's best work, and also not a very fun game.  It has promise, but fails to deliver in just about every way.  I wouldn't recommend it to metroidvania action/adventure fans.  Maybe if you really liked the latest movie, but even though I doubt it.  Well, at least it doesn't have a melee counter that you constantly need!


The Good:
Graphics and animation are good.  Some elements seem very appropriate to the setting and license.

The Bad:
Too many enemies; too much damage; hit, ledge, and jumping detection feel off; the death mechanic, and really just a lot of things, big and small.

The SaHD:
I shudder to think what the game would play like if it came out when the movie did.

(Review code for The Mummy Demastered was provided by the publisher)
Posted by The SAHD Gamer at 12:13:00 PM