I'm not familiar with Ittle Dew 2+, as I had not even heard of the first game.  Given that it was on mobile, PC, and Wii U, that's not surprising.  When I saw a screenshot of the sequel, I knew I wanted to play it.

If you have played the old (and awesome) top-down Legend of Zelda games, Ittle Dew will look very familiar.  Same perspective, similar idea.  As Ittle and her flying fox friend Tippsie, you must brave the eight dungeons to rebuild your raft, and continue your adventure.  The game also looks really good.  It mostly appears cel-shaded, but with a hand-drawn style mixed in.  Character portraits are very expressive, and the dialogue is pretty funny, too.  It obvious from the get go that the game doesn't take itself too seriously, all the way through the end credits.

As you wander around the island, you will fight many enemies.  Or, run past a lot of them, as I ended up doing.  Combat is pretty solid, save for the hit detection.  It feels like it was a bit too easy for me to get hit, especially when trying to attack foes.  There are weapon upgrades that give extra range to your attack, which helps this problem, but doesn't do much for the first couple of hours.  There is a roll, but the timing of it never quite clicked with me.  I could get it to work sometimes, but most times it just didn't work out.  It's also way too easy to fall into pits.  I lost track of the number of times I would just slide in, while feeling I had room.  That got annoying.

Besides your melee weapon, you eventually find a wand, ice ring, and dynamite.  The wand is not very strong, but gives you a distance advantage.  It's also really hard to aim.  Using the d-pad buttons on the switch, I could aim in the 8 standard directions without much trouble, but enemies could be at any angle.  Using the analog stick to precisely aim was a huge pain.  It reminds me of aiming in twin stick shooters, which is something I am really bad at.  So, if you are comfortable with those, aiming the wand might not be so hard for you.  The overly sensitive nature of the analog stick may be why I was filling into pits so many times.

The ice ring creates a block of ice, which can be pushed.  It can also damage enemies.  The range of the attack is abysmally short, because it's a ring, so I barely used it for that purpose.  It is the only thing that can damage the slime enemies, which thankfully you don't encounter very often.  The stick of dynamite is slightly more useful as a weapon.  You put it just in front of you, and it will explode after a short time.  If you have used a bomb item in any similar game, you will get the idea.  It's still not the best weapon, as you have to get close enough that the blast will affect the enemy, which can get you hurt.  At least the explosion doesn't hurt you. 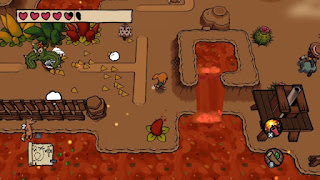 These weapons also double as puzzle solving devices, which is pretty neat and pulled off well.  The stick can hit switches and light fires (when the weapon itself is on fire).  The dynamite can destroy some blocks, but also trigger switches with a delay.  This is used more than you might think.  The blocks the ring makes can be used to depress pressure plates, which is absurdly useful.  The wand is used to hit switches from a distance.

While these may seem mundane, the way they work together is impressive.  You can hit the ice block and shave a part of it off, making a diagonal surface.  This allows you to reflect the wand attacks, or push it at an angle.  The dynamite can be frozen, giving you more time to move away before it blows.  The wand can also be used to move push blocks at a distance, or even diagonally.  That last bit tripped me up at a puzzle late in the game.  The puzzles are a decent spread of easy, medium, and hard ones, but boy are those hard ones difficult.  The dream world has a dungeon for each item, where you can only use that item.  Sadly, I can't figure half of them out.

While the map can be a pain to access (hitting the Minus Button on the Joy-con isn't really convenient), it is very detailed, and I like it.  Since so much of the game is exploration, all cave and building entrances are marked on the map once you find them.  Caves that link multiple areas are clearly marked, and if you find all of the stuff in a place, it gets a check mark so you know you don't have to go back there.  Dungeons get a little crown on them if you have found everything inside as well.  There are maps that tell you where some of the secrets are, and it marks these locations with an "X".  Overall a great map system.

The first half of the game felt very fast, which then slowed down in the second half.  Probably because I starting dying a lot.  Enemies do a lot of damage, which is exacerbated when they shoot out way too many projectiles.  Oh, and did I mention the projectiles have decent tracking on them?  Yeah, that's pretty dumb.  That's why I ended up just running away from enemies, as they started getting pretty cheap.

I took less than 8 hours to complete it, so it's a pretty short game, but there's good replay and speed run potential.  I didn't do all of the optional and dream dungeons, mostly because I'm not good enough to do them.  The dungeons can be done out of order, and there are shortcuts in each if you do so.  There's also lock picks that you can use instead of a dungeon key, which will be fun to see which ones people skip.  I'm actually very interested in seeing a speed run of this game.

Old school top-down action adventure fans should definitely check out Ittle Dew 2+.  It scratched a gaming itch I've had for awhile, and looked awesome doing it.  It had a few flaws that grew as the game progressed, but I ultimately enjoyed it.  If you want a fun game..."Ittle Dew".

The Bad:
Enemy attacks, damage, and sliding into all of those pits.

The SaHD:
So, are the health potions alcohol or something?

(Review code for Ittle Dew 2+ was provided by the publisher)
Posted by The SAHD Gamer at 12:55:00 PM