A new MMO has hit the scene in Gamindustri.  Gaining access to the beta, the four CPUs and CPU candidates take to the internet and create characters that...look justlike they do.  Oh, so they are those kind of people I guess.  Time for Cyberdimension Neptunia: 4 Goddesses Online.

I'm pretty sure this is a spin-off game, since it doesn't play like the core games.  It more resembles the hack and slash releases like Tagmension, but even then doesn't feel enough like them.  The areas are bigger than Neptunia fans have dealt with before, and the action takes place in the same environment.  It's all real time, too.  Like an MMO, you fight enemies, gather materials, and open chests.  Also like an MMO, the initial loading to start the game takes a long time.  Thankfully, most loading in the game is very short.

The controls feel off to me, and took time to get used to.  The Square Button is attack, and X is jump, both of which make sense to me.  Triangle uses an item, if they are set.  I'd like it better if you could cycle to "no item" even with some equipped, so you won't accidentally use one.  R1 locks on to an enemy.  It wouldn't be my preferred button, but I eventually got used to it.  Holding L1 brings up the skill pallet, mapping them to the face buttons.  R2 is block, and L2 is dodge.

While initially I thought the dodge would be useful, it doesn't seem to do much.  It's fast, but doesn't go far, nor seem to offer invincibility.  Blocking is much more useful.  It not only lowers damage received, but if you time it correctly, you will parry the attack, taking zero damage, and hit them back.  The timing for the parry doesn't seem that strict, and I was able to pull it off fairly regularly.  However, the block itself can be very fickle.  There were plenty of times I would hold the button, and not actually be blocking.  You can cut some attack animations with it, but many others leave you wide open, as you won't enter a blocking state if you press the button too early.  That's what annoys me the most about it.  It can also be hard to tell if you are actually blocking because of all the action and effects on the screen.  If I can see I'm not blocking, I know to press and hold the button again, instead of thinking I am and taking full damage.  Blocking and parrying were very helpful throughout the game, but could be made more reliable.

In addition to a control scheme that feels off, the jumping and movement are also finicky.  Both feel too sensitive, with slight movements making the character go farther than I intended.  It's very hard to do small adjustments.  Turning was almost the opposite.  Pushing in a different direction doesn't immediately have the character face that way.  Instead, they turn more toward the way, but not enough.  It's most pronounced when you barely miss grabbing a gathering point.  These are definitely some things I'd like to see modified to make movement feel better.

You can only directly control the leader, but you can switch who the leader is.  I wouldn't recommend doing it in combat, since you switch leader and party members through the menu.  Someway to quickly switch would be nice.  The other three characters are controlled by the AI.  You can vaguely direct what they do based off the AI settings, but that still leaves much to be desired.  They rarely block or attempt to dodge attacks, even if doing so will save their life.  Healers only really heal if people are under 1/3 their total HP, which may be too late.  It could be that sometimes they are out of SP, but without a quick way to switch to them, I rarely have time to check.  Setting them to behave like their class makes it a bit better, but they still die because they are low on HP and don't make an attempt to survive.  Since it's really hard and costly to resurrect someone in the field, I'd prefer they try and live instead. 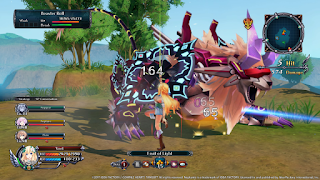 The environments themselves present some problems.  Many times I would get stuck on a wall, or small bump on the floor.  Sometimes the hang-up is when you try to jump, lowering the distance you will travel.  Enemies are really bad at realizing terrain heights, and sometimes just stand around if you are higher or lower than they are.  If they do attack, and you parry it, you can be sent off small ledges, which then negates your counter attack.  That's not a great reward for getting the timing right.

I had a few other problems during my time with the game.  I had one crash as I fought a boss, and I'm unsure why that happened.  It was only the once, and while I was annoyed that I lost 45 minutes of work, I can dismiss it as a one-off.  A few times during boss fights I would also get stuck in place.  I could still attack, but couldn't actually move in any direction.  It was really frustrating, and cost me a fight or two.  I eventually figured it's because I was using the awakening skill right next to the boss.  It somehow would trap me inside them.  It stopped happening when I realized the cause, but it's still a bad thing to happen.  Hopefully it gets rectified in the future.

When not in a dungeon, the town menu will look very familiar to Neptunia fans.  There are little chibi sprites of the people about town, and putting the cursor over them will have speech bubbles.  You can select the various shops, services, look for a guild quest, or view new events.  There's even a board for the multiplayer quests.  In a nod to Dragon Quest, you can only choose to save in the cathedral.  Other than that, that game auto saves when you go back to town.  Sadly, you only get this save, and cannot choose a different save slot.  I haven't had an issue with it, but I'm not a fan of just one save slot, and having that slot an auto-save in an RPG.

Half of the time, the story progression feels very fast.  You hit key points with speedy regularity.  The other half of the time, story progression is aimless.  You aren't really told what to do, and basically must resort to doing random guild quests.  After doing a few, a story event will appear, and you can proceed onwards.  It's a weird dichotomy that never feels right.  At least I only had to grind once or twice.  It's also one of the shortest Neptunia games, taking about 20 hours from start to end.  If you want platinum trophy completion, it's probably a few hours after that.

Overall, I think Cyberdimension Neptunia: 4 Goddesses Online is pretty fun.  I'd recommend it to fans of the Neptunia series, even though they have likely already played it.  It has some annoyances, and could use another layer of polish, but it's still pretty enjoyable.


The Good:
I enjoyed the story and presentation of the game.

The Bad:
Story progression feels aimless at times, the AI isn't great, and the controls took me awhile to get used to.

The SaHD:
I wondered why Blanc didn't create her character with big...uh, file sizes.  Strangely, they did address this in a side skit, which I didn't think they would have thought of.  Also, this game should really be Vert's.  While they make a joke about that, it's silly she still doesn't have one when the rest (and IF) do.

(Review code for Cyberdimension Neptunia was provided by the publisher)
Posted by The SAHD Gamer at 10:54:00 AM