Corpse Party: Book of Shadows is the sequel to the smash hit downloadable PSP game Corpse Party.  Thanks to XSEED Games, I can review it for you. 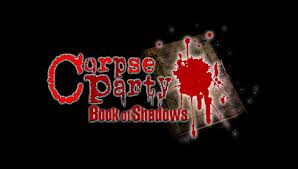 Corpse Party: Book of Shadows is like a "choose your own adventure" story in game form.  It starts off in the thick of things, quickly thrusting you into the story.  When a group of students get trapped in a hellish world, it is your job to try to help them.

Granted there isn't much motion in the game, but it looks really good.  I'm a fan of anime styles, so of course I like the look of the game.  Locations look tattered and creepy, although many of the hallway screens look the same or similar.  Most of the rooms you encounter are very distinct and very detailed, though.  The artists did a great job of making the rooms very unsettling, some of them containing several corpses or other forms of visceral matter.  When there are rooms labeled "Death Room" and "Body Pool", you know what to expect and won't be disappointed.  The scenery definitely sets the mood of the game.

The game follows the exploits of several students trying to escape and survive a decrepit, demolished school filled with malevolent spirits.  It's not a cheery game by any stretch of the imagination.  They will find items and other students that may help them escape the ever-shifting school and avoid whatever dark fate awaits them.  It's kinda depressing, since with all the bodies, you don't get the impression many people survive.  A few parts may make you uncomfortable, but I don't think it's too bad for a mature audience.

Each chapter opens up with lots of story to set up the main character you will guide through that part of the game.  These can get fairly long, but they do a great job of fleshing out the characters and giving them backstories.  There are lots of characters in the game as well, so there can be long sections of exposition.  One problem I had was you don't often see a good picture of who you are playing as, so it was hard to keep track of who I was and how they related to the other characters.  I unfortunately have not played the first Corpse Party, so I don't know what characters return and if they were covered in that game.  This is something I'm going to look into, since there is a very interesting story being told.

In a few of the chapters, the perspective switches and you control another character for a time.  You can usually tell this if your "Darkness" meter is at 0% and doesn't move.  Since I had some trouble picturing who I was playing as sometimes, this could be a little jarring.  I kind of wish that the separate people you played as each had a chapter so the player could piece together how they all intersect, but it's fine.  Playing as several characters has an upside, namely seeing Heavenly Host Elementary and its horrors from different perspectives.  Jumping characters also helps flesh out more of the people trapped there.


The game plays like part digital novel and part point and click adventure (think The Walking Dead).  In between the story parts, you control a character and make your way through the school in an attempt to survive.  There is lots of wandering, trying to find an item or run across a person to continue the story, and a few times I was a bit lost.  While it might be annoying, I liked it since it felt more realistic.  If you were trapped in an unfamiliar place, you would probably do lots of wandering, trying to find things or people that would help you escape, too.

Corpse Party: Book of Shadows is good.  I like playing it, although it would feel odd to say it was fun, given the atmosphere the game sets us in, it was fun to play.  There's also things to collect, namely student ID tags from the deceased and the different endings.  I felt weird, but I would get excited to see a body and get its ID tag, since I do like collecting in games.  I also would save a lot so I could try for the "wrong ends" in an attempt to get them all.  Another great thing: the game is on PSP (or Vita), so I can play without disturbing the little ones, since this game easily earns its M rating.

There are 7 chapters, and easily over 12 hours of playtime.  I recommend saving in several slots, so you don't get stuck and can mess around to get several endings.  I only had to restart a chapter once, but it was fine since you can easily fast forward through the dialogue and get back to where you need to go (a great function if you ask me).  There's also some good replayability, to collect things and replaying a chapter may give you insight that you missed the first time.  If you like lots of story, horror movies or even old school point and click adventures, I'd recommend getting Corpse Party: Book of Shadows.  It's creepy, scary and fun.  If you can, you should probably start with the first.  Headphones are also a great way to experience the game, although I'd say turn off the lights at your own risk...
Posted by The SAHD Gamer at 2:20:00 PM