The Silver Case was Grasshopper Manufacture's first game.  Originally a Playstation game released in 1999, it was recently remastered for a PC release, and now it's on the PS4.  The game is a crime drama adventure game split into two parts, Transmitter and Placebo.

Transmitter follows the main character (that you name) and their story through 7 chapters.  While the stories don't always appear connected, they are in sometimes obscure ways.  I was able to follow most of the plot, but a few points escaped me.  Some of these are things addressed in the Placebo portion of the game.  Placebo only has 5 chapters, stars a different character, and gives a different perspective on the happenings of Transmitter.  As already mentioned, it fills in a few gaps, so it isn't as ancillary as it first appears to be.  Also, finishing all the cases on one side unlocks a bonus one for the other, which is new content not from the initial release.  Sure, they are really short, but new is new!

Being a Suda 51 game, you know it has to be dripping with a unique style.  In that respect, The Silver Case doesn't disappoint.  Part of the game's style is the background imagery.  There's lines, letters, symbols and other things floating around.  At first it was really distracting, but once I was used to it, I thought it was pretty neat.  Plus, it helps that every chapter had its own color and thing going on in the background, making them all feel unique.

In addition to that, there are also a myriad of ways the game shows things.  Many characters have portraits (that are different for the two "sides" of the story), there are still images, 3D models, animation and even some live action videos.  It's all kind of crazy, but since it uses them at least a few times each, it kind of works.  There is little spoken dialogue, so the game uses a text noise when writing the dialogue.  It actually has a few different noises, which is nice.  However, it just kind of cycles among them, instead of having certain people's sound one way, as a way to differentiate people from others.  That would have been cool.

When you aren't scrolling through and reading dialogue, you will likely be moving around the game's limited 3D environments.  These sections are the weakest part of the game.  It's also the only "gameplay" you get, which is what makes it an adventure game and not a visual novel.  Anyway, the controls for them half make sense, but are still jumbled.  I get the movement, but selecting what thing to do (movement, system, etc.) with the wheel feels very cumbersome.  There's an alternate way, where you hold the L1 button and use a face button, that feels more natural.  One of the characters even points out that it won't makes sense, but that you will get used to it.  They don't say that it gets better, mind you, only that you'll accept it and move on.  While these sections aren't fun, in the Placebo story, they feel superfluous.  Many times, you basically move a square forward and interact with something to advance the story.  I guess it at least gives you time to save. 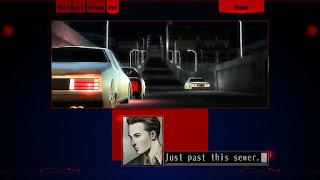 Early in the game, my dislike for these sections was cemented.  I was moving around in the first room you can move in, and I couldn't go anywhere.  I examined what I thought it wanted me to, but all I could find was a door it wouldn't let me though, a panel that I could type stuff in, and a blurry picture that seemed like it would be important if it was legible.  After about 10 minutes, I found a comic book near the ground.  "Ok, great the game is going to have collectibles during these parts," I thought.  I wandered around for a few more minutes, just not understanding what I was missing.

Then I tried to walk though the door again.  And it worked.  "What?!" I yelled (actually, there were more expletives in what I yelled).  I apparently had to pick up a silly and useless collectible in order to go through the door.  Sadly, that wasn't the only time I would not know what to do, only to find out it was look up or down on a specific panel and a specific direction.  Sigh.

In the Transmitter half of the game, several of the 3D sections have puzzles to figure out.  The first ones I came to didn't really give any indication of what I was supposed to do (remember that panel I mentioned?), and being already confused, I didn't know what to do.  There's a little magnifying glass icon, that when hit, solved the puzzle for me.  So what was the point of actually doing it?  I don't know.  After completing all of those ones in the same way, I figured out what you were supposed to actually do to solve it.  On one hand I think it's silly to just easily give the solution like that with no penalty, but on the other I appreciate that you aren't stuck when they just dump a puzzle on you with no explanation.

The other puzzles don't have a button to solve it for you, and they aren't very hard when it comes down to it.  I will admit I got stuck several times, but it wasn't usually because of an actual puzzle, but more that I didn't know what part of the area I was supposed to walk to, or look up or down or something else that feels pointless.  Luckily getting all the questions right in the 100 question kumite isn't actually a puzzle, since that wasn't going to happen.  (Apparently, they always ask in the same order, meaning a guide will get it done.)

While I do have some big problems with The Silver Case, I think the story is interesting.  There are parts that don't feel as well explained as they should be, and there's a few twists that feel unnecessary, but I enjoyed it overall and kept playing to find out what was going to happen.  I'd enjoy it more as a visual novel, since the movement sections were far more painful than they should have been.  The style is the game's strongest point.  Still, if you are a fan of some avant-garde design and story telling, The Silver Case is worth a playthrough, especially if you have played any of the related Suda 51 stories.

The Bad:
The 3D environments.

The SaHD:
One of the characters nicknames the main character "Big Dick", which makes for some hilarious lines...which I unabashedly took screenshots of.

(Review code for The Silver Case was provided by the publisher)
Posted by The SAHD Gamer at 10:03:00 AM