Endless runners is a genre usually withheld for mobile gaming platforms that are free to play and offer many microtransactions.  There have been a few released on consoles, even ones that are sold as complete games.  Mechrunner is one of the latter, and you... play as a transforming mech?!

When you start out, you get no real explanation of what's going on.  Just start the game and you're in.  Well, I'd recommend looking at the controls first.  There is a backstory to the game, you just have to play far enough to buy/unlock the movies that explain it.  It's a weird decision, since I would like some context for this game world, but I'm sure many people just want to jump into the action.

As most endless runners do, you mostly move forward, making your way down the war-torn streets, destroying enemies and rescuing civilians (except that poor dude at the start).  When you do encounter an enemy, you stop moving forward and the view zooms.  If you are hit by either enemy attacks or obstructions in the environment, you will take damage.  If you run out of health, it's game over.

You can either be the mech or tank form, and the Triangle button switches between them on the fly.  The mech has melee blades that can cut up enemies, and a gun that you can aim.  Unfortunately, you can only aim while shooting and for a bit afterwards.  It would be much easier if you could aim before hand, so you wouldn't have to waste shots.  Even though you have infinite ammo, the mech's guns overheat as you shoot them, and have to recharge.  It's actually a pretty big pain, simply because its guns aren't very accurate or strong, and just about every enemy is outside of the sword's range.

The tank, on the other hand, is far better.  It can shoot missiles and its dual cannons.  These can't be aimed manually, but the missiles have some tracking ability and it isn't really a problem.  Plus, they don't overheat, so you can spam the triggers the whole time, which is stupidly effective.  Once I quickly figured out the stay in tank mode 95% of the time, the game got much better, and easier.  The only time I change to mech mode is to finish off a stunned target after a battle, since you get more protoenergy (currency) for doing so.  Oh, and to slowly work toward the associated trophies.  You can also hold the tank's shots to charge them up, but I didn't really need to, nor see much reason to, since spamming the shot kills things rather quickly.

There are some random pick-ups scattered through the game, which you can use when you want (you can only hold so many, though).  They are all pretty useful.  There's a healing one, that you have to actually activate.  I didn't know this for awhile, and thought they would replenish some health when you pick them up.  There's one that makes your missiles stronger (I think).  It's a bomb icon, so I thought it gave you a screen clearing attack or something, which would have been cool.  The last one is the shield, which will protect you from damage for a short time.  This is invaluable.  It not only makes difficulty enemies trivial, it helps with some of the cheap hits you get when the endless running speeds up. 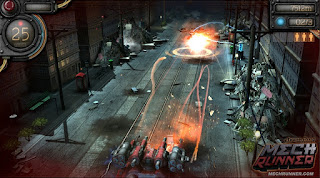 Killing enemies and gathering the protoenergy will give you experience and money.  As your level increases, you can buy new upgrades, skins and areas to explore.  Most of the unlockables require the protoenergy, so you will be grinding a lot to get the amounts you need, and to reach the required level.  At least that helps work toward many of the trophies.  Strangely, the movies that explain the story of the game are in the upgrade shop, offering you a small glimpse every 10 or so levels.

There are a few problems I have with the game, though some are minor.  One, you can only pick up civilians in the tank.  Sure, I quickly realized this when it didn't work when I was the mech, but it would have been nice to be told, or have that loading screen tip come up way sooner.  As mentioned earlier, the mech form is almost useless because the tank is so much better.  Plus, having the shooting on the triggers makes sense, but gets to be a real pain if you play for too long.  Spamming them to shoot fast makes the game easier, but cramps your hands after a bit.  I would think an arcade stick would be great for the game, except for needing the right stick the few times you might need the mech's guns, and having to need both the d-pad and the right stick for the menu and moving respectively.  As for mashing the triggers a lot, a turbo controller fixes that right up.  (I won't tell if you won't.)

Being an endless runner, you don't really "beat" the game, as it just keeps going.  There are different areas that you can unlock, but you transition to them during your run, as opposed to being an actual different stage.  It's a pretty neat effect, but having it as different actual stages would have been cool too.  Hit detection for your tank/mech seems a bit off most times as well, which really shows when things speed up.  My biggest problem is the many cheap hits the game has.  As an example, there are many times where something drops in the only place you can go to avoid an obstacle, which means you have to take damage.  Also if an enemy is behind an obstruction and stunned, closing in to slice it up will damage you.  Yuck.

Overall, Mechrunner was pretty fun.  I'm glad the game isn't a free-to-play microtransaction trap, but instead a low priced release.  It's good for a pick up and play game for a few minutes at time, but you might cramp up your hands playing it too long.  It could use a bit more polish, but it was definitely worth the several hours I put into it.


The Good:
Cool mech design, easy to pick up and play.

The Bad:
Mech is nowhere near as good as the tank, spotty hit detection, cheap shots, and can cramp your hands after awhile.

The SaHD:
Can some make an actual transforming toy of the mech in the game?  Maybe on Shapeways?  I'd love to get one.

(Review code for Mechrunner was provided by the publisher)
Posted by The SAHD Gamer at 11:41:00 AM