I had a lot of fun playing Akiba's Trip on the Vita and the PS4.  It was a unique action RPG where you defeated synthetic vampires by ripping off their clothes, exposing them to sunlight.  It was goofy and fun.  This made me eager to get my hands on the sequel, Akiba's Beat.

After starting the game, I quickly realized this has very little to do with the previous game, so I guess it's more of a side story rather than sequel?  The story is set in the same place, but involves no one from the first, and the battle system is completely different.  Gone is vampire stripping and in its place, battles straight out of the "Tales of"series.  You fight on a 3D plane, and pressing left or right toward your target will move you toward them, and the opposite direction moves you away.  Holding L1 allows you to free run, which I found very useful for 90% of the game.  Dodging wasn't as reliable as just running away or around targets to avoid attacks.  Plus, the dodge button was either not responsive, or too much so.

You have an AP number, which dictates how many times you can attack before you have to stop for a few seconds and let it fill again.  Even if you have more than your standard attack string, you will pause after it, unfortunately.  Attacking while holding up or down will do high and low attacks respectively, which mixes up what you can do.  Pressing the special attack button with different directions on the left stick can also give you different special moves, which you set in the menu.  Thankfully, you can set another set on the right stick.  I like this since you get so many useful moves, that one set isn't enough when at the end of the game.  You can also set the buttons in the options, which I did since early on I mixed them up often enough.  Like the dodge button, the attacks weren't always responsive either, and not just because I ran out of AP.  It's a fairly big deal in such an action heavy battle system, and was pretty annoying.

Fights with normal enemies tend to be over very quickly, as quick as a few seconds early on.  This is nice, since it means you can usually make your way through the dungeons without sacrificing an afternoon.  Then come the boss fights.  The first two are longer than normal fights, but not by a lot.  After that, the bosses become standard JRPG massive HP slogfests.  Toward the end, I was dreading the thought of duking it out with dungeon bosses, simply because it would take several minutes of mashing attacks.  This gets compounded when they start having two boss fights back to back, which sadly happens more than once.

However!  As you do damage, you build up the Imaging Gauge.  When you do, you have infinite AP for a few seconds, and your damage is increased.  If you use it when the gauge is fully filled, your damage increases as you land attacks, and it lasts for the duration of the song you equip.  Near the end of it, the percent jumps up, and you will output a lot more damage than normal.  The Imagine Gauge is way too strong for normal fights, and does make boss fights a little shorter.  Still, I would have liked it to be more effective on the dreary boss encounters, or even do something great like making casting instant, or even making special moves free/cheap.  Bottom line: it works okay, but could be more interesting. 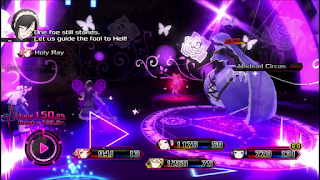 The story places you in the role of Asahi, a career NEET that does little but stay up late, watch anime, and play games.  I'm pretty sure I went to college with someone who lived like this and also woke up at the crack of 2pm, but I digress.  Progress is broken up into two parts, one where you run around the map, talking to people, and another where you traverse the dungeon, fighting monsters and then the boss, dissolving the delusion.  There are times where you go into the dungeon in the middle of the talking parts, but it's still a back and forth between these two scenarios.  It's not the best balance, since sometimes the running around and talking is a bit long, or the dungeon is, but the fast travel can help with some of that.

As for the story itself, it starts off pretty strong.  Then toward the middle of the story, it starts to go down.  A chunk of that is from my own pet peeves.  I won't spoil things, but one character that behaves a certain way does something that doesn't make sense in context.  Sure, they try to explain it later, but I still think it just doesn't work.  There are other instances, like when the main character has their stereotypical "doubting themselves" arc.  Again, it just doesn't work with how it is presented.  It could, and I get what they are going for, but it's just not pulled off well.  Also at the end they shoehorn in some nonsense, and stuff in some more to pad the length a little too much.  It's a shame the story went so bad for me, since the localization and the dubbing are top notch...probably the best I can remember in an XSEED game.

The dungeons in the game are pretty basic, just rooms connected by hallways, all very block-like.  Some have switches to open doors, and there are treasure chests to find.  Later dungeons get pretty long, but thankfully, several floors are shorter on repeat visits.  Any shortcut is welcome because they get a LOT of mileage out of these dungeons (so get used to seeing them).  There are also enemy encounters littered throughout the dungeon floors.  Getting the spacing and timing for the first strike is a bit of a chore, but it helps.  Assuming it works, as I've had times I was back attacked while facing the enemy.  While I'm usually okay with palette swaps of enemies, Akiba's Beat goes all in.  There aren't many types of enemies, and you will see most of them in all of the dungeons.  I remember remarking to my son when I finally saw a new enemy type after 30+ hours.  The boss designs are pretty good, though.

The story and side quests took me over 60 hours to complete.  If you cut out the side/character missions and the monster killing quests, you could shave some time off of that.  Even so, the main story itself went on for about 10 hours too long.  It felt like the third Lord of the Rings movie, where there were several places it could have ended, but didn't.  It really could have cut out the last chapter or so, and be a much more concise (and better) story.  Admittedly, you will get your money's worth completing the game because of this.  I'd say it's worth trying for "Tales of" fans, but fans of Akiba's Trip should know it isn't really anything like that game.


The Good:
If you like "Tales of" combat, the fights will make you feel right at home.  Good references, localization, and voice acting.

The Bad:
Story goes down as the game goes on...and it lasts longer than it logically should.

The SaHD:
My favorite reference had to be the sequence from the children's trading card game.

(Review code for Akiba's Beat was provided by the publisher)
Posted by The SAHD Gamer at 3:04:00 PM