Hakuoki: Kyoto Winds is a visual novel set in Kyoto, Japan in the mid 1860s.  It stars a female protagonist searching for her father.  She quickly becomes a "guest" of the Shinsengumi, and the story unfolds from there.  Kyoto Winds is also a remaster of the previous Hakuoki, which came out a few years ago on the PS3 and Vita.  The story has been partially reworked, adding more minor characters and romance-able targets for the leading lady.  Sadly, the story has also been split in two, and this is the first part of it.

The story is pretty entertaining overall.  You interact with many different characters, which feels more logical for such a big group, as opposed to cramming all the characters into every scene.  There's also a fair amount of voiced dialogue.  Of course I expected some, but with so many characters, I expected less than there ended up being.  If the dates in the game match up with historical dates, it would make sense why there are sometimes big jumps in time (up to about a year) during the story.  Otherwise, it would be kind of strange that a lot of things happen in a month or two, but then nothing for the next four months.

Many points in the story will task the player with choosing an option which affects how the story unfolds.  Some of these make big differences in the short run, but in the long run, the story unfolds in much the same way.  Since the story is based on historical events, it makes sense that that would be the case.  Sometimes the following scenes feel a bit disconnected from some of the choices.  Basically, there seem to be better options to make the story flow perfectly, but you don't have to do that.  What your choices do greatly affect is which characters you can raise your relationship with.  This, in turn, changes which final chapter you get in the game.

When I say "final chapter", I don't mean the story's conclusion...yet.  It's only the first half of the entire tale.  This was a bit of a disappointment.  The breaking point is a pretty logical one (at least in the routes I did), so it isn't some awful cliffhanger to leave you waiting for the next part.  With so many different last chapters, I'm curious to see how the second game deals with that at the start. 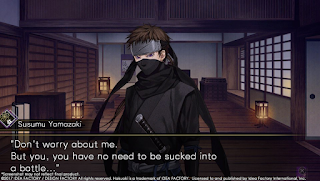 Like most visual novel games, Hakuoki runs about 4-6 hours for your first playthrough.  There are several points where a different choice will change parts of the game, plus a route for each of the characters gives you some good replay value.  Finishing the game once allows you to choose at what point to start at, and then select one guy to set the relationship at high or low.  This makes it easier to see the alternate routes without having to skip through parts you have already seen.  Plus, when you come to a choice, previous selections will be marked with different font color, which aids in choosing another.  While a lot of this stuff should be standard in visual novels, I'm still very happy that it's included here.

If you think it would be hard for a guy to play and enjoy an Otome game, you would be mistaken.  Hakuoki: Kyoto Winds in an interesting story that is unfortunately split in two.  That is made better by the fact that it splits in a logical place, and with so many different ending chapters, has replay value for hours, even if you have to wait for the full story to conclude.  Visual novel fans should definitely give it a try.


The Good:
Interesting story with some nice twists, and plenty of ending routes.

The Bad:
Having to wait for part 2 to finish the story.

The SaHD:
I've seen Ruroni Kenshin, so I recognize a few of those names.

(Review code for Hakuoki: Kyoto Winds was provided by the publisher)
Posted by The SAHD Gamer at 11:15:00 AM