The Fall of Cobra

So, the new G.I. Joe movie?  It's been delayed for about 9 months.  I assumed for maternity leave, but not so.  They claim to want to add 3-D, but that doesn't take that long.  Likely they don't want to compete with other summer movies.  I haven't seen Battleship, and don't plan to, but G.I. Joe was probably as good as that, and Battleship....well, sank.  So they are likely to rewrite stuff.  According to one article I read, they are adding in some more story with Duke, and not killing him.  Good call, I guess.  The first movie was mediocre, but I didn't like the idea from the trailer that they just killed off everybody but Snake-eyes and the Rock.

Why not release it on its original date?  Then when people stop going, just add in the 3-D.  People will pay a few extra bucks for that right?  I mean it works with games.  Just like this: 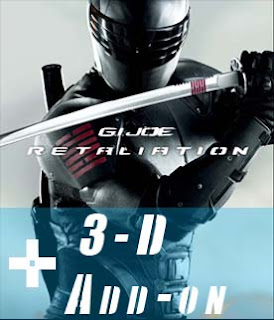 Then, a few months after that, say when the 9 months are up, just sell this to moviegoers for a few bucks. 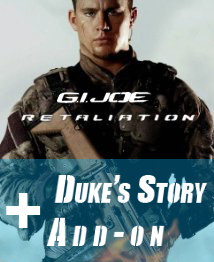 You know, I could be on to something here.  It's not hard to see where this culminates.  When released on video, bundle them all together for the G.I. Joe: Retaliation MotY (movie of the year) Edition!

To be clear, I'm okay with the idea of DLC, just some of the execution could use some work (read: less greed).  I don't think this would fly in any other form of entertainment, so hopefully this doesn't ever happen to movies or TV shows.  But I know my wife would buy a Tom Baker add-on costume for the latest Doctor Who so she doesn't have to see Matt Smith.  Now I might be on to something...
Posted by The SAHD Gamer at 8:49:00 PM