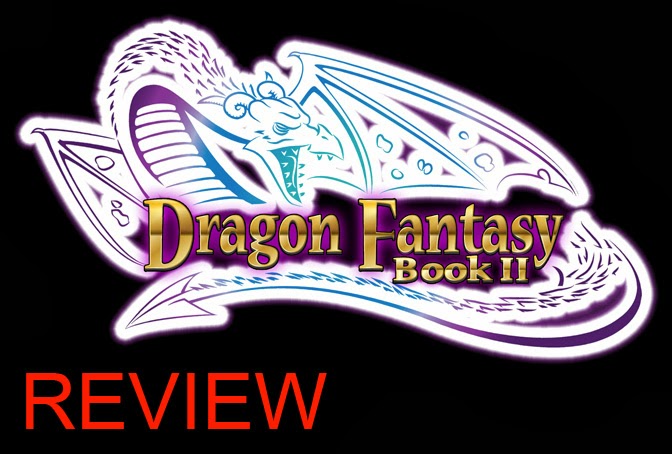 Earlier this year, Dragon Fantasy: Book 1 was released on the PSN, and paid homage to classic RPGs from the NES era of gaming.  Book 2 draws its inspiration from the next generation, mostly Chrono Trigger, with some more from Earthbound and even Pokemon.  The Chrono Trigger inspiration is easily seen when you look at the game.  As opposed to the previous game's first person perspective, the game now shows all of your characters on the map and in battle, and all of the enemies appear as you move around.  If you don't like random encounters, you'll appreciate the way this game does it.

The battles will take place where you start the fight, which is both good and bad.  Good because it just feels more fluid, and you can sometimes maneuver an encounter so the enemies are bunched up.  Bad because sometimes the enemies really spread out, occasionally ridiculously so.  Also, wandering enemies can and will join the fight.  Early on, this makes some battle much more difficult than they have to be.  In a nod to Earthbound, if you are significantly stronger than the enemies, starting an encounter will have the main character "SMASH" them, winning the fight instantly.  This does get you full Exp, Gold and Items, so it is basically just saving you time and the enemies' embarrassment.  Enemies will not respawn until you leave the dungeon, which is helpful when making your way through it (or back to the save point), but less so when you want to grind or missed catching a particular bounty (more on this later).  For good measure, there's even two ship battles, where you must grab rock monsters to launch at the enemy ship.  They are pretty fun, but it would be nice if there were more than two, or a way to repeat them later in the game.

The skills and spells you get will give you some variety in hitting all of your foes.  You get some single target ones, a few ones that target a line and a lot that hit a radius (both small and larger).  Seeing some of these skills and hit boxes will really remind you that this game was inspired by Chrono Trigger.  Skills and spells will, of course, take MP, but after a few levels you won't run out quickly.  The effects are much better than the previous game, and all characters and enemies have animation to go along with their movements and attacks now.  I'd say that all of these things make the look and fights of the game better, even if enemies adding themselves to the fights gets annoying.

Is killing enemies the only option?  Not quite.  You can also capture them, and they will serve as party members (now you see why I said there was a little Pokemon thrown into the mix).  This is almost necessary for the parts of the game where a character will be without the rest of the main party, so make sure to carry a few capture nets for good measure.  Monsters you capture will have a different name that usually goes along with their class/type or what they are in reference to (the thief's name is Robert Heif, for example).  They also will likely have a unique skill or two, and then learn the same pool as other monsters you capture.  Monsters have low MP, but the skills they use are cheap.  Adding them to your party is useful to fill its ranks, but they just don't perform as well as the named characters.  It is fun to catch them all, though.

Last time, the story was told in 3 separate chapters that could be started in any order and all fit into an overall narrative.  Dragon Fantasy: Book 2 picks up where the third chapter left off, as our heroes are taking a boat trip.  After about 2-3 hours, you will be given a similar choice, all of which tie together.  It's a nice way of giving some freedom to the players while still maintaining a strong, overarching story.  I think it's pulled off very well, and many times I kept playing because I wanted to see what was going to happen next.  While it overall feels slightly more serious than the last game, there is still plenty of humor.  There is lots of silly dialogue, enemy names/attacks and tons of references to gaming/RPG culture.  You may know from my other reviews that I'm a fan of things like that, so I like that aspect of the game.  For me, the story and the parodies/jokes are solid and enjoyable.

There are a few diversions from the main story if you are so inclined.  Besides catching monsters, there are several side quests called "bounties".  Completing these will give you some money and usually an item.  Bounties come in three flavors: capturing a certain monster, killing a certain monster and examining a certain location for an item.  They aren't very hard or out of the way, so there's no reason not to do them.  Completing the story and about half of the bounties took me 13 and a half hours, so it is longer than the first game, which is a plus.  Cleaning up the trophies and the remaining bounties took me another 5 hours.  Thankfully, I was able to make my way through the story without the need to grind, so the balance of the game is good, too.

There are a few downsides to the game as well, as it is lacking some polish.  For a week, one of the bounties was unable to be completed.  There are ways to make NPCs slide along a line, sometimes even off the map.  At first, auto-saving on the PS3 would make movement really lag.  The Vita had it slightly better, where the auto-save would have the game sit on a black screen for a few extra seconds, but had no lag while you could move.  However, Woodsy's final spell, Metios (maybe my favorite reference in the game, right down to the MP cost), would turn the game into a slideshow on the poor Vita.  The silver lining to this is the developers are still working to polish the game, and talking directly to the community for feedback.  Problems are fixed fairly quickly, which was a great thing.

If you are a trophy hunter, or just disappointed that the previous game didn't have a platinum, you will be happy to know that Dragon Fantasy: Book 2 does feature a platinum for your efforts.  You will get a few trophies for story progression, and a few for doing side quests and capturing monsters.  Be aware that capturing 50 different monsters can be almost impossible later in the game if you haven't been grabbing them when you can during the story (because of the SMASH described above).  There's also a trophy in the beginning that's easy to miss, where you have to fight a Rock Man (who's Mega powerful) so it can be captured a little later.  The only grinding trophy is to get a single character to lvl 99 (no, using a captured Nugget doesn't count).  Fighting solo will get this much faster, and you can use that character to finish the final boss solo and claim that gold trophy for your collection, too.  Not too bad a list, as they are all obtainable.

Fans of 16-bit era RPGs should check out Dragon Fantasy: Book 2.  While you will get more out of it if you have played Book 1, it's definitely not necessary to have played that to enjoy this game.  It is a lighthearted take on RPGs that we know and loved, with a decent story to boot.  While at launch the game was lacking some polish, this will be less of a problem as time goes on.  The music is pretty catchy and the graphics and animations are pretty good.  Save for a few instances, the game played well on both PS3 and Vita, and you can use the internet to transfer your save file from one to the other.  There's even some multiplayer coming to the game soon, which I will update the review with when I get a chance to check it out.  Dragon Fantasy: Book 2 is fun and I look forward to Book 3.
Posted by The SAHD Gamer at 11:59:00 PM