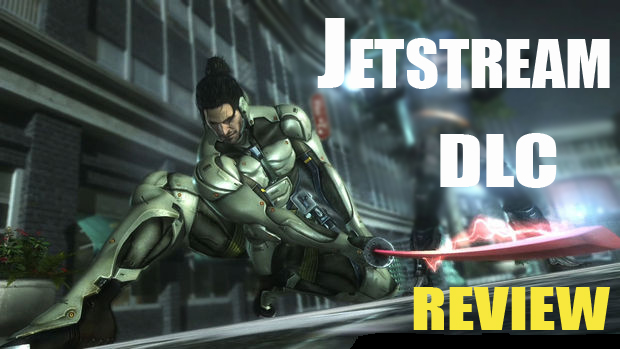 The base game of Metal Gear Rising: Revengeance was fun, sometimes hard.  The new DLC, Jetstream, allows players to play as Sam, "the Brazilian Wind", in events leading up to the main game.  This is a good way to flesh out another character while still keeping the story true to the base game.  Story-wise, I am a fan of playing as the villain at some point, since it gives another perspective on the events of the game.  Granted this is more prequel than another perspective, but it is still something that interests me.

Just like the base game, the graphics are great.  The controls are pretty spot-on.  The difficulty still seems all over the place and the camera is still horrible.  So what does the DLC do differently?  Thankfully, Sam plays a little bit differently than Raiden.  He cannot do the "ninja kills" (unfortunately), but can taunt and you can charge his strong (triangle/ Y button) attack for his unique "quick draw" skill.  I like the attack, but I found it hard to use, since enemies don't like to give you time to charge it.  If you could hold the attack until you let go of the button, I think it would be better to me, so I could charge it early.  As it was, I would frequently get attacked while trying to use it.  I also realized too late (just before the end boss of the level) that the charge attack was really effective on most of the enemies I struggled with.  Taunting is supposed to make the enemies more aggressive, which is crazy since they are already pretty bloodthirsty.

Sadly, I struggled a lot with some of the fights in the DLC level.  At first it was working off the ring rust and remembering the timing of the parry.  Once I was better at the timing, it seemed like the parry just wasn't as effective.  Enemies tended to jump out of the way (or counter parry) more than I remember in the base game of Revengeance.  Also some of the more damaging attacks will hit you when you are on the ground, leading to more damage and frustration.  The enemies are pretty competent killing machines.  As mentioned earlier, I found out near the end that the charge attack seems to be the cure to those woes, so I should have practiced that instead of parrying.  Doh.

That said, there were still fights that were incredibly hard (and of course the camera didn't want to cooperate).  The sword and rpg wielding solders were ridiculous, but are a lot easier if you can land a quick draw on them.  The big gorilla-like soldiers were a lot tougher than I remember them being in the base game, and the quick draw didn't seem particularly useful on them.  The hardest fight by far is against Blade Wolf.  I'm really confused as to why they put one of the most aggravating fights from the base game in again.  This time it seems even harder, since I was only able to effectively parry one of its moves.  The only strategy I found that worked for me was to spam the dodge (square + X) and attack quickly during the way too brief moments it stopped moving.  This took a bit, I still needed the auto heals, and it hurt my hand.  The other two bosses weren't nearly as bad.  Sure, the final boss took 2 or 3 tries, but it still wasn't as bad as Blade Wolf.

The Jetstream DLC is one long level.  My total completion time was just over an hour and a half, but you may know that it doesn't add the time if you die and continue, so it actually took me almost three hours to complete.  The trophies it adds will take a lot of effort, since there is a speed run on the hardest difficulty and beating the last boss without taking damage on hard.  Yikes, not ones I am going to get.  Thankfully there isn't one for doing the VR missions, since Sam's are accessed during the mission.  I wish they were just unlocked and not "do them right here and now".  I was pretty bad at them, since I only ran across combat-related ones.

If you loved the base game of Metal Gear Rising: Revengeance, welcomed the challenges, and ran through multiple times on the harder difficulties, you will like the Jetstream DLC, and likely get your $10 worth.  It offers enough familiarity (good and bad) but adds in some new mechanics to keep it fresh.  If you are a beat it once and leave it kind of person, you may want to wait for a sale.  Either way, it's a good addition to the game.
Posted by The SAHD Gamer at 1:38:00 PM