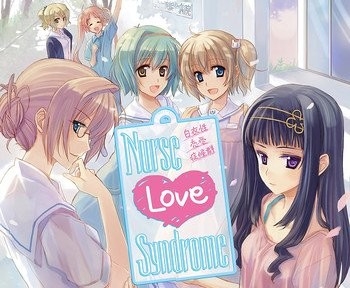 In case you were wondering, I still enjoy visual novels.  Being able to lay down, or relax for a few minutes while reading a story is definitely nice.  It doesn't matter if I'm playing as a guy or girl, as long as the story is interesting and enjoyable.

Enter my latest rental from Gamefly, Nurse Love Syndrome.  It's basically a spiritual successor to Nurse Love Addiction, a similar visual novel.  The previous game was about a young, dumb girl going through nursing school to fulfill her life-long dream of being a nurse.  This time, you are a different girl, who isn't quite as dumb as the last one.  She's already passed nursing school, and is starting her first day at her new job.

As you go through her daily life, you meet her co-workers and some of the patients she deals with. There are choices to make along the way, which influences which of the ladies' character routes and endings you will get.  That's right, just like the previous game, you are a lady romancing other women.  If you have a problem with that, then you have your own issues that you need to work out.  That's outside the scope of this review, though, so let's get back to it.

When trying to steer yourself onto a certain route, some choices are more obvious than others.  Some don't seem right at all, yet are.  I was able to get onto my chosen path the first time, but could not reach the good ending because I needed to complete two other good endings first.  Also, the routes for one character aren't even available until after you have done one playthrough.  Lots of different saves and consulting a good walkthru are recommended.

The stories are decent.  Unlike the previous game, there's not really a present end goal, like the graduation.  Therefore the story tends to amble along, slowly introducing a few tidbits until it ramps up toward the climax.  Such a format makes several slow parts to slog through.  The endings are a bit of a mixed bag, too.  "Good" endings are the only positive ones, because even the "normal" ones felt unsatisfying.  There's no "true" endings, just "bad" ones with quite dramatic finales.  It's not as out there as the story developments in the previous game, thankfully.  Though three of the good ending drag on a bit too long for my tastes, as they each have their own mini story arc after what feels like the conclusion.  Yes, really.

Overall, Nurse Love Syndrome is okay.  It's not the best visual novel I've played, but not the worst, either. There are some grammar mistakes that may have been fixed in the patch I didn't want to download. The story has interesting parts that are paired with long stretches of day to day stuff.  I can't fully recommend it, since there are better visual novels available, but it isn't necessarily one to avoid.


The Good:
Plenty of playtime going through the different routes, with some interesting bits of story.

The Bad:
Several lulls in the narrative.

The SaHD:
The scene cards between scenes are very cute.

(Nurse Love Syndrome was rented from Gamefly's service.)
Posted by The SAHD Gamer at 8:43:00 PM