Everything old is new again.  Ten years ago, Atari published the Ghostbusters video game, reuniting the original cast to voice their respective parts, craft an original story continued from the movies, and was even written by Harold Ramis and Dan Aykroyd.   Originally released 20 years after the second movie, the game has now been remastered on the eve of 35 years of the franchise.

While it's not as exciting to me as an Ecto-1 themed Transformer, I was eager to play the game again. I bought and still own the original on my Xbox 360.  Why not try it again with a shiny, new coat of paint?  For better or worse, that's what this "Remastered" is.  It looks nicer, but no other additions are present.  No new levels, modes, or anything like that.  On the contrary, the buggy multiplayer mode has been cut out entirely.  According this article, it should eventually be patched in after being re-built from the ground up, but it's certainly not there yet.

The gameplay is the same as the original release, but since I haven't reviewed that, I will cover it here.  You are the newest Ghostbuster, and must join forces with them to...what else, bust some ghosts.  The game dubs this as "zap 'em, cap 'em, and trap 'em", which is fairly accurate.  For the ghost enemies, you must start by zapping them with your proton stream or one of the other 3 weapon types.  Some are more suceptible to the different attack types than others, but the basic gist is to hit them and do damage.  Once their "health" is down enough, you can capture them with the proton stream.  A trap is thrown out, and the ghost must be lead into it.  Ghosts struggle while being captured.  Slamming them around will stun them and make it easier.  Despite the proton stream being appropriately inaccurate, the whole thing feels very satisfying.

That's all well and good, but the game isn't perfect.   While trapping ghosts can be fun, it can be a bit much when fighting multiple at a time, or some of the more annoying enemies.  It's very easy to get blindsided by something off-screen, or not be able to actually use the dodge move to get out of the way.   Many hits will knock you on the ground for a few seconds, leaving you unable to do anything.  Yes, the games around that time loved to make you ragdoll for some reason. 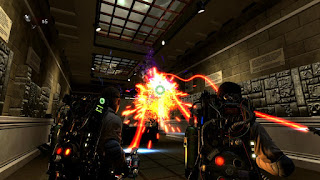 Another thing that was super popular to do in games around that time was not give a health bar.  Part of the "hud-less" craze, you won't know your exact health in Ghostbusters.  There's a tiny meter on the side of your proton pack, coupled with the growing red border of the screen, to give you a general idea of how you are doing.   It's not the biggest help, considering how quickly you can get downed, even on the "normal" setting.   Plus, the AI goes down even quicker, and isn't the best at helping you up. It's easy to get a "game over", sending you back to the nearest checkpoint.  That isn't the worst punishment for losing, but there could definitely be better placed checkpoints.

As is customary in video games then and nowadays, you can upgrade the different functions of your loadout.  It's not too involved, as each function only has 2-4 different upgrades, and each of those only has 1 upgrade.   For example, some attack types can be upgraded to reduce the heat gain from using it, or increase the damage.  The trap even has a few upgrades to it.   To get the money for upgrades, you simply need to advance through the game, and trap ghosts.  You should get enough to fully upgrade by the end, so there's no grinding.

While the gameplay is a mix of fun with some aggravation, the story is solid.  Written as a psuedo-replacement for the third movie, it actually fits the bill.  There's even reasons to have iconic locations and characters return, just so fans can experience them.  Re-hashing encounters with Stay Puft and the Grey Lady (librarian ghost) wouldn't do in a theater setting, but should put a smile on the face of long-time fans.  To top it off, the original cast is back to voice their own lines.  It's not necessarily the best voice acting ever, but it's good and authentic.  Characters talk and act like themselves, mostly because they are themselves.  Although some of the chatter is repeated too much, especially when you aren't the fastest at an objective, there is plenty of humor in the writing.

Overall thoughts on the game?  Mostly positive.  The core "zap 'em, cap'em & trap 'em" gameplay is fun and satisfying, even if several fights are not.   Dialogue and story scenes are the highlight, being written and performed by the iconic Ghostbusters themselves.   Multiplayer is absent, but will likely not be missed by many, even if it does eventually get patched in.  This game is worth playing for Ghostbusters fans.  If you already played the original release, I'd only recommend coming back if you really enjoyed it.  Otherwise, there's nothing new to entice you.


The Good:
Story, characters, and strapping on the pack to bust some ghosts with the original cast.

The Bad:
Get downed too quickly, annoying to fight too many enemies at once.

(Review code for Ghostbusters was received from the publisher.)
Posted by The SAHD Gamer at 10:17:00 PM