When I first started playing Space Hulk: Deathwing - Enhanced Edition, I was excited.  I've been a fan of Warhammer 40k for years now, and always hope that an amazing game capable of capturing that universe comes along.  While the real time strategy ones are very good and accurate, I know there’s a great action or RPG game just waiting to be made (preferably featuring the wonderful Eldar).

The game starts off with the tutorial, even if you already did it from the main menu (like me).  Afterwards, you are put into the space hulk with your mission.  The scenery looks really nice, and appropriate.   It's also pretty dark.  I didn't find any enemies for the first few minutes, so I figured the game was going for a more atmospheric approach, rather than an action oriented one.  This could work, since you are in heavy Terminator armor.  You are big and bulky, so going for the scare factor would play off the resistance and fire power you should have.

Once closer to the first major objective, there was a group of enemies that ran in.  Since it was from a more enclosed location, they were fairly easily dispatched.  So, maybe they weren’t going with a fewer-but-scarier enemy layout, but instead some small waves of them.   I pressed on, and reached the first objective.  It was time for my third assessment.

There were a lot of enemies.  Not like Left 4 Dead horde amounts, but a steady stream.  I stayed with my two squadmates, fighting them off.  I figured there would be an end to them, and I could move on.  There wasn't.  They just kept coming.  Eventually, I realized this, and had to run back to the beginning area of the level, with occasional stops to shoot a few foes in my way.  I eventually got toward the end, and received a brief reprieve.

Then, I had to defend my position.  I figured it wouldn’t be too bad, since I’m on easy, and my squadmates are fairly helpful.  I was wrong.  After a few minutes of valiant fighting, I went down.  It was a bit of a shock, since I’m not terrible at FPS games.   I’m not great, but should be able to beat the first level of one on the easy setting.  So, I reloaded and tried again.  This time, I hit up the warp portal to fully heal everyone, and tried again.

Another failure.  I slightly revise my strategy and tried again.  Yet another failure.  Revise, die, repeat.  I started to question myself, my abilities, reality, and the existentialism of the universe.  I eventually hid in a nearby tube with my squad, which limited where the enemies could come from.  I lost one member (thanks suicide exploder enemies!), but managed to get through.  Great, only several more levels to go. 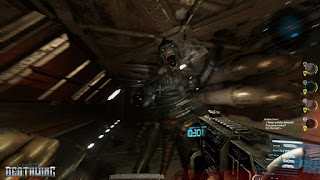 Besides the story mode, there are Special Missions and Multiplayer.  Sadly, these both just recycle the story mode maps.  Special Missions are just playing the same maps with random objectives each time you load in.  It’s not the most interesting idea, but it gives you some decent replayability.  Multiplayer is either a story mode or special mission map that you play with other people.  It’s more enjoyable than playing with the AI, and probably a lot more fun with actual friends.  I really would have preferred some kind of horde mode too, as I really like those, and it would fit with the theme.  The game still has the same problems, but with four people, it’s a little easier.  Plus, when not in story mode, you can pick your class.

Since you are stuck as a terminator, the class selection isn’t near as varied as it could be for a 40K game.  Each class gets a melee weapon on one hand, while the other has a ranged or another melee weapon.  There are only so many weapons, so there is plenty of overlap between the classes.  Skills, on the other hand, are unique.  Once you find the skills you like (if you can navigate through the terrible menus to actually see what they are), you stand a decent chance of also finding weapons you like on that class.  Killing enemies and completing objectives will give your multiplayer classes experience.  When you level up, you get a random unlock and some in-game currency to buy upgrades and skins.  Pretty basic stuff.

Death in Space Hulk feels off.  Your final hit just kind of kills you.  I rarely saw where it came from, you just…fall over.  It's very lackluster and made me feel like I wasn't even hit, but that my guy just gave up.   It also likes to happen very suddenly.  I’ve been killed in one hit by some enemies, and even died immediately upon loading into a map.  If you fail a map, you get some experience, but don’t seem to get any currency.  With how much you money you need to unlock stuff, the game somehow makes a long grind even longer and more grind-y.  Plus, you have to sit through several long load times, making it even worse.

It would be easier to not die if the visuals were tweaked.  Scenery, while detailed and appropriate, shares the pallet with the enemies.  It is much harder than it should be to pick up the off-white and grey enemies from the grey and dark grey backgrounds.  To make matters worse, your HUD and weapon effects take up a ton of screen real estate.  The information on the HUD can be useful, but it could also be presented in a better way.  Plus, sometimes your character will put his shoulder up into the frame which blocks more of the screen than anyone should be okay with.  The flamer and plasma cannons are useful weapons, but also disguise what is going on behind their fancy effects.   Is the enemy dead?  Should I stop shooting?  Are they more enemies behind them?  Having all of these things interfere with your sense of sight is not good design.

Choosing a class and playing with other people is a better experience than single player, which sadly, isn’t really saying much.  I was looking forward to playing Space Hulk: Deathwing - Enhanced Edition, but was left feeling disappointed.  Muddled visuals, repeating stages, cheesy enemies, cumbersome menus, and long load times really bring the game down.  Looks like I'm not the only one to bring shame to my chapter.

The Good:
Player models look really good.  Classes are a nice touch, and you can always have a varied experience in the special missions.

The Bad:
It's way too hard to see anything, since it is very dark, there are lots of effects everywhere, and the enemies are the same colors as the scenery.  Back in my day, Tyrannids were blue and purple!

The SaHD:
How does the power fist not kill the genestealers in 1 hit?  It's a strength of 8!  If it hits them, they die.  Have they not played 40K or read the codex?

(Review code for Space Hulk: Deathwing -EE was received from the publisher)
Posted by The SAHD Gamer at 10:19:00 PM