If you have read some of my other reviews, you will probably know that I really enjoy visual novel games.  That definitely includes otome games.  The back drop of Collar X Malice is pretty interesting.  After a high profile kidnapping and murder, a terrorist group known as 'Adonis' seeks to punish criminals and make people lose faith in a police force that isn't as sterling as they claim.  The series of murders is a countdown to X Day.  And what X Day brings, no one yet knows.

I really enjoyed the story of the game.  You play as rookie cop Ichika Hoshino (you can of course change her first name, but I left it).  After a rude awakening into the events of the X Day countdown, you team up with a group of guys to help solve the murders, and maybe save the city.  As you go through the game, you make choices which will affect story flow and which route you go on.  I was very surprised to get a bad ending very early.  Also, you get onto each route very early.  Since there were very few choices beforehand, I'm not really sure what determined my first route (it wasn't the one I was going to try for first).  When I went through a second time, I had a slightly better idea, but still not sure what got to that point.

At first I didn't like that the route was chosen so early, but it gives the protagonist and the romantic option time to bond and develop them as characters.  Most otome games seem to have a mostly unified story, and then branch off near the end.  I really like that Collar X Malice doesn't.  It really lets the characters and relationships develop more naturally.  There are different incidents to dive into, and the ones that Ichika is involved in change depending on the route taken.  That's a really good incentive to multiple playthroughs. 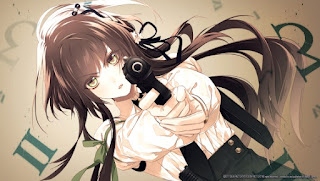 Another thing that the game does that I didn't expect is shifting perspectives.  To better flesh out the story, or to give the player some other tidbits, there are times the narrative shifts to another character.  On one hand, I like stuff like this in stories, as it is for the benefit of the reader.  On the other, it can feel a bit out of place, since otome games usually just follow the protagonist around the whole time.  There's also a select few times you will poke around a crime scene picture to find info about an X Day incident.  It was nice, but there are very few of them.  Lastly, there are also a few shooting QTEs in the game.  It's a nice little addition, but again are used very rarely.  I don't think they needed more, though.

Admittedly, one route through the game felt longer than average for visual novels, but it was probably still around 8-10 hours.  There were many times I was going to play for a bit, but got caught up in the story and ended up spending 3 hours playing before forcing myself to stop.  As mentioned before, having different crimes for different routes makes me want to play through them all even more.  So I'd say replay value for the game is very good, as each route had a lot of differences.

I very much enjoyed Collar X Malice.  It's an easy recommendation for visual novel and otome fans, and a great addition to the Vita library.


The Good:
I liked the story, and there is really good replay value in the different routes.

The Bad:
I have little idea how I got onto the routes I did get.

The SaHD:
Wow, two of the romantic options are just mean to you.

(Review code for Collar X Malice was provided by the publisher)
Posted by The SAHD Gamer at 11:55:00 AM