At the start of Yonder, you survive a shipwreck and wake up on a mysterious island.  After meeting some friendly locals, you then set about helping clear the island of the murk that is slowly taking over.  To do so, the Cloud Catcher must be repaired.

Despite how the game might sound, there is no fighting whatsoever in Yonder.  It's just nice, peaceful, and fun.  You go around the different biomes, collecting materials, items, and solving quests.  To gather from various places, you need the appropriate tool, which you just switch to with the L/R Buttons.  Gathered materials are sometimes used for quests, but mostly for crafting and trading.

The island is pretty big, but not as big as it looks.  This is actually good because you will be running around it a lot.  There are a few teleport places, but some are only active at certain times of day, and others have to be unlocked.  Until then, you will be hoofing it.  Also, some of the teleport points aren't in the most convenient locations, or even that close to what you need.  Admittedly, having a ridiculously good teleport system would kind of ruin parts of the game, but for the first half of the game, I really would have liked a better fast travel method.

Crafting is not quite what I thought it would be like.  Since you can get a lot of materials, I figured you would use a lot of them to make stuff.  In reality, you will use some, but most crafting materials are things you have to trade for.  You don't buy and sell, but instead trade what you have (all items have a value) for other things.  Different places offer different stuff, and some items will have a discount or markup.  Unfortunately, you will be doing a lot of trading to be able to do crafting, so you will have to learn how best to exploit the system.  I ignored it for several hours, until I figured out my flour/wood strategy to get started, and then I was only held back by places not having enough materials that I needed to trade for.

You also unlock several farms as you play the game.  On these plots of land, you can place material conversion machines (butter churner, etc.), planters to grow stuff, and animal shelters.  To actually adopt an animal, you have to give it food it likes, then lead it back to the pen.  It's a little painful, but thankfully you don't have to do it often.  There are really useful things you can do on your farms, but it's a section of the game I ignored for many hours.  Partially because crafting the items you need is very expensive, and partly because it took way too long before I actually got items from my first animals.  I think that second part was a glitch, though.  Once I was near the end and finally sat down and did a ton of crafting and trading, I realized just how useful the farm is, and that I should have tried to get it all together much earlier.  Now if only it wasn't so expensive to hire a helper... 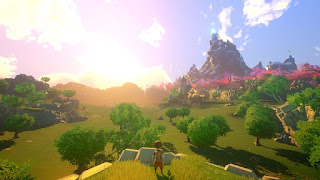 The expensive crafting and the sometimes awkward jump physics near walls aren't my biggest gripes with the game.  That is saved for the inventory.  It strangely doesn't sort very well, and there is no button to press to sort it for you.  Yes, you can filter, but it's also a pain to cycle through the filters, instead of being able to pick one.  Auto sorting would be a much, much nicer option, and I really wish it were there.  It makes crafting more of a chore, since you will have to really look through all of your stuff.  Plus, it can be hard to know how many stacks you have of something, since they won't be next to each other.

If you so choose, you can focus on just the main story quests.  I'm not that kind of guy, so I spent a lot of time wandering around, trying to find everything.  I don't know how long it took me to go through most of it (I haven't finished every quest), but I'd estimate around 20-25 hours.  You could do it much quicker if you focus, but it would take you longer if you decide to 100% the game and get all of the trophies.

Yonder: The Cloud Catcher Chronicles is a fun adventure game.  I really like exploring in games like this, so it really hit the spot for me.  Sadly, some people will be turned off because there isn't any fighting and/or a lot of collecting, but it's a great game to relax and play.  Most times I wanted to just keep running around and find more stuff, or complete one more quest.  It's definitely worth the money, and a definite recommendation for adventure fans.

[UPDATE]
As I go to post the review, there was apparently a patch drop earlier today.  One thing addressed is the limited number of basic trade goods needed for recipes, plus a way to craft them.  A second is giving a tree and plant growing place when you first get a farm...definitely useful.  I haven't tested it out yet, but these will definitely improve the experience.


The Good:
Super relaxing adventure game where you run around and collect stuff.

The Bad:
Inventory really needs a sort option.  Sometimes it can take awhile to get all the crafting stuff you need.

(Review code for Yonder was provided by the publisher)
Posted by The SAHD Gamer at 12:13:00 PM