As a fan of most Idea Factory and Compile Heart games, I was eager to try out Dark Rose Valkyrie.  It sets you in a world where a virus is turning people into monsters called Chimera, and you head up a special group tasked with fighting them and keeping citizens safe.

The game started off pretty strange, by offering me the three difficulty levels of easy, hard, and very hard.  So...no normal?  The one difficulty level you should have is not present?  Well, against my better judgment I went with hard.  For the most part, it worked out pretty well except for some boss and mini-boss fights.  It just involves more grinding.  After about 30 hours I put it down to easy.  You get more experience after fights, but quest rewards are reduced.

Grinding does actually take time, since the game sports day/night and moon phase cycles.  As you spend time in the world map, it will slowly move from day to night, and back to day again.  After each day, the moon shifts forward one phase.  While you are in a dungeon, time will pass, but it will not be reflected as long as you are inside.  Once you leave, it will jump to where it is supposed to be.  This is helpful for the times when you need to fight a monster that is only around a certain time of the cycle.  However, enemies are stronger at night.  Unfortunately, the first time you do a dungeon, it will always be night.  Seems a bit steep to me.

Thankfully you won't waste time walking back to a dungeon, because there is a very helpful warp feature.  There are a few warp points scattered around each dungeon and the world map, and you can fairly easily warp among them from a warp point or a save point.  Sadly, you can't warp to a save point, which would have been nice.  Especially since they don't always have great placement for the warp and save points.  You can work with them, but they aren't in the most convenient locations. 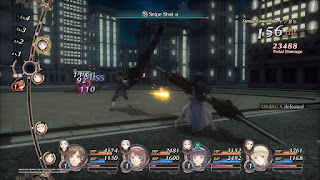 Combat is some good old fashioned turn based goodness.  On the left side of the screen is a long bar with icons for everyone in the battle.  Your icon moves up (based on your speed stat) and you can take action at an appropriate time.  If you have played any of the Grandia games, you will quickly realize the basics.  When your turn comes up, you can attack, charge attack, use a skill, or even switch to your back up character.  The attacks have three different levels that you set the combo for, and each higher one is stronger, but takes more time before you do it.  For whatever reason, I stuck mostly with the level 2 combo for 90% of my attacks.  While hitting an enemy, their icon is stalled, which makes fighting one target easier than a group.

The charge attack will knock an enemy's icon back a bit.  I rarely used this, since the benefit is about equal to stalling them while you do a normal combo, but you get higher damage doing that.  Skills are things I mostly used on boss and mini-boss fights, at least in the early stages to knock down the extra targets.  There are plenty of elemental attacks in there to take advantage of enemy weaknesses, but no way to change your attack type (strike, slash, pierce).  There are healing skills, but they felt very weak versus the damage strong monsters could do.  Not good.  It was better to use them between fights and instead rely on expensive items for battle.

Since it is a Compile Heart game, enemies have guard gauges.  If you deplete it before their icon starts over at the bottom, you get some extra damage, plus your EX attack at the end of your normal combos.  You also build up TP while attacking, which you can use to defend from an enemy's special attack (SUPER useful) or unleash a powerful sync attack.  Using it for defense felt necessary for the boss fights (especially on hard), but using it for attack was more fun and flashy.  After you execute an EX move, the person behind you may rush in to get in a few more hits.  Afterwords, you can choose to spend 1 TP for a total (all enemies) or single (the target) sync attack.  The entire backrow will appear an unload their shots on the foes.  It's fun, and useful to rack up the hit count for extra damage and reward and the end of the fight.  Problem is, they don't always seem to activate when you actually need them, and instead are available many times when weak targets are already dead.

Lastly, your characters can use TP to activate a power-up for a few turns.  Called Ignition, it boosts your stats and protects from status ailments.  Honestly, I rarely ended up using it, which may explain why some boss battles are hard.  In my defense, I needed the TP to block (so I don't have to use the weak heals), and therefore didn't really have it to spend otherwise.  Also, the stat boost didn't seem that great, but I always appreciate abnormal status protection. 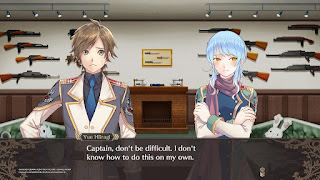 When not fighting or exploring, you will be spending your time at the ACID base.  Here you can make new items, sell items, rest, and accept quests.  They don't call it "sell items", so it took me a bit to realize that was what turning them in was.  The last section of items to turn in will give money and also components that you need for powering up your weapon and making pieces of equipment, so make sure to sell some of those when you get the chance.  You can also talk to party members for extra events, which will affect their relationship with you (and the ending).

The game follows a fairly simple path: event(s) in base, go to dungeon, return, event(s), do missions, return, rinse, repeat.  A lot more of the missions are required than I thought.  Even so, I was stubborn about doing all of them, even those not required, before moving on.  I didn't really run low on days to turn them in, either.  To mix things up, interrogations have also been included.  You see, not everyone is who they appear to be.  One of the group is a traitor, and you (Asahi) have to figure out who it is.  To do that, you will question characters about themselves and the others at a few points in the game.  These were...ok...but I found it odd you could only ask so many questions.  Yeah, it's probably to make it harder, but it feels a bit too limiting and hard to put it all together in a satisfactory way.

Even though I enjoyed Dark Rose Valkyrie and its high-hitting combo battles, there are a lot of little things that bug me.  Money is really hard to come by early on, story dungeons force it to be nighttime, and boss battles are aggravating on the hard setting (sometimes on easy, too).  It should take well over 40 hours to complete the game, especially if you try to do all the side quests like me.  Still, I'd say it's worth trying out for JRPG fans, even if you were put of by some of Idea Factory's non-Neptunia offerings.

5/28/18: PC Release Update
I recently got a code for the PC release on Steam.  While most PC releases of games I have already reviewed run well, Dark Rose Valkyrie broke the streak.  The story and dialog scenes ran perfectly fine.  Battles and moving around the map were choppy messes.  It looked like it was running at 10 fps.  I'm not a stickler for graphics, but it should not look like a failing flip-book animation.  Audio seemed to skip at times.  Battles aren't hampered by the choppiness, but they look bad.  On the map, the bad frame rate makes getting those first strikes all but impossible.

At first I thought maybe running on higher settings, or on a hot day, made it run so poorly.  I turned the settings down to low (which seems crazy for my i9, but I digress), and ran the game on other, cooler nights.  There was a slight improvement, but not one that actually helped.  I'm not sure what happened to this PC release, or if there is something amiss on my machine, but it ran poorly.  If you can, stick to the PS4 release.


The Good:
Fun combat in a completely stand alone game.

The Bad:
Lots of little nitpicks, like the high damage you take and the low amount of healing, among others.

The SaHD:
Another Asahi?!

(Review code for Dark Rose Valkyrie was provided by the publisher)