Having played a few hours of a previous Cladun, I was eager to try out Cladun Returns: This is Sengoku.  Leveling up, maxing stats with magic circles, and even throwing in some Sengoku era characters sounded like a fun time.  For awhile, it was.

On its surface, Cladun Returns resembles a mystery dungeon game.  While there are random dungeons in the game, the story mode isn't, but is instead an RPG.  They are all pre-made, each is only 1 floor, and can be run through pretty quickly.  There are locked doors that require either switches or killing certain enemies to open.  The last stage of each area also has a boss monster to defeat.  After completing each chapter, you also open up the EX stages that have Sengoku heroes to recruit.

Combat is not turn-based, but in real time, giving some action to this RPG.  You can freely move around the areas, attack monsters, and try to avoid getting hit.  You can also run (which halves your defense), defend (which ups your defense...a little), and even slide (because reasons).  There are several different weapon types, which are a bit different than each other.  Knives are fast but have little range, swords hit a wider arc but take a split second to attack, spears have good range but won't hit right in front of you, staves shoot out magic but take time to recharge, so on and so forth.  It's worth it to try them all out and see which works best for you (I prefer swords and knives).

You also get combat skills, many of which are dependent on the weapon you have equipped.  You have to actually go and equip the skills, which I didn't know.  I did wonder why I didn't have access to my healing skill, which would have been useful early on.  Unfortunately, the skills take a lot of SP to use, so you really need to save them.  Getting more SP and HP is not too hard, because of Cladun's signature Magic Circles.

Each class will unlock different Magic Circles as they level up.  The character at the center is called the lord, and other characters placed on the circles are vassals.  The HP of the vassals is added to the lord's effectively making the vassals the lord's shield.  The vassals' SP is used to equip various artifacts to the circle, which will increase stats.  Losing a vassal in combat will lose the stats they gave until you return to town.  Learning to use and then master the Magic Circles is the key to understanding and defeating the game.  There are also other ways to increase stats, such as the castle walls and, of course, equipment.  It's a cool system that will likely require many hours to fully take advantage of. 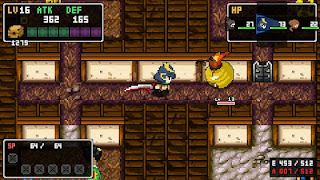 For the first 5 chapters, I had no real difficulties going through the story stages.  I eventually found that my created samurai was better at fighting than my initial character (who could heal), so I started using him as a lord.  Once I got to chapter 6, I got slaughtered.  I figured it was maybe because I angered the ice ogre enemy and suffered his cheap attack, so I didn't do that the next time.  Still got slaughtered.  It was puzzling to be sure, since I had little difficulty up to this point.  I did a few more quests, and a few more EX stages and tried again.  No dice.  I saved up and turned in a quest to get a good set of armor, and then I did much better.  I'm fine with needing to upgrade stuff, but it's not as simple to see what is actually better.  Plus it's a bit ridiculous to be totally fine one minute, then destroyed the next.

At various points in the game, you will encounter invincible or mostly invincible enemies.  These are highly annoying because they can trap you.  I've had several times where you end up down a narrow hallway, just to have one of those killjoys come in behind you, leaving you stuck.  Your only options are to sit there and die, or quit out.  Both are dumb, and avoidable if more thought was put into the game.  It really soured the experience for me.  Enemies will also chase you for near the entire map it seems, and they have several cheap attacks.  The aforementioned ice ogres have a snowball shower that tracks you everywhere else in the stage, even if they can't see you.  Super accurate/tracking shots when the enemy has no idea where you are is a pet peeve of mine in games.  Just don't do it.

However, if you can put up with poor designs like that, there are 10 story chapters and 10 EX chapters.  Plus, there are randomly generated and much longer dungeons like the Ran-geon.  You can also spend a ton of time leveling everyone up and min/maxing your stats.  That last part I would really like, if not for the other stuff.  I really liked the game for the first few hours, but some of the questionable designs put me off of it quickly when encountered.


The Good:
Lots of good customization and stat growth.

The Bad:
Getting slammed with a difficulty wall out of nowhere, cheap enemies.

The SaHD:
I really liked recruiting the Sengoku people, since I've seen them in several other games.

(Review code for Cladun Returns was provided by the publisher)
Posted by The SAHD Gamer at 10:30:00 AM