After abruptly losing her dog, a little girl goes home and her sister goes to look for it.  As it gets darker, the little girl ventures out to find her sister.  However, you will soon learn that scary monster lurk around every corner.  It is up to you to guide the girl to safety and locate her sister in one of the Vita's scariest and creepiest offering, Yomawari: Night Alone.

At first glance, the game looks like a horror game, and it that is fairly accurate.  You play as a little girl, who has no weapons against the evil shadows that roam the town.  Therefore, it is a lot like a survival horror game.  You quickly get a flashlight that can show you where most monsters are, and you have to either avoid them, run away from them, or sneak by.  It took me way too long to realize the right stick can aim the flashlight.  It's really useful, but I do find myself swinging it around from side to side like a paranoid horror movie extra.  And just like them, if the girl gets caught, she gets killed.

There are places around town for you to hide.  While hiding, you can only see the girl, and vague red mist that represents the enemies.  There's also a heartbeat that lets you know how close they are.  It really keeps the adrenaline pumping while you are hiding.  Overall, the game has a great presentation that is unsettling and creepy without being graphic (see Corpse Party if that's what you want).

While on your quest to find your sister, you have various places that you can go to that change during the course of the game.  Some place may not be open when you first wander by it, but you will eventually need to go there.  Along the way, you have some basic puzzles to figure out, like finding items that let you pass areas or unlock doors.  So in addition to dodging various ghosts and monsters, you also need to solve how to get to where you need to go. 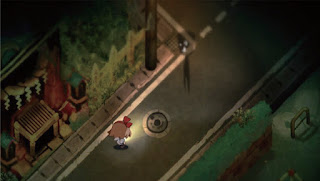 The girl can also pic up rocks, coins and fish crackers.  Rocks can distract monsters, fish crackers feed cats, but coins have the best use.  Whenever you go by a Jizo statue, you can offer a coin to make a quick save.  They also act as teleporters, that can move you quickly from one statue to another.  The girl can also return to her house from the map, if you want to full save.  Then, stop by the nearest statue and jump right back in to whatever you were just doing (porting around doesn't cost a coin).  I'm one of those people that saves a lot (Psycho Mantis told me I like to kick my tires before I leave), so this is a very useful function.

It's pretty easy to pass by some of the side stuff in the game if you focus on the story, but you are allowed to go back at the end of the game and other points to get the extra items.  Yomawari is a pretty fun and creepy game that offers a few hours of playtime.  It's part survival horror and part puzzle, and while you will die easily and repeatedly, it's not that frustrating.  Well, unless you can't figure out where to go and what to do.  It's a solid offering on the PS Vita for horror fans, or even puzzle gamers.


The Good:
Great at setting the tone for the game early on.  A very creepy game.

The Bad:
Not always clear where to go/what to do.  Sometimes you can actually go past things that it appears to steer you away from.

The SaHD:
While I'm not a fan of limited saves, like ink ribbons, paying coins to Jizo was a cute and appropriate way to do it, so I can't be too mad.

(Review code for Yomawari: Night Alone was provided by the publisher)
Posted by The SAHD Gamer at 3:45:00 PM