My first foray into the Destroy All Humans! franchise was with its final game, Path of the Furon, on the Xbox 360.  I was interested in the series before that, but for one reason or another didn't try it out.  So, I jumped on the chance to review the first game when it was released on PS4.  Admittedly, I thought it was one of the popular remasters that are plag-, uh, I mean, ever present in our current gaming scene.  However, it is one of the PS2 games being released on PS4, meaning it only really has upscaled graphics and trophies.  It's also widescreen, except for the cinematics.

It was quickly apparent just how much the game was from the PS2 era.  The controls felt a bit off for some of the functions.  For example, R1 is shoot, which is definitely an old school Playstation thing.  The one that got me the most, even after several hours, is that going back from a menu isn't the ever useful Circle button.  For whatever reason, it is the Triangle button.  There's also fall damage, and you may know that I don't really like that, especially in a game where they give you a jetpack.  I've been able to avoid it for the most part, but there are still times I fall just a bit too far, even if it doesn't feel like it, and take some damage.

When I say "damage", I don't really mean health damage.  Crypto has regenerating shields, but doesn't seem to be able to take a hit past that.  You don't get hit too often, but the damage when you do seems high.  I'll pretty much chalk all of these things up as signs of the time.  I don't really expect them to be changed in a non-remastered remastered release, but it is something to be aware of.  It is a good way to remind people what games where like, even 10 years ago.

Crypto gets several weapons in his fight against humanity.  First is his gun, which can shoot a steady stream of energy.  This shocks the target, and can jump to others nearby as well.  It does get upgrades that allow it to change into a disintegration ray and fire explosive shots, among others.  Most shots have limited ammo, but the basic blaster has a recharging energy meter.

Besides his gun, Crypto has some mental powers at his disposal.  He can levitate things with his mind, and even read the thoughts of others.  He can assume the disguise of any one walking around, which helps keep the alert meter down.  Too bad you can't pick up anything while in disguise.  To top it all off, Crypto can climb into his saucer and lay waste to enemy vehicles and buildings.  Yes, it is fun, but the energy of the death ray drains a little too fast for my tastes.  Thinking back to Path of the Furon, I think most of these minor complaints were ironed out and made more fun by then. 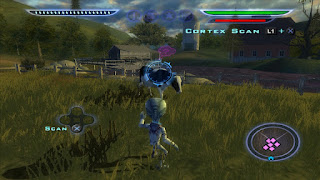 The game is mission based.  When you enter the area of your next mission, it starts automatically.  When you finish, the game saves and you get your reward.  You are allowed to roam around the surrounding area, but you have to beam back up to your ship to get the next mission.  It's a very strange design decision.  If you don't want to take the next mission, you can always stay down in the area, or return to a previous area for side missions and collectibles.  Too bad there aren't any in-game maps to help you.  Plus, the side mission markers don't disappear, or change appearance in any way to signify that you have completed them.  It's not a deal breaker, but it's really annoying to try and remember which side missions you have done when there is no real way to keep track in the game.

The game takes about 10 hours to do all the missions, and a few more if you do the side missions and collectibles.  It's not overly tough, but there are definitely some harder missions that may cause you to go back to the spaceship and try again.  No mid-mission checkpoints here!  You will also get shot a lot when running around to grab the collectibles, since there is no stealthy way to get them.  Again, not a huge deal, but it does get annoying after a few minutes of getting attacked from the constantly respawning enemies while you are just trying to track down the last few probes.  However, you can use the cheat codes to your hearts content (and I'd even recommend it for a few missions) without disabling trophies.  Take that modern gaming!

Overall, Destroy All Humans! was pretty fun, but it definitely shows its age.  The shooting and mental powers gameplay is solid, and I really enjoy the humor of the game.  The mission structure could be better, and I would have liked a few improvements to the game to make it an actual remaster instead of just an upscaled re-release.  If you have not played the franchise and want a jumping in point, this is a good place to start.


The Good:
Funny game with a good premise.  Killing enemies with the disintegration ray is cool.

The Bad:
Having to go back to the ship to take the next mission, and no checkpoints in longer, multi-part missions.

The SaHD:
I've heard the sequel was the best of the series, so I hope that's next to get re-released.

(Review code for Destroy All Humans! was provided by the publisher)
Posted by The SAHD Gamer at 2:10:00 PM