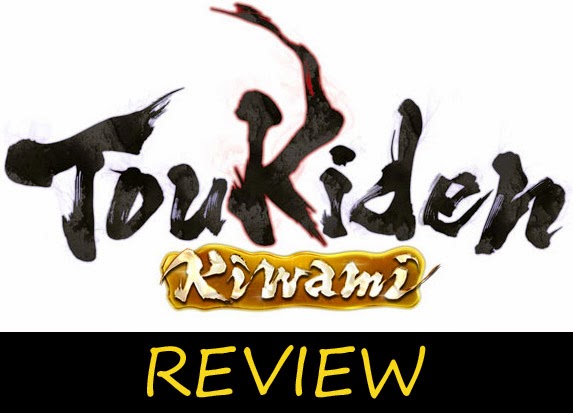 The original Toukiden caught me by surprise.  It was very fun, and I ended up playing it for many hours after I had finished my review.  It has strong influences from the Monster Hunter series, but does a lot of new things that make it stand well enough on its own.  I was excited that the expanded game, Kiwami, was headed to the US and EU so I could play it some more.  I got even more excited when I saw it was not only continuing to be on the Vita, but coming to the PS4 as well!  While the portability is very handy for the multiplayer monster hunting genre, playing it on a console is something I prefer, so I opted for the PS4 version.  It is certainly the prettier of the two choices, but I wouldn't say it's the best looking PS4 game.  Good enough, though!

If you are new to the series, I'll fill you in on the basic gist and combat (if you are versed, feel free to skip ahead to the next paragraph).  You play as a slayer and are tasked with defending your village from giant Oni that try to break though your barrier and, well, kill everyone.  So most missions are focused on you and a group of up to three other slayers taking down big bosses.  Square, triangle and circle all do different attacks while X is your dodge.  You can also equip up to three mitama to one of your weapons that give you different skills and passive abilities.  In the fights with these giant monsters, you can sever or destroy various parts of them, which will give you more rewards at quest completion.  Parts are used to make new weapons and armor, so expect to fight monsters a few times to upgrade your equipment.  It might sound like a lot to take it, but it is basically you and up to three others (AI or online) taking down big bosses and making armor and weapons out of them.

Toukiden: Kiwami adds three new weapon types - a rifle, naginata and a giant club - to the six already present.  I'll start with the club.  I didn't like it.  It wasn't bad, but wasn't for me.  It reminds me of the great sword from Monster Hunter: big, slow and you do more damage when you hit enemies with the end of it.  However, it does have a nice reward in Toukiden for doing so.  Hit with the tip a few times, and you get a damage boost.

The next new weapon is the naginata.  It is fast, like the dual knives, but hits a wider area.  If you get enough unscathed hits, you will increase the damage area.  If that wasn't enough, it also has a move that puts you in the air for air combos.  As a dual knife user, I am totally going to work some naginata use into my character.  I really like it.  I didn't think I would, since there is already a spear in the game, but I was wrong.  It also has a parry move, but I doubt I'll use it.

The last weapon addition is the rifle.  Each has three kinds of ammo that you choose what order to load into it.  It aims really well, and even shows weak points on the monsters that cause extra damage if shot.  The rifle is a fun weapon, and will probably compete with naginata for my secondary weapon.  It can be a bit cumbersome at first, and reload can feel a bit slow, but they had to even the weapon out somehow.  Honestly, I don't think I'd use the rifle if I were on the Vita version, but it feels really good on the Dualshock 4.

Besides the new weapons, there are of course new missions, more story chapters and new monsters.  With the new monsters comes new weapons and armor to create from each one.  The new story chapters fits well enough into the original story, as they are set after the closing events of that title.  Probably my favorite new addition is sending the other hunters on a sub-mission.  Whenever you head out, you can choose one unused slayer to do another mission in any previous chapter.  For example, if you are doing a mission in chapter 5, you can send another into chapter 4 or below.  This is a good way to get more monster parts without grinding so much, since you can continue on in the story but still get parts from a certain monster.  I used it to finally get the Cthonian cloaks that I needed for a quest, but couldn't get to drop in the 20 or so times I did the mission in the vanilla game.  Plus, it doesn't seem to cost anything to send them out, so why not use it?

There was also a small but awesome change to the Mitama.  They can now be leveled up to 12 instead of 10.  That's not the great part, though.  They now have a forth skill when they reach maximum level, and you can freely replace the other three skills then, too.  Before, you had to replace one with another, but there was no efficient way to reclaim skills you overwrote.  The only choice you had was to set the mitama at level 1 again and raise it back up.  In Kiwami, there is no need to do so, as you can just max it out and set which three you want that it learned.  They even added a new mitama type that excels at destroying parts.  Nice!

If you played the original version, the save file from the Vita will transfer over as long as you download the update for it.  That let me keep all my stuff that I earned over 80+ hours and start on the new content.  You can also keep your stuff but start the story over again.  Either way, it is expected and awesome that you can port over your save.  If you play far enough in the demo, that can transfer over too.  Both bring bonuses, which is a great incentive to continue... as if saving all that time wasn't incentive enough.

I played a few matches of the multiplayer, and they felt smooth.  I wasn't using any form of microphone, but we didn't have any troubles taking down the monster.  In fact, it was a lot faster than with the AI companions.  If you don't want to or can't connect to the internet to play with others, you can just use the story companions and do them anyway.  Even late at night I found several lobbies to join, but I don't know how long that will last.  As always, if you have friends to play with you, that is the best choice.  Now, I just need to convince my friends to get the game, which shouldn't be hard because the game is really fun.

As a fan of the "vanilla" Toukiden, I of course like the expansion.  If you liked the original, I would recommend Toukiden: Kiwami if you want more.  If you skipped the original release but were interested in it, I'd again recommend it for the sheer amount of content you will get.  I'd also recommend it if you want to try to get into the monster hunting genre, since Toukiden is fast paced and more forgiving than other entries, without being easy.  If you are on the fence, at least try the demo, since you can carry the save over to the full version.  Fans of hunting games, action games and Koei games should definitely check it out!
Posted by The SAHD Gamer at 5:39:00 PM