Omega Quintet is Idea Factory International's first PS4 outing.  It takes place in a world where a phenomenon called Blair is turning creatures into monsters called MAD.  The only people that can stop the Blair and MAD are super powerful magical singing idols called Verse Maidens.  Yes, really.  It's a zany premise, I know, but I like that it's so silly and unique.

The story mostly follows the character you play as, named Takt and his childhood friend Otoha.  Otoha has grown up and idolized the idol Mamoka, who has single-handedly been keeping the city safe for years.  How many years?  Well, she looks 17, so.... more than that.  The characters start off as tropes, but they are actually pretty entertaining.  I frequently found the dialogue funny as the characters would banter with each other, make fun of Mamoka's age, or Takt complaining about how he doesn't want to do the job that is thrust on him.  While I'm sure a lot of people won't like it, I enjoyed the dialogue, and would look forward to watching all the skits around the base whenever a new chapter rolled around.  The game is in both English and Japanese, so you can hear it in whichever language makes you more comfortable.

The format of the story was also interesting.  It's set up like a TV show, so each chapter begins with the game's opening video and even closing credits that are show scenes from that chapter.  The story in each chapter was fairly concise while definitely being part of the bigger narrative, and would sometimes even end with a cliffhanger or some other mysterious scene that is very prevalent in anime shows.  Although, this lead to most chapters following the formula of plot -> quests -> plot -> chapter end, repeat.  Not the most unique flow to a game, but I still like the episodic nature of the story.

This might be IFI's first PS4 game, but moving in the field seems very familiar.  Just like its previous siblings of HD Neptunia and Fairy Fencer F, you run and jump around in areas that have enemies sprinkled throughout.  These areas are bigger than either of those games, but the enemy count remains similar.  The bigger areas have stretches that are devoid of opposition, but the smaller ones have them practically on top of each other.  The areas themselves aren't bad, with decent scenery representing the ruins of the life that used to be.  You can also attack enemies before they contact you to gain an advantage in battle.  The attack is a strange sparkle that the leader throws out, but it doesn't fly as far as I would think.  There's nothing wrong with the field movement, but it isn't unique, especially if you have played other Idea Factory games.

Battles, though, do have their share of unique features.  Each weapon and skill has a different effective range that slightly affects its damage and accuracy.  Energy skills (magic) and Mic skills (weapon-based attack skills) take SP, same as most other games.  There is also a voltage meter thrown in that gives some bonuses, but I mostly used it for each girl's super move.  Skills add a certain amount of wait time, and the more turns you take the longer it takes for your next turn.  You can also assign Takt, the manager, to a girl and he can shield them or do additional attacks when they strike.  While he can only do that so many times each battle, the only time I would run out is some of the boss fights, so just use him whenever you can during normal encounters.

There are also special chain attacks that are activated by using certain skills with the different girls in succession.  You have to activate Harmonics to do them, though.  There's also Live Concert, where a song will play in the background and people request certain actions, which gives you bonus experience at the end of the fight.  While it can seem daunting with all the different factors to consider, you can still just keep hitting enemies until they die.  I usually went with "use circle targeting moves to hit as many foes as possible, then finish them with normal attacks" approach.  I appreciate the more complicated stuff, but I'm glad I don't need to pay much attention to it until I understand it all. 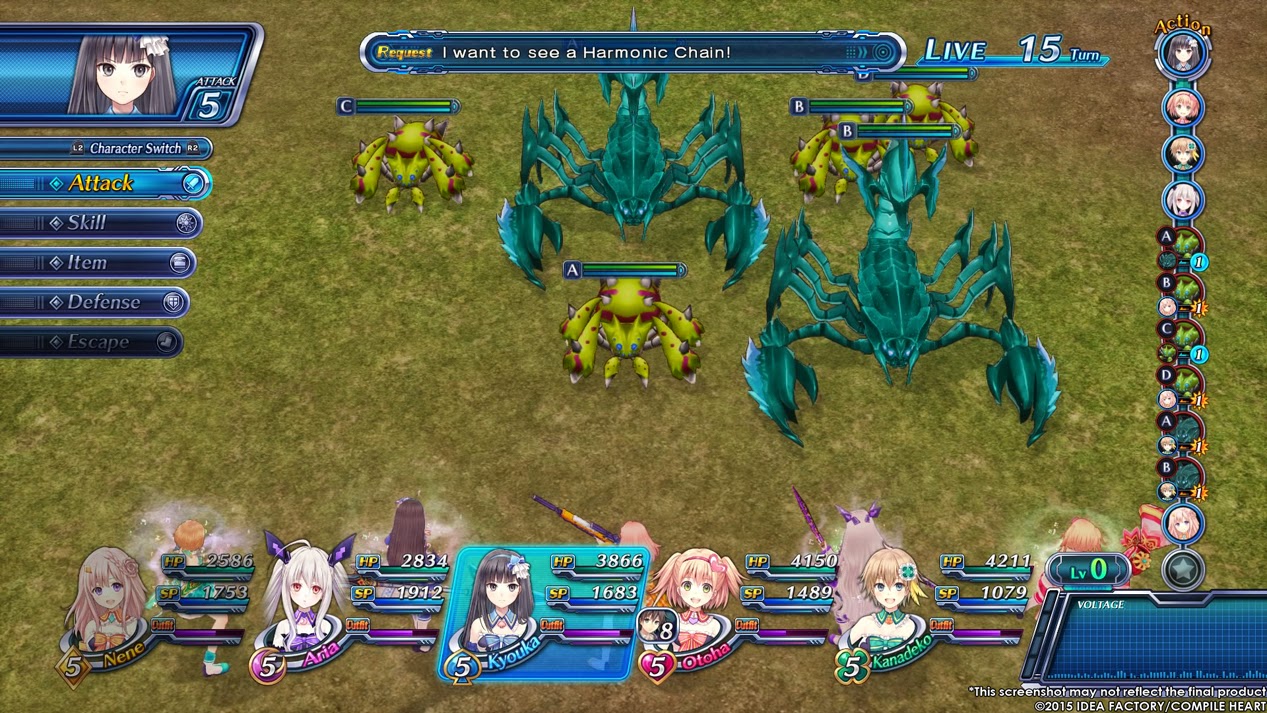 Strangely, for all the tutorials the game shoves at you, I didn't see one that mentioned the skill upgrades.  It's a giant disk that has lots of nodes on it, each representing the spells and skills in the game, plus the passives and super moves of the individual girls.  Since each girl can equip any weapon, they can also learn all the skills for that weapon.  Each skill requires points, which are mostly gained from leveling up your proficiency with each weapon.  That would be fine but I don't think the game mentioned that important part.

The skill disc will also function better when you realize you can zoom in.  It starts out very small and it was hurting my eyes trying to see it all before I realized there was a zoom feature.  Oops.  Since they are all laid out in different configurations, it can be a chore to find any given skill in a timely fashion.  I wanted to work towards the super moves as soon as I could, and it was a pain to find each one.  Same thing with their passive abilities.  Thankfully if you find a skill node with a prerequisite, the required node is highlighted.  That made it slightly easier to find ones I needed, but sadly it's still too cluttered.  The skills themselves are fine, just navigating each character's disk is more time consuming than it really should be.

There are a few more features to the game.  Besides the main quests, there are plenty of side quests to complete.  They aren't all obtained from the computer in the base, which again, was strangely not mentioned in one of the many tutorials.  I feel like I missed at least one, but I won't know for sure until I go through the game a subsequent time.  Anyway, the ones obtained in town have a stricter time limit, and I even timed an early one out.  I'd be less salty about it, but the item I needed for it was obtained as a drop from the boss that advanced the plot and timed the side quest out.  Grumbling ensued.

To round out the features, there's also weapon and equipment crafting.  Weapons weren't necessary to craft early on, as you find them as well, but a lot of the other stuff has to be made.  To get some of the materials necessary, you have to break down enemy drops and other pieces of equipment, so it can be very costly to use the system.  Outfit pieces you make will show up on the character models.  You can also buy new hair styles and colors with special coins you earn in the game, so you can tailor the look of each girl.  Granted, you can also change their underwear, but it didn't come across as creepy as it sounds.

One last thing I should probably mention are the little concert performances you can do.  There are thankfully preset ones, because you can edit a lot of the specific things that go on, such as camera angles, positioning, dance moves, effects and even which girls sing what line.  It's pretty daunting, and this is coming from someone that loves doing similar things in the WWE games for my entrance.  It's not quite my thing here, but if you are interested in it, there is plenty of stuff with the concerts.

While it is still a niche game that won't appeal to everyone, I like Omega Quintet.  The battles were fun and I enjoyed the characters interacting with each other.  The game might be a little formulaic with its progression, but I liked that each chapter was framed like an episode of a TV show.  There's also not as much fan service as you might suspect, although it was present for a few scenes.  I liked the game and I'm looking forward to going back to play it some more.
Posted by The SAHD Gamer at 11:37:00 PM