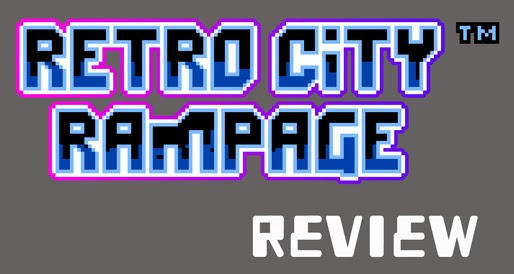 Retro City Rampage DX was recently released on the 3DS e-shop, so I revisited this throwback to NES era goodness to see how this newest version held up to the others.  For the most part, the DX is the same as the other versions.  The graphics are still 8-bit and awesome and the soundtrack is still retro and well done.  They did add some new screen filters, which is great because I really liked those in the Xbox 360 and PS3 versions.

Mostly, I'll talk about the changes and how this version stacks up to the others.  If you are interested in more of the game systems, story and things, start with my reviews of the PS3/Vita and Xbox 360 versions.

First up, the lower screen now houses a mini map.  This is very, very useful.  Previously, I would frequently pause to make sure I was taking the right roads while getting to my destinations.  This new function makes it easier to get around the map, even if I frequently crash while looking at it (thankfully I don't do that in real life).  Another awesome use of the bottom screen is weapon selection.  Tapping the weapon will bring up the list of available weapons so you can quickly switch to the one you want.

Second, the arcade challenges have been reworked to be more "concise".  Basically, the time limit was cut in half and the scores changed accordingly.  This change is ok, it doesn't really make them easier but makes it easier to replay them.  I still found several challenges hard, but at least my failures took less of my time.  Plus, there were also a few tweaks to some of the missions, to make them a little more streamlined, and the arcade games were also reworked.

A third change is to the shooting.  Now you can jump while shooting, effectively skipping part of the animation.  This is essential for saving your health.  Before, you had to wait a bit after shooting before you could jump, but not anymore.  Unfortunately, because of the lack of a second analog stick, shooting must be done with the lock-on (Y Button).  I always found this inferior to the second stick, as it makes the game harder.  Sadly, there is no support for the Circle Pad Pro accessory, but I wouldn't be able to use one even if there was (since I don't have one).

The last major change was to the game's camera.  While driving, it will shift toward the direction you are going so you can see more of the screen.  Since the DS screen is smaller than consoles or the Vita, this is very helpful so you don't crash.  I didn't have any problems with the view while playing the game on the 3DS, so this change was good, even if not immediately obvious.

The mini map and weapon selection on the bottom screen is very useful and a great advantage this version has over its predecessors.  However, the easy way to shoot is now gone, making the 3DS version harder and more frustrating.  Overall, is the game still good?  Yes.  Is it better than the previous ones?  Not really.  I'd recommend Retro City Rampage DX if you don't have access to the other systems.  As much as I like the game, I feel the console versions are better, or the Vita version if you want to take the game on the go.
Posted by The SAHD Gamer at 1:00:00 PM