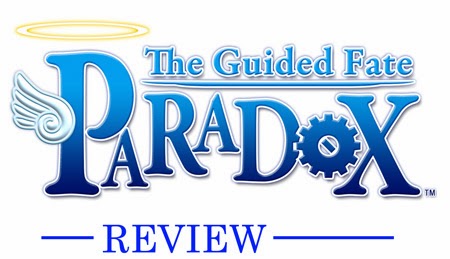 Renya is a very unlucky man.  As The Guided Fate Paradox opens, he explains to us that he has never won any kind of contest or random drawing in his life.  So when he wins a local lottery that makes him God, it seems as though his luck is changing.  Or maybe playing God is not as lucky as it would seem...

The Guided Fate Paradox is a mystery dungeon style game where players must guide Renya and his angelic sidekick through wishes he must grant.  I like the premise of the game, even if it would be hard to fully describe to someone who hasn't played it.  Basically, you must go into a machine and battle through random dungeon layouts and fight a boss, all to get stronger and grant someone's wish.  The story is broken up into several wishes that are filtered through a machine and then hand-picked by the angels who serve Renya.  I actually think most of the plots were pretty good, as what was going on wasn't immediately apparent.  However, going through a dungeon the first time took a lot longer than it felt like it needed to, thanks to the numerous cut scenes.  They weren't bad, but really broke up the flow of playing, since you would get a lengthy scene for every new floor.  After going through a dungeon once for the story, I was amazed at how much faster the subsequent trips were.

If you don't know what a mystery dungeon style game is, don't worry.  The term refers to a game where dungeons have a set number of floors, but the layout of it all is random.  Rooms are uncovered on the map when you enter them, but the hallways connecting them always have a "fog of war" effect, limiting your visual distance.  I appreciate that they actually point this out and give a reason for it in the dialogue, which is part of the humor of the game.  Anyway, enemy, item and exit locations are also random.  I've gone through a dungeon several times and found new pieces of equipment that I hadn't seen yet.  So while it is fun to wander into a different experience each time, the randomness of each trip can be very good or very bad.

However, my favorite thing about the dungeons is that each one has a different gimmick to keep things fresh.  The first is pretty standard, easing the player into the style of game, but they quickly change.  There's one that has you jumping down to different levels and using a cannon to go back up.  Another is a sea floor, where there are no defined hallways, so you have to wander around to find the "rooms" on each floor.  My favorite is the level where each floor is a cube that you walk across, and walking off the edge rotates it accordingly.  It's a really fun one, plus the floors themselves are pretty short and you can make your way through it pretty quickly.

Movement through each floor is done one turn at a time, which equates to one action.  Enemies only move when you do.  If you take a step, the enemy will too.  If you attack an enemy, the enemy will also do their own action.  You have no time limit between actions, so you can take your time and plan what to do.  Special moves are dependent on what your equipment is, and takes a certain amount of SP to execute.  HP and SP are filled automatically as you walk around, and moving around drains energy.  If you run out of energy, you will start to lose health.  You can restore energy with different food items, and health with healing items if you need it restored quickly.  These kinds of limits are not as bad as they seem, since you usually find enough food, or the dungeon is over before it is an issue.  Some of the long bonus dungeons will be a lot harder unless you come prepared.

The boss fights are more like puzzles than a straight up fight.  You still have to fight, but there are tricks for how and when you can damage them.  They aren't too hard, although I did have problems with one that tasked you with protecting a knight while fighting off hordes of demons by firing cannons at them and knocking down ladders they were climbing.  Even so, the boss fights are interesting, since they also add something new each dungeon to spice things up.

Items in The Guided Fate Paradox have durability, but not in the way you are used to.  The item gauge fills up, not down, and when it reaches the top, the item will "burst".  While I loathe durability, I like this system because you can make weapons and armor stronger after they have burst.  Taking it to the blacksmith and paying some money will raise the stats of the item.  Also, later in the game burst equipment can be combined to make stronger pieces of equipment.  However, that isn't the best part of items bursting.

When the item bursts, it will give you a tile that can raise the stats of your characters.  The tile will be one of the four stat types -strength, defense, speed or accuracy- and must be placed on a character's Divinogram to be effective.  "What is the Divinogram?" you might ask.  Think of it as a game board that you place the pieces on.  The tiles will increase your stats, and you can also place Holy Symbols on top of those.  Most Holy Symbols will negate what is beneath them, but increase the effectiveness of equipment, raise ailment resistance, increase carry capacity and more.  Plus, there are special statues that deliver "god energy" to these Holy Symbols and strengthen them.  The more tiles the energy stream travels over, the better the effect.  A combination of direction changing symbols (that don't negate what is below them) and a winding path will lead to large boosts to your symbols and in the end, your characters.  Acquiring, placing and routing all of the tiles and paths is my favorite part of the game.  It took me a bit to realize this, but once I made winding paths over as many tiles as possible, my equipment got a lot better and it was easier to move through the dungeons.

Whenever you leave a dungeon, your character's levels are reset to 1.  While this isn't the most fun, any levels you gain while in a dungeon are added to your Total Lv count, which in turn makes you stronger.  Add to this the Divinogram modifications, and your character will steadily get stronger, even if it doesn't feel like it.  Plus, the equipment you keep will give you advantages for any further excursions.  So get as many levels as you can in each dungeon, and keep bursting your equipment.

As in most mystery dungeon games, dying is to be expected, and the punishment harsh.  When you run out of HP, you are kicked out of the machine, and lose any and all items you had equipped and in your inventory.  Yeah, it sucks when that happens, and I'm not ashamed to admit I reset the game once or twice instead of losing some good equipment.  Half of your money is also gone, so store what you can in the bank once available.  You will still add to your Total Lv, so you don't quite lose everything, but it can be a small consolation to a frustrating situation.  Especially since sometimes the death feels out of your hands.  Always carry an Exit item (which you don't have access to until you've died once in a dungeon...thanks, Lilliel), and use it if things look bleak.  Pushing your luck is a great way to lose your good stuff.  Yes, the stuff is replaceable, but losing an item you burst several times is not fun.

There are 10 chapters in the game, and it can take awhile to make your way through one.  While this is mostly because of the cut scenes, you might have to do some grinding if you aren't feeling very lucky making your way granting every wish.  It does keep track of how many times you have gone through the game, but most of the end game content doesn't require you to beat the game multiple times.  Besides the main dungeons, you also have access to a few dungeons that go much farther down than 15 floors, and may offer you fights against some characters that fans of NIS games will recognize.  The trophies are fairly spaced out as well, with some for doing something the first time, a few through the story, and the last few for beating the guest bosses and obtaining all of the items.  Getting all of them will take quite some time, but you can make your way through just the story in about 20-30 hours.

The Guided Fate Paradox has a decent story (even if it frequently interrupts your dungeon diving) with a few lighthearted parts to poke fun at some of the tropes of the mystery dungeon genre.  Dying is expected but still ultimately frustrating, but powering up your stats with the Divinogram and bursting equipment is really fun.  It's a fun game that has different gimmicks to the dungeons and bosses to keep it interesting while you make your way through the dungeons and pick up all sorts of crazy equipment.
Posted by The SAHD Gamer at 12:20:00 AM