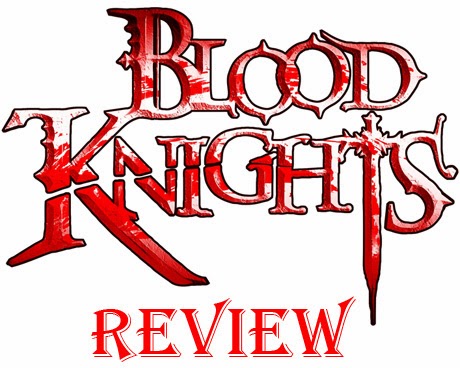 Blood Knights is a downloadable hack and slash fantasy game out now for the Xbox 360 and PC and coming soon the the PS3.  It stars a soldier captain named Jeremy who is bound to a vampire named Alysa on a quest to find the Blood Seal so humans can win the war against the vampires.  After being left for dead, Jeremy takes his bound blood sucker along and attempts to fulfill his mission.

There are two characters you can control in the game.  Jeremy is a dual-wielding close range fighter.  One ability is a very strong attack, useful on a strong minion or to get a weak one out of the way quickly.  The other is an area clearing whirlwind attack, great for damaging groups or giving yourself some space.  All abilities are on a cooldown, so you can use them frequently.  The character switch is also on a cooldown, so you can't swap, use an ability, then switch back immediately.  The second character is Alysa, who has two crossbows and fights enemies from a distance.  She can throw grenades to damage groups of enemies and has a very useful fire arrow attack that, besides being very damaging, can ignite explosive barrels.

The controls take a bit to get used to.  Jumping is done with the A Button and Y is used to switch.  Late in the game, the B Button activates a blood shield, but I didn't end up using it.  The Left Bumper is the first special ability (power attack and fire arrow), while Right Trigger is the second (whirlwind and grenade).  Left Trigger is the blood suck move, from which you can push (Alysa) or pull (Jeremey) the enemy.  Jeremy attacks with the X Button and can dodge with the right stick and Alysa aims with the right stick, but shoots with Right Bumper.  In the beginning, I would try to shoot with Right Trigger instead of the Bumper, so I lost a fair amount of grenades before setting myself straight.  As I said before, it took me a bit to be comfortable with the controls.

Overall, Alysa was much more useful a character, as her range and mobility made the game fairly easy (I was playing on Normal).  Jeremy could dish out some good damage, and the dodge was helpful, but it is very easy to get hit.  It doesn't take much damage to do you in for good, but there are plenty of places to fill up your health between fights, plus you can drain a bit from most of the enemies.  Most foes you face aren't very hard, even the bosses.  The most trouble I had with a fight was against the first golem you fight, but that was only because I didn't realize you have to use the vampire pull to defeat them after their health is gone.

Blood Knights is a linear game.  After completing a dungeon, you move on to the next and cannot revisit the previous area.  You can revisit the town to buy and sell things, but you won't be able to go back and get treasure chests or Blood Coins you may have missed.  You wouldn't need to go back to fight enemies or anything like that, but being able to snag the missing coins would be nice.  That said, the game does move in a logical fashion, so the player knows why they are going from point A to point B, and the story is pretty easy to follow.  The story is not bad, but the voice acting...is about what you would expect.  Graphic-wise, I actually thought the game looked pretty good.  The scenery detail was nice, and the weapons and armor you get are shown on your character.  It's not the best, but I actually liked it.

After getting enough kills, you will level up, and can choose one skill from a list to upgrade.  Well, most of the skills can be upgraded anyway, as a few don't have any upgrades.  The game tells you what each upgrade does before you buy it.  There are some really useful ones, like the attack and movement speed increase for Alysa, and some that are less useful, like reducing the cost of things from the store.  Life, attack strength and luck can be increased for every five Blood Coins you find.  There are several pieces of equipment to put on, and both characters each have two weapons.  You will find most of the equipment in treasure chests scattered and hidden in the levels, but you can also buy things from the vendors.  Most of the good stuff will come from the chests, so you shouldn't need to buy much of any items, really.

One run though all 7 chapters of the story took me just under 6 hours.  There's really only two achievements for going through the story, and the rest are missable.  You get some of the achievements for killing guys certain ways, collecting all of the Blood Coins, and making three "human" or "vampire" decisions.  As there are only really three choices in the game, this is easily missable!  My favorite one is to throw ten enemies off of ledges with the vampire push ability.  I'm always a fan of throwing guys off into the abyss.  If you wanted all of the achievements, you would have to go through most of the game at least twice (to make choices for both sides) and play some of the co-op, effectively making it 8-10 hours total.

So how is the co-op?  Battle wise, the game is fine in co-op, but not as easy as single player, since someone will have to be Jeremy.  The platforming is a lot harder, since you have to use your vampire push and pull abilities to traverse the levels.  Playing through the game once on single player made it harder, since I was used to being able to jump all of the gaps and hills, and the game wasn't very clear that I had to use the push and pull to travel what I could easily by myself.  Well, if it did tell me, then it was easily missed, since my wife and I fell to our deaths a time or two before figuring out what we needed to do.  You'll want to be well coordinated if you intend to go through the whole game with a partner.  You'll also end up accidentally grabbing the wrong target with the blood suck a lot, if what I played was any indication.  It wasn't horrible, but I'd recommend sticking with single player.

Blood Knights is a bit on the short side, but it follows a logical course.  The progression feels very natural, however, it would be nice to be able to return to areas for us completionists that missed a coin or two.  The controls take some getting used to, but the game is fairly fun, even if it got stuck loading the game a few times.  I'd go with the single player experience unless you have a partner that you can be very coordinated with.
Posted by The SAHD Gamer at 7:47:00 PM