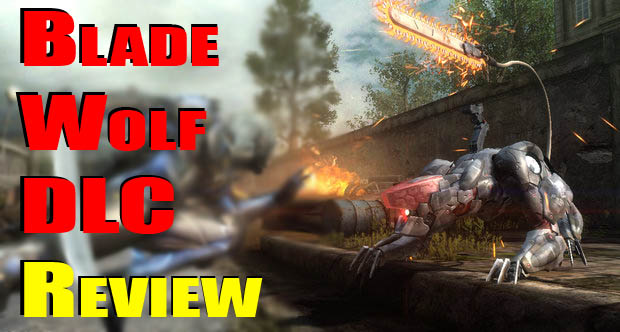 The next piece of downloadable content for Metal Gear Rising, called Blade Wolf, has been released on the PSN and XBL Marketplace.  It retails for $6.99 (or equivalent in Microsoft Points) and has players using the dreaded boss from the base game, Blade Wolf.

Despite being four-legged, Blade Wolf controls just as well as Raiden and Sam.  He (it?) can jump, dash, dodge and parry.  It has been a bit since I last played MGR, so parrying took time to work off the rust.  I didn't get much practice since I was favoring stealth kills to open combat.  The quick attack uses the claws, while the strong attack has Blade Wolf grabbing the chainsaw on his back and using that.  It's pretty much the attacks he uses to destroy you in the base game.  If you do the full combo with the chainsaw, he will even say "combination attack" and "combination complete".  Nice touch!  If you use the strong attack while dashing, he will do the spiral dash.  A jumping strong attack is a very powerful and useful spinning saw-like attack.  Overall, some nice moves to cut up your enemies.

The scariest part of the story was seeing other blade wolves running around.  They are not boss fights, so they aren't very hard.  They can still do tons of damage to you though.  Blade Wolf is pretty mobile, so it wasn't too hard to run around and dodge attacks from the enemies I did fight.  Also, I only really ran into the dreaded camera issues on the final boss fight, which was a relief.  That was the hardest fight in the story, and did take me a try or two before I won the fight (at first I had forgotten to equip the rations).  It did feel as though Blade Wolfs Zandatsu didn't reach as far as Raiden or Sam.  I'm not sure if that's true or I was just crazy.

Most parts of the story can be completed without ever entering combat.  Like the main game of MGR, you have the option of straight up fighting all the enemies, or stalking around and stealth killing them.  This is my favorite part of the DLC.  I love sneaking around and stealth killing guys, and did so at every opportunity.  It was something I really missed in the last DLC (Jetstream Sam), and was very happy to do it again.  Playing it this way made the whole thing much easier and less frustrating, so I was able to have lots of fun.  I learned my lesson with the last DLC and set this one to easy, but I didn't need to.  Being able to sneak around and kill enemies instantly negates much of the difficulty in fighting them.  On a second go around, I set it to normal and so far haven't had any trouble spots.

The Blade Wolf scenario is pretty short, as my final time clocked in at just over 1 hour and 15 minutes.  This doesn't count cut scenes or retries.  Except for the VR missions, I only had to retry once.  Given that I prefer to use stealth and my final finishing time, I am strongly considering trying to beat it on Revengeance difficulty in under an hour.  I feel it's possible for me to do it, which is not something I say very often.  I don't like playing on the hardest difficulty or speed runs, but I want to do it for Blade Wolf, which is surprising.  I could easily knock down my time since I won't need to search for things.  The only real difficult part would be the final boss fight.

Just like Jetstream Sam, the VR Missions can only be done when they are found in the story mode.  I prefer the main story where they are just unlocked and can be done later.  When you access one, it will reset the checkpoint, so any enemies you killed will be back.  At least in this DLC, I could do some of these VR Missions.  All the ones I ran across in Jetstream Sam were combat related.  Thankfully, the Blade Wolf ones have stealth and platforming ones.  These are much better for me, personally.  The first sneaking one I ran across was infested with targets to avoid, but was still doable.  The combat ones seemed harder, mostly because Blade Wolf takes a lot of damage from attacks.

While it was pretty short, Blade Wolf was really fun.  It was less frustrating than Jetstream Sam due to the ability to sneak around (or kill) most of the enemies.  If you are a completionist or willing to go through multiple times, it will probably be worth the money to you.  If you weren't a fan of sneaking around and assassinating enemies, you might get less out of it, but it should still be fun.
Posted by The SAHD Gamer at 12:47:00 PM