Hyperdimension Neptunia Victory has recently been released and continues the adventures of the CPUs as they try to save Gameindustri (again).  For the uninitiated, the CPUs represent the first party video game systems, past and present.  Many of the enemies, places and predicaments in the game are parodies of video games and the industry itself.  The plots are often silly, with lots of fan service and nods to other games.

There are slight improvements to the graphics this time.  Of course I like the look of the characters in this game, and their in-game models are better than Neptunia Mk2.  The cut scene graphics have more movement to them, but not much.  The dungeons looks better than the last game, with more detail in the scenery.  Some of the dungeons do get repeated, though with slight differences.  There are lots of new enemies, too, and some returning ones as well.

Another improvement over its predecessor is the UI and town.  It's not really important, but the towns look better to me.  The UI also seems easier to navigate, as I could figure out where to go to do what I wanted.  Finding the challenge list (more on that later) took me the longest, and even that wasn't more than a few seconds.  Setting combos and assigning party position is easy and intuitive.

Speaking of combos, there are a few changes to the battle system.  Yes, you still move around on a small field and position your attack, same as the last game.  Enemy attacks also seem to have a huge range again.  While standing still, holding L1 or R1 will slowly rotate you, making it easier to aim your attack box and hit multiple people.  I don't remember this in the previous game, and it is very useful when aiming your attacks to hit multiple targets.

Anyway, back to combos.  You have three different attack types, Rush (for multiple hits), Power (does more damage) and Break (does more guard damage).  Up to three attacks of each type can be set.  After your initial attack, you have up to three more attacks you can combo into.  It sounds much more complicated than it is.  As you level up, you will earn new attacks, and can set up the combos however you like.  Setting each attack requires a certain amount of CP, so you can't just set all the best attacks.  However, you could set less of one type to have more CP for the type you prefer.  I really like this setup, so you can choose which attacks you want depending on the situation.  For example, use only Break attacks to break the enemy's guard, then use Power attacks when they will take more damage from them.  It's fun to make your own combos, and makes combat pretty fluid.  You also aren't locked into using just one type, so you can avoid using an attack if the enemy is resistant to it (ex: initial attack -> Rush -> Rush -> Power).  There's also SP moves that use your SP gauge (similar to MP in other games).

You might think that sounds like the last game, and it does.  So to mix it up, they have now added an EXE meter that fills as you land attacks.  When a section fills up and it gains a level, you can do special EX finishers at the end of your combo.  Using an EX finisher will not deplete the gauge, so you just get extra damage, which is great on the bosses and fierce monsters.  An EXE Drive, on the other hand, will take a protion of the EX Drive Gauge for a super powerful attack.  This gauge resets when you leave a dungeon, which is why it's good that enemies will respawn while you are there.  Later in the game, you get team EX Drives, which can be activated when you have certain characters paired up or in the battle together (and the appropriate Lily Rank).  These take more EXE gauge levels, but are even more powerful than the single character ones.  So it matters what characters are in battle and paired with each other if you want to have access to more special attacks.  And if you are like me, you will want to see each special attack at least once.


As previously mentioned, enemies will now respawn throughout the dungeon while you are present (they didn't in the last game).  In a lot of ways this is helpful, so it is easier to grind experience, certain enemies and items.  Of course, this can be troublesome when you are barely making your way through the dungeon and trying to run for the exit.  If you have one, an Eject Button can help, but it's actually not that hard to just avoid the enemies and make your way out.  So while there is a little inconvenience at enemies respawning, it's actually really helpful.

There are now challenges for each character to accomplish.  It's the same list for each character, and several require you to be the party leader.  They are fun to do (for me), but more importantly, they will increase your stats or unlock bonus voices.  The stat gains are small at first, but as you unlock each subsequent level of the challenge, the gains increase (and they are cumulative).  You get a lot of them by just playing the game (hit or miss with attacks, kill monsters, take damage, receive healing, etc.), so those don't require any effort other than having the character in your active party.  The challenges that require you to be the party leader will require some effort (or lack thereof), since you will jump a lot, run around, get preemptive strikes, and more.  There's even one for standing around in a dungeon.  It took me a bit to train myself not to pause so I could work towards this whenever I needed to go to the bathroom/ deal with a child/ eat food/ etc.  The challenges can take awhile for the highest level (especially standing around for so long with every character) if you want them all.  The added stats help, but they aren't necessary if you don't want to get them.

A new Scout system has been added too.  You can send out little avatars (people that reside in the towns) to check out the various dungeons.  They can find items, money, change what monsters appear, change experience/item drop/money drop rates, or find hidden places.  It costs money to send them out, but it is very worth it.  You need them to change the monsters to complete some of the quests, so use them as much as you can.  At the end of each chapter, Scout usage is also one of the things they grade you on, so keep sending them out.  Most dungeons now contain flags that you can break or stand.  This affects what the scouts can find or change about it.  It's worth using them as much as possible to get the most out of the game.

The story is silly, and frequently breaks the fourth wall, but I enjoyed it.  After getting yelled at for being lazy, Neptune goes out on a quest and ends up being sucking into the past of an alternate dimension.  Basically, she was transported to a time when Lowee was the only real console, and Lastation was just about to form. She meets a new Planeptune CPU named Plutia, and together with the other CPUs, must defeat the growing threat of the Seven Sages.  Don't go in expecting a serious piece about the troubles of mankind or the existential reasons for suffering.  If you enjoy parodies, just relax and enjoy all the oddball scenarios and jokes about video games.  A good chunk of the lines are voiced, but not as many as I would think (I played in English).  The voice acting is pretty good, though.  My favorite parts are mini-Histoire's emoticons when she's talking.  It's a little thing, but it really sets her apart from her other version and the other characters.  The music is also decent, with the Seven Sage's theme being my favorite since it sounds a little goofy. 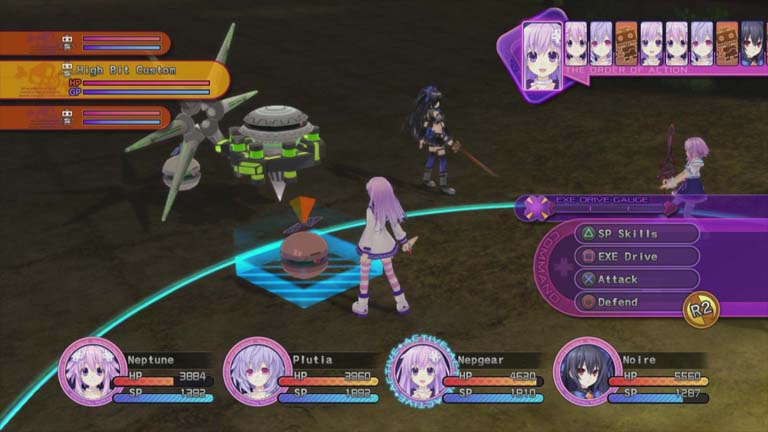 While the story is fun, there can be lulls between segments.  Most times, advancing the story is gated behind the various quests obtained from the guild.  The game does tell you that some quests must be completed to advance the main story, and you will have to do the non-repeatable ones to move the plot forward.  This makes the main story seem aimless at times, since you have to do what could be considered side quests just to advance.  Most times you have to kill a powerful monster, so it might just be a way of making sure your level is high enough to complete the next portion of the story.  This can be good, since the bosses get pretty tough.  They take a lot of damage to kill and they can dish it out in spades.  It was kind of annoying to stop doing the story and figure out which quest to do so I can get the next event, or grind a bit to beat a boss.

Counting all of this, though, the main story can easily last over 35 hours.  It took me over 45, although there was a bit of that just spent sitting in dungeons (for the challenges of standing still, since it's better than pausing).  There's also three endings, but new game+ makes subsequent runs easier and shorter.  I'd say there is good bang for you buck here, as any RPG should have.  If you are after the trophies, the list is secret again (yuck), but they aren't very hard.  You get one for all the endings, so you will want to go through multiple times if you want that.  The longest trophy is maxing out each of the girls' Lily Ranks with each other, but there are some discs that make that faster.

Overall, I enjoyed Hyperdimesion Neptunia Victory.  As was the case in Neptunia Mk2, you probably don't want kids around for some of the scenes and dialog.  There is tons of fan service here, and a silly story.  The special moves are flashy and fun to watch.  It can be a bit aimless at times, and involve a bit too much grinding, but I ultimately enjoyed playing the game.
Posted by The SAHD Gamer at 9:51:00 AM