It's a Hard Lock Life

My friend recently picked up his WiiU preorder, and wanted to play Nintendo Land with him to try it out.  He at least updated the system so I didn't have to sit there for 5 hours while that happened.  On a side note, the "menu" screen looks like an absolute mess.  It's safe to say I'm not a fan of that.  Anyway, he popped in the disc and we...proceeded to sit there for another 20+ mins while that updated.

So we booted up the game and....sat there while the ever helpful "Monita" talked in small, slow sentences so we could understand her and told us all about Nintendo Land instead of letting us pick a game to play.  After that was done, my buddy wandered over to the Metroid mini-game so we could get started.  I figured he would start with the Legend of Zelda one, but I guess he wanted to be nice and try Metroid first.

We accidentally did the ship vs. people multiplayer, so after a round of that, we quit to do the co-op one.  After going through the controls again, we started it up.  While hard on my wrist (my friend puts his sensor bar in a terrible location), it was kinda fun.  After 3 rounds we decided to switch ship and ground so we could try the other.  Right as we went to start the round...the system hard locked on us.  Yeah, buzzing sound and all.  Ouch.  Since I'm sure something as basic as this was tested (despite only really promoting their friends there, yeah, still bitter), it must have been the system.

After unplugging the machine to get it to reboot, we again started Nintendo Land.  Again Monita came around to ensure we couldn't just play the game we wanted and explained about the train that would I guess take us around the 1 screen park.  I say "I guess" because I didn't really care and just wanted to skip her talking to me.  As I had the gamepad, I just started jumping while she was showing the train.

Can you guess what happened next?

Hard lock.  Again.  So...we assume the WiiU/ Monita doesn't want us to actually play the game and called it a night.  I think they obviously hired the wrong people.  My wife thinks they must have partnered with Bethesda.  Either way, not a good way to show off your new system, especially when it has barely been out a week.  Why did I want one of those again? 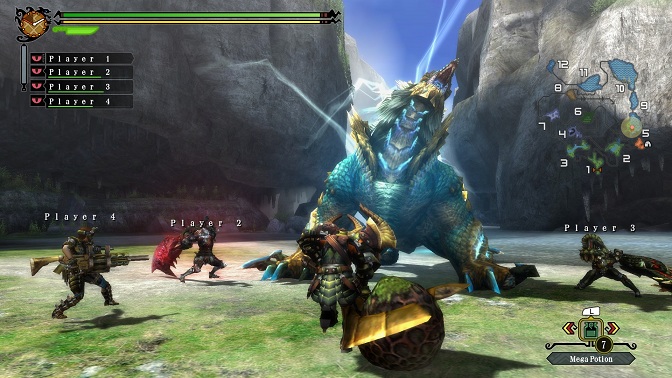 Email ThisBlogThis!Share to TwitterShare to FacebookShare to Pinterest
Labels: Monster Hunter, wii u