Seasons After Fall (Xbox One) Review

There’s never enough time in the day when you want to play a game but must parent, too.  Thankfully, there’s a bountiful market of indie games that appeal to someone looking for something quick and fun. In a world where artistic platforming indie games are a dime a dozen, Seasons After Fall has appeal if you’re looking for something short.  I was fortunate enough to get it on sale as part of a double pack, and decided it was time to give it a try.  It’s a pretty game, with a distinct art style, a clear plot, and easy play mechanics.  That’s what makes it a good choice for someone without a lot of time.
The first thing you’ll notice is the art style.  It looks like oil painting over hand-drawn scenery and characters.  It's nice.  Everything was uniformly presented, with nothing so obviously different that it took away from the main art style.  Nothing is more distracting when playing a game than a random object drawn in a different style.  The only complaint I can make about the game’s art is its tendency to place a plethora of objects in the foreground.  I don't like things obscuring my view of the character while I'm trying to control it, and they disrupt my immersion in the story.
The second thing that drew my attention was the story.  When starting out, you possess a small fox.  Urged on by a mysterious spirit, you set out to find the guardian of winter to gain its power and find out more about your purpose.  You jump around, but there are no complicated puzzles to solve until you earn the power of the first season, winter.  Of course, it doesn't take long before you get your second and further seasonal powers, and the game opens up.
I say "opens up", but the second half of the game is still rather linear.  In the first half, you are required to earn the four seasons, in order.  Once that is complete, you move on to the second half, where you then free the four respective stones, and rebuild their power altars.  The first stone, like the power, is winter.  After that, you are free to do the other stones, and then the altars, in whatever order you want.  Previous areas don’t change, but more sections of them are available as you gain new powers. This helps keep the game short.  There are a couple of new areas added, and one is a big pain in the butt. 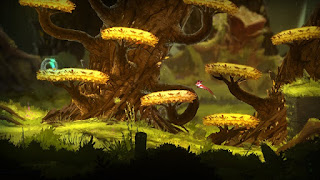 Lastly, let’s talk about gameplay.  The mechanics are simple, but you can apply them in multiple ways.  For example, winter freezes water, which allows you to walk on it.  Summer is dry, and thirsty plants drink up the water, lowering its level.  Then there are more unique applications.  Fall winds can blow leaves and fog, while spring rains can make plants grow and help raise water levels.  The seasons can also affect the few creatures you encounter, which helps you to solve puzzles.
Puzzles in the game are not overly complicated.  Until you get the second power, puzzles are either "use winter" or "turn off winter."  You may still get stuck, but every solution is close by, and rarely involves more than knowing what each season does.  Considering the limited list of effects, it shouldn’t be too difficult, even for casual gamers.  The platform jumping also isn’t very strenuous, which is a plus.  The simplicity makes for a relaxing experience for most of the game.
You might think this sounds involved, but the entire game is only a few hours long.  It can be stretched out if you don’t do the stone and altar objectives at the same time, or if you go back for the collectible flowers.  Doing so doesn't add much time, but it's pretty much all you have for replay.  There isn't much in the way of extra content.
Overall, Seasons After Fall was a decent gaming experience.  When all is said and done, it's a standard indie game: artistic visuals, average platforming, short length, and a dose of charm.  A fun game, but not outstanding.  There just isn’t anything about it that makes it something to go out of your way (or out of your budget) to buy.
The Good:
Artwork is pretty and changing the seasons for puzzles and platforming is fun.  Controls are simple and effective.
The Bad:
Artistic objects can interfere in platforming.  Elements of the seasons could be deeper.  Not a lot of extra content.
The SaHD:
Argh, no double jump!
(Seasons After Fall was purchased by the reviewer)
(Expertly edited by Handy Edits)
Posted by The SAHD Gamer at 9:44:00 PM