Back in 2003, I saw an ad for the soon-to-release Disgaea: Hour of Darkness.  Since I liked strategy RPGs, and anime art, I decided to buy it when it came out.  Once I played it, my mind was blown.  There was crazy stuff I hadn't seen before in an RPG.  Crazy characters, wild terrain effects, and insane stats.  The levels went to 4 digits!  It was eye-opening to see this stuff after max level 99 and max damage 9999 Final Fantasy games.  It quickly became my favorite game, and its success likely fueled other RPGs increasing their own level and damage caps.

This should have been an easy review to write.  This is a re-release of Disgaea.  The first one.  My number 1 favorite game of all time.  It dethroned Final Fantasy IV for heaven's sake, which was no small feat.  All I should have to do is gush about how much I loved the game.  However, nostalgia can be a cruel mistress.

Is it the updated visuals?  Nope, those look crisp.  With the exception of the graphics and sound, the game is a fairly faithful recreation of its original incarnation.  And therein lies the problem.

The subsequent game added new things, changed some, and fixed things for the better.  Well, most times.  Still, there were plenty of quality of life changes that just made the core experience better.  None of that is present here.  There's no cheat shop, so leveling up takes more time and more grinding.  Money is more of an issue in the early game, as is fully equipping your people.  You don't get experience from healing, so healers fall behind.  High rank weapon types aren't balanced.  Heck, monsters only have the one type of weapon, so "too bad" if they need INT.

The item world is of course present.  Every item contains a random dungeon that allows you to power it up as you descend.  Still a great idea.  Levels aren't as small as they became over the years, and Mr. Gency's exits aren't as easy to come by.  No innocent farm or storage.  I will give the game credit for at least removing the geo panel from the exit square.  Now there should not be any floors that are actually impossible.  Also, the support innocents, like Statistician, seem to be higher starting values.  I don't remember there being so many, especially in values over 5, at the early stages of the game.

Some aspects of the Dark Assembly feel dated, too.  Since the cheat shop (regretfully) wasn't added, you have to use the council to increase or decrease monster levels.  Bribery is a huge pain, since each senator is an individual, not part of a group.  The percent chance of success isn't shown before the vote.  If you want to increase your counter attacks, you'll need the Dark Assembly, since there is no Character World.  No more promotion to increase your class' rank, you have to reincarnate for that.  Mentor and student isn't something that can be switched to benefit people, it's completely set at creation.  Just listing the stuff that should have been added to the "complete" version is kind of depressing. 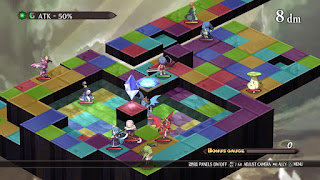 Now, as much as I want the improvements from future games to be crammed into Disgaea 1, making a formerly great game incredible, I can see reasons why they didn't.  Maybe they wanted a 1:1 copy of the original, just with crisper graphics.  If that was what happened, I would still complain, but understand.  For better or worse, that's not what happened.  Remember the treant golems in the first game?  They were there, but now they're not.  Several enemy types were replaced with later iterations, likely because HD sprites of them already existed.  So I guess they aren't even pretending to faithfully recreate it, just do what ever is cheap and fast, consumer be damned.

But, we get Asagi.  I mean, she's been in other games before, but now she's...here.  And a Prism Ranger!  That's actually cool.  Not totally unique, because there was apparently a way to get one in the PSP version.  Still, it's a shame that those two things are the only things that were added.  Maybe it's my fault.  Maybe I expected too much after how great the re-releases of all the other mainline games have been.  How they get upgrades from new system mechanics, benefiting the player.  However, part of the blame is also adding Complete to the title, which implies something comparable to the last release that carried it.  Adding one and a half new characters doesn't strike me as a "complete" sort of thing, just a tiny gesture.

There is a silver lining through all of these dark clouds.  For all the things that should have changed, there remains one thing that shouldn't.  The story.  Disgaea 1's story is still the best the series has to offer, and it is completely intact.  I still think Laharl is wonderful, Flonne is ditzy, and Etna sucks.  The story for this game is wonderful, and was one of the reasons I kept playing it, despite how painful it could be.

Disgaea 1 Complete should have been a slam dunk.  Take the original characters and story, add the improvements from the past 15 years, slap in some new characters and battles, and rake in the praise and profits.  Sadly, that isn't what happened.  What we did get was a lazy port that tries to keep to everything original, except the things that would require doing work.  Despite the Complete moniker, it's barely different from the current PC offering.  If you have never played the original Disgaea, then it might be worth it to play the amazing story.  Otherwise, leave your nostalgia in the past...having your face shoved in its faults is a painful experience for the soul.  It's not a bad game, but it's a huge missed opportunity.  Just play Disgaea 5 Complete instead.


The Good:
Uh...it looks much better than the PS2 version.  I don't think some random item world levels are impossible anymore.  The plot is still great.

The Bad:
Disappointingly lacks the quality of life improvements from the last 15 years that really should have been added to make this game utterly fantastic.  I'm pretty sure I brought that up at least once or twice.

The SaHD:
Well I had already preordered the special edition from NIS, so it should be very easy to keep it sealed.

(Review code for Disgaea 1 Complete was provided by the publisher)
Posted by The SAHD Gamer at 8:23:00 PM