The mainline Neptunia series is no stranger to updated re-releases, and Megadimension Neptunia VIIR (Vee-two-are) keeps it rolling.  Besides sounding like a new Star Wars droid, the name also clues you in to one of the biggest additions: there's new VR scenes.  Thankfully, you don't need a VR headset to play the game, because I don't have one yet.   In addition, there is a new graphics engine for smoother visuals, and the combat has be revamped.

For better or worse, the game starts with one of the new VR sections.  You can still view it without a headset, but I imagine it would be a lot cooler with the new hardware.  Some scenes pop up between chapters, while others have to be selected from the player's room.  In fact, most things are done from this new area. It's where you can view the scenes, or jump back into the stories.  As far as I can tell, all three stories from the original release are intact and unchanged, save for a few changes for the endings. 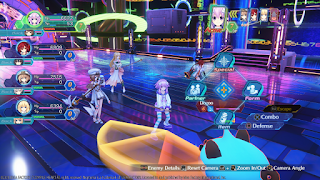 The other major change in the game is the combat.  Before, you would put your unlocked moves in a combo flowchart, which was determined by your weapon.   It...wasn’t my favorite, not by a long shot.  Now, moves require AP to use, but you can attack multiple times in a turn if you have enough stored up.  Plus, you have access to all of your unlocked moves...sort of.  Your weapon again determines which of the three types you can use, but you are free to use any in those.  It’s certainly an improvement.  The only real downside is that each move now costs money to unlock. Early on I just didn’t have enough to buy many moves, so I was stuck using the same ones for awhile.  After each combo or special move, you have to select “defend” now.  It’s not the most streamlined process, but it does work in the player’s favor.

That’s not all.   There’s now a skill that lets you heal when you de-transform from CPU form.  I think that’s pretty neat, and useful.  HP is fully restored after each fight, which does make the game easier and faster.  SP is used for special moves, which is built up while you fight.  SP build up feels a bit slow, especially in the giant battles, but the system is functional.  Thankfully, the middle act now allows all players to share items.  It should be less of a pain to complete.

Challenges from previous Neptunia games (like jumping a lot, or getting symbol attacks) return, but with a re-tooled purpose.  Before, they gave stat boosts. Now, they give bonus points that you can put into stats of your choosing.  The best part is that these stat points can be re-allocated on a whim.   No need to visit a special person, or use an item to respec your stat bonus, just decrease the number.  Part of the reason for this is weapon balance.  Now, weapons need a balance between to stats to keep a high accuracy.   You can pump everything into strength, but it will eventually lower your accuracy.  Keeping in mind what stats balance your weapon will still allow you to get stronger, but it’s not as simple as dumping everything into one thing. 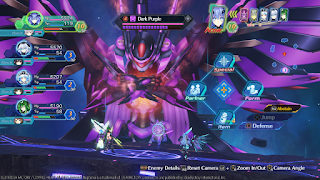 I don’t like all the changes.  It might be minor to some, but the saving has changed.  It’s nice that it saves so often, but it is an auto save, and it’s all in the same slot.   I would think most RPG fans prefer to at least have a few slots, or be allowed to manually save before stopping.  I know I do.  I haven’t had any issues with it, but it makes me a little paranoid.  Oh, and if you had any DLC for the previous release (yo), it sadly doesn’t work here.  I can guess there was a licensing issue for some of them, but at least Umio could have been there.

The new additions and reworked combat are nice, but not necessarily worth coming back for.  It might be a different story if you have a PSVR.  If you haven't played the first release, or wanted it to be better, then it is worth trying out Megadimension Neptunia VIIR.


The Good:
Combat was re-worked and is much improved.  Graphics look better, too.

The Bad:
DLC doesn't carry over from the previous release.  Game is auto save in one slot.

The SaHD:
So is the next remake/rebirth game 4GO VR?

(Review code for Megadimension Neptunia VIIR was received from the publisher)
Posted by The SAHD Gamer at 7:59:00 PM