The Witch and the Hundred Knight 2 (PS4) Review

It's still an action RPG, so combat feels very similar to last time, with a few modifications.  You run around and attack, but the stamina bar is gone.  This makes combat feel more fluid.  Being away from the castle still takes Gigacals (GCs), and they drain faster as they heal your damage over time.  Dodging no longer takes stamina, since that system is gone, but instead takes a tiny amount of GCs.  There is another powered-up state that builds from defeating enemies, now called Third Eye.  It's slightly more useful than its previous incarnation, but I still rarely use it.  Instead of a separate running command, moving uninterrupted for a bit will make Hundred Knight move faster.  This does drain GCs faster than normal, but not near as many as it previously did.  That's good, since running is more automatic than it used to be.  Running out of Gigacals is harder than it was previously, since managlands (more on those later) have a nearby enemy that restores most of them, and gaining a level (no longer only at the base) will fully restore Hundred Knight.

Like before, your combo is determined by what weapons you equip to the five weapon slots.  Further slots get a slight increase in damage, but they no longer have an associated die that you can match for a bonus.  I'm fine with this change as well, since that system felt a little more complicated than it needed to be.  It's streamlined, not dumbed-down.  There's also a new feature called Depletura.  If you land the fifth attack of your combo, "L1" will appear on your screen.  When you press it, Hundred Knight will dash toward an enemy and attack them.  If the hit kills them, you get a brief cinematic kill that restores some AP and GCs.  It's not bad, but feels unreliable after the first two hours of the game.  At least the extra damage is useful.  While the left stick can be used to aim the Depletura attack, I wouldn't do that.  It will auto-aim if you only press L1, and that is much more reliable than trying to do it yourself.

My biggest complaint with combat is the boss fights.  They are very adept at hitting you (read: some cheap attacks), which is compounded by the generous enemy attack hit detection.  Unsurprisingly, they also have a lot of health.  Once I figured out that you are supposed to run around, avoid their attack, run in, hit them 1-3 times, then repeat, I did much better at the fights.  Trouble is, that isn't very fun either.  Once you gain the ability to make enemies weaker, I'd suggest doing that just for the boss fights.  You can still die, but at least the fight is shorter.

The map has also received an overhaul.  Instead of picking a different area on the map, it is now one big, linked map.  Plus, you won't spend GCs to uncover it!  The different areas have different enemies and scenery.  Each "square" of the map is also randomly drawn from a batch, so it won't be the same layout the next time you enter.  Similar to the previous game's pillars, there are many managlands on the map.  Once activated, you can teleport to them, or back to the castle.  It makes moving around the map easy, and it feels much more like an adventure than before.  As far as I've found, witch domination, powering up at a pillar, and the bonus gauge are now gone, and I won't really miss them.  I'm not as fond of the enemies leveling up as you do.  Each area has a limit, but you will usually fight enemies close to your level.  Since it is harder to out-level them, you have to rely on other methods to gain significant strength.  Even so, I really like the map changes. 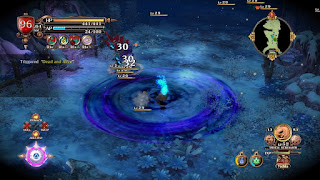 Items you pick up from enemies or treasure chests are still stored in Hundred Knight's stomach.  The available room expands when you level up, and at a much faster rate than the first game.  Instead of needed a special stone to clear out unwanted inventory, you can now digest an item inside, and gain a tiny amount of GCs from it.  Running out of HP will have you lose a few items (which isn't fun), but I still think the inventory changes are for the better.

The hundred knight will still gain facets as you go through the game.  Each one is like a class, with different damage rates of weapons, defensive ratings from armor, and skills.  Again, this is like the first game.  However, now the facets share the hundred knight's level instead of having their own.  You aren't hindering yourself to switch, which makes them more useful.  The skills they have can be leveled up, and because the skill point pool is based off your level, that is also shared.  You get plenty of points, so it's definitely worth powering up the skills you use.

While you can kind of get by using what you find, you really need to use alchemy to make weapons stronger.  The system is easier to understand than it was previously.  While you can make things stronger by fusing other pieces of equipment into them, there are special items that give bonus experience to the different types of equipment.  These are fairly plentiful, so I'd recommend using most of the ones you get.  Higher ranked weapons start stronger, but it's rarely worth dumping an older, higher level weapon into it.  Stick to leveling up legendary and maybe some epic weapons, and you won't need to replace them for awhile.  After you get farther along in the game, you get special materials that directly give bonuses to a piece of equipment.  You can use one for every level something gains, which can lead to some really big stat boosts.  Because the maximum level determines how many can be used, legendary items, even weak ones, are far better to use than even higher ranked common and rare ones.

So, the gameplay is improved, but what about the other aspect of the game- the story.  Last time the main character was Metallia, a very unlikable, foul-mouthed braggart.  It was probably the low point of that game.  In this game...well, not much has changed.  This time you get Chelka, a very unlikable braggart, and Amalie, a lying and useless witch hunter.  So, not really an upgrade.  Witches go from being overpowered and invincible to completely powerless in the next scene.  It was easily the weakest part of the game, so much so that I wanted to skip most scenes, especially if Chelka was in it.

The Witch and the Hundred Knight 2 is improved over its predecessor in the gameplay department, but not in the story.  Even so, it's worth playing for action RPG fans, and anyone who enjoyed the first game.


The Good:
Some great improvements over the first game to combat and map exploration.

The Bad:
The story is still filled with unlikable characters.

The SaHD:
What child would name anything Huninnmuginn?

(Review code for The Witch and the Hundred Knight 2 was received from the publisher)
Posted by The SAHD Gamer at 11:44:00 PM