Demon Gaze II is the sequel to the first Demon Gaze, which came out on the Vita...over 3 years ago?!  Wow, time has flown.  Anyway, that game was okay, but had some huge spikes in difficulty that left me kind of down on the title.  Since then, I've gained a better appreciation of the dungeon RPG genre, thanks to some really good titles.  I was anxious to see how Demon Gaze II stacks up to its predecessor, and to the genre as a whole.

Like most other dungeon RPGs, you move around a grid map and battle in first person.  The dungeons themselves are uncovered as you move through them, and there are a few trap panels, which will damage you.  As you did in the first game, the point of each dungeon is to find the magic circles, use a gem to start a fight, and win the fight to claim the circle.  When all circles are claimed, the way to the boss will be open.  Overall, the maps felt smaller than the previous game, and thankfully there were less gimmick panels.  There's also some nice shortcuts that you can open up.

To start a circle battle, you give up one to three gems.  There are gems for each type of equipment, plus some special ones that make the enemies stronger, or the resulting item better.  If you win the fight, you will get a drop of whatever type(s) of gem you used.  Use a helmet gem, get a helmet as an enemy drop.  While in the last game these gems were plentiful, you will have to buy a vast majority of the ones you use in this game.  I did get a few, but nowhere near enough for all the circles you encounter.  Considering how big of an issue money is, this is disappointing.  Also disappointing is the fact that you can no longer save your game at any circle.  This was a very nice feature, and I wish it had returned. 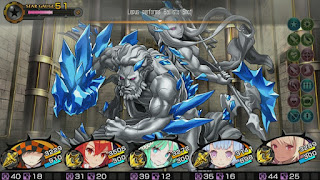 Battles themselves are almost identical to last time.  They are turn-based and first person view.  You pick what each party member will do on that turn, and then they play out in order of agility.  There's a lot of text while you do it, so you can use the triangle button to speed it up.  The same button can be used to repeat the actions you did last turn, which is great for grinding.  One reworked feature is demonize.  Since your party members are previous bosses, who have powered forms, the demonize command will change them into that form.  Your party members will power up, gain access to new skills.  Every turn, it takes one level of star power per character.  you can get more by killing enemies.  It's very useful on bosses and tough enemies.  The star power gauge is also used to defend from star gaze, an ability that strong enemies have.  If effected by star gaze, your non-main character party members attack each other and you.  While an interesting idea, I don't like that since it makes fights against those foes take a lot longer, because you have to save the gauge for the counter skill, instead of doing more damage with demonize.  There's also demon fusion for another stat boost and advantage in battle.

Boss fights are important, because that is how you recruit new characters.  The first three bosses can be done in any order.  These fights just felt right, since I didn't need to grind to beat them.  However, I had to grind to beat every boss after that, which wears me down.  It does give a bit of extra money, which you will need, since resurrecting a character gets ridiculously expensive as they level up.  Dying would be less of an issue if bosses and other strong enemies didn't have whole party attacks and such high damage skills.  Also, while instant death spells are rare in Demon Gaze II, they are always a big no-no.

If you have seen any of the PR for this game, you probably noticed that dating sim elements are mentioned.  This is the maintenance feature, and it is used to power up you and your party members, plus give them some personality.  Maintenance costs one crystal, and you have to poke the person at some part of their body.  Yes, it's pretty much as weird as it sounds, and reminds me of Moero Chronicle.  It is not as risque as that, but it's on the same street.  The real poke is just one try, but there are a few practice pokes beforehand.  At lower likability levels, it will leave up your best spot.  Getting a "perfect" is much better than a "good", and will raise the likability more as a result.  When it is at 100%, you can take the demon on a date and gain a new skill or stat boost.  The skills and boosts are good, and worth doing the dates for. 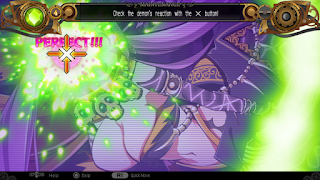 Prometh is back, and she can store your items, resurrect party members, and strengthen your equipment.  To strengthen something, you must use ether.  Ether is gained by sacrificing a weapon or piece of armor, and you only gain ether that relates to the specific thing you sacrificed.  So if you recycle a katana, you get katana ether, which then can power up another katana.  It probably works pretty well, but I don't have enough extra stuff to really play around with it.  Remember that you have to buy gems now, as they rarely are given out beyond a few early ones.  I don't really have the extra money to blow on extra gems, which I would just destroy to power up other ones.  In my mind, it's a bit of a design flaw.

So would a fan of dungeon RPGs like Demon Gaze II?  I think so.  Most aspects of the previous game have been improved, although I miss the abundance of gems and being able to save at any unlocked circle.  I really like having the demons as party members instead of making my own party, as it gives them actual character.  While it takes longer than that game to reach a point where grinding is necessary, it still occurs unfortunately.


The Good:
A dungeon RPG that is improved over its predecessor in almost every way.

The Bad:
Still requires grinding.  Money and equipment are harder to get.

The SaHD:
Why do so many demons start over at level 1 when you recruit them?  That's only mildly helpful.

(Review code for Demon Gaze II was provided by the publisher)
Posted by The SAHD Gamer at 10:33:00 AM