Tamsoft brings us another action game, this time featuring girls who can transform into cars.  Named Drive Girls, this sounds like it has the potential to be one of the best games based off the premise.  In execution, it is anything but.

So you run around and attack various "bug" enemies.  The square button is your normal attack, which builds up your EP meter.  Triangle does a stronger attack, which takes EP.  Well, if you have it.  If your EP is empty, Triangle...does the same attack.  I don't know if there's a difference, but since you don't need EP to do it, why even take it in the first place?  You can also hold either of these buttons to do different attacks.  For some strange reason, this isn't mentioned in the game or the manual.  Yup, you have to look up game info online to even find out such a basic thing.  It's a pretty dumb oversight, but not the last.

The X Button will jump, and pressing the Circle Button will dash/dodge.  Unfortunately, dashing is your only defensive move.  There is no blocking in Drive Girls, and it is sorely needed (more on that in a bit).  You can only dash so many times (depending on girl and weapon) before needing a second to recover, which is a great time for the enemies to hit you.  Holding the Circle Button will sacrifice your EP to fill your Overdrive Gauge.  When filled, you will have double damage for a minute, which is really crucial, and the goal of any fight.  Trouble is, the gauge will decrease on its own, and the effect only last so long.  Plus, you have to build up EP, shunt it into the Overdrive Gauge, and hope you don't get hit while doing so.  In practice, this is way too difficult, especially for something the game relies on and expects you to do regularly.

Another use for EP is to shoot your gun.  Ostensibly, you would select it like a normal item to equip it.  This is not intuitive and cumbersome.  You can also tap the touchscreen to switch.  The manual does show this in small print at the bottom of the controls section, but again, the game doesn't mention it at all.  However, I found tapping the screen to switch wasn't really that responsive.  It does skip animations, which is what the high level play of Drive Girls is based on.  Still, tapping the screen in the middle of combos or whatever else is also awkward and cumbersome.  Also the actual aiming of the guns doesn't seem that great, either.

So now that we know the controls aren't very good, and the game doesn't tell you basic functions, how is the actual combat?  Sadly, it is no better than anything mentioned before.  Enemies are very quick, aggressive, and do real damage quickly.  Did I mention there are lots of them?  They also only use the same three colors so it can be hard to pick out the leaders quickly.  You can lock onto enemies, which sometimes can help, assuming it locks onto the one you want, or there aren't more than one strong enemy.

Oh, they also rarely react to getting hit, also known as 'staggering'.  So, enemies are fast, chase after you, hit you, juggle you, do good damage, and punish you for attacking them?  Yup, they have pretty much every advantage they need to destroy you.  I'm not even sure Dark Souls is that unbalanced.  Searching online does have information to make battles palatable.  Basically, you have to animation skip by switching to your gun and back, then get in Overdrive all the time.  It's sad that the "high level" play is what makes the game, well, playable.  That should not be the case.  I'd let it go if you could grind for experience or something, but there are no levels in Drive Girls, and no selectable difficulty for missions. 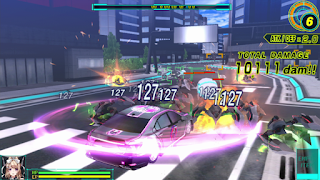 Since you don't gain levels, what can you do to get stronger?  For one, there are stickers.  Seeing as how the girls can transform into cars, having sponsorship-like stickers makes sense.  You can see what bonuses they give, and change them freely with the ones you have acquired.  If you collect a full set, you can equip that for a set bonus.  According to the stat bars, the set bonus replaces the individual bonus, but the in-game tutorials claim they don't.  Since there are only vague bars and not  actual numbers, I'm not sure which is lying to me.  Also, the bonuses are all percent based, meaning if a character is bad at something, increasing it by a percent instead of a flat number isn't going to make them much better.

You can also equip L Gears for...some kind of boosts.  As far as I can tell, you have to buy them for each character, which will get expensive.  Maybe that's what you grind for instead of experience...money and stickers, so you can buy stuff for marginal increases.  Anyway, the gears can be re-set, and put into one of three categories- physical, strong, and accel.  What does each affect?  I don't know, and the game, of course, won't tell you.  I can take guesses, but I shouldn't have to.

Oh, right, you can also turn into a car.  This helps you drive from one group of enemies to the next, or even compete in the few races the story mode offers.  Control-wise, driving is fairly competent.  Enemy groups seem to be spread out far enough that it's a pain to walk to them, but not so far that driving is that much better.  You'll be in the car mode for a second or three.  Well, that's when they let you.  After the first few levels, they start placing landmines on the road so you won't drive.  I'm not sure who puts the landmines down, as the bugs don't trip them, and they don't seem smart enough to make that many personal explosive traps when they could kill you far easier with their cheap attacks.  I do know that placing the mines negates using the car, which kind of negates half of the game's title.

The story structure is similar to other Tamsoft Vita games, where you select a chapter, then the level you want.  It's laid out very well.  There are also multiplayer missions that can be completed by yourself (except maybe the very high level ones), locally with ad hoc, or online.  I'll give the game props for having a good selection of missions to complete, even if the ability to do so is beyond me.

If you couldn't tell already, I was very disappointed in Drive Girls.  The concept is silly and should have been great, but almost every aspect of the game was bungled.  I like some of Tamsoft's action and action rpg games, but it feels like the quality declines with each new title.  Unless you want to master high level play to actually make it through the game, and don't mind mashing buttons and the touch screen to make it happen, I recommend letting Drive Girls pass on by.

The Bad:
The combat, controls, equipment...you know, the important stuff.

The SaHD:
No, seriously, why are there landmines and who put them all over the place?

(Review code for Drive Girls was provided by the publisher)
Posted by The SAHD Gamer at 3:59:00 PM