First off, I know very little about the Fate franchise.  I haven't seen any episodes of the show, I haven't played the original game, and the games I have played, I have not put much time into (yet).  I recognize a few characters, and that's about it.  So when I saw the new game was a vs. army hack and slash akin to my favored Warriors series, I was on board to try it out.

Battles are very reminiscent of Dynasty/Samurai Warriors, but with their own unique additions that make it its own experience.  Normal attacks are on the square button, and strong attacks are on triangle.  Using the strong attack at different points in the combo will give you different combo enders, and your attack combo expands as you gain levels.  So, what's different?  For one, you get a dash move.  It will hit enemies, but doesn't do damage and doesn't count as a hit.  Also, R2 will unleash your Noble Phantasm move.  You have to find all three pick-ups for it on the map to be able to use it, but it does a ton of damage.

Characters can also activate Moon Crux/Drive, which will power up their attacks, and, in the case of Nero and Tamamo, give them a new outfit with different attacks.  Unfortunately, these transformation scenes  (and the Noble Phantasms) don't have subtitles.  Since the game is subbed only, I have no idea what they are saying during these scenes.  Lastly, there is the Extella Maneuver.  Located under a servant's health bar are the EM bars that show how much energy is stored up.  When you press the circle button, your character dashes forward and begins to do a flashy combo to the target and surrounding enemies.  Thankfully these will target stronger units first, so you aren't wasting time trying to aim them.  As the attack is going, you can keep pressing circle to use more bars to extend the combo and increase its damage.  These attacks, besides being easy, are fun and useful.

Battlefields are divided up in a series of rooms connected by passageways.  Unlike other hack and slash games I have played, you press a button at the entrance to another room, and zoom over to it.  This cuts out some time wasted running from one room to another.  There are smaller hub-like rooms that have no enemies, but have portals to connecting rooms.  Each main room is worth a certain amount of points.  Whichever side controls it gets those points.  The first side to twelve will basically win.  In your case, it unlocks the boss for you to defeat.  If the enemy gets it first, then you just lose.

To take a room, you must kill a certain number of commander units, called Aggressors.  The number needed is shown toward the lower right hand side of the screen.  To get them to spawn, you must cut down a lot of the normal grunts in the room.  As you do, the Aggressor icons fill up.  It's a well thought out system, and I really appreciate how transparent it is in showing how many Aggressors you need to kill, how many are currently spawned, and how close you are to spawning more.  If one of your rooms is under siege, there is a similar function to take it back.  Usually it involves killing less Aggressors, though.

The game isn't super difficult once you understand the flow of battles.  Enemy controlled areas spawn horrible creatures called Plants that spew out Aggressors, which will quickly assault other rooms you control.  They are too big of a threat to let go for long, so most times you have to drop what you are doing and take care of them.  This was a lesson I learned the hard way.  I started the game on normal, and even in the second battle is was very hard to make headway.  If I left a Plant alone for too long, the battle was a constant back and forth loop that was hard to break.  Afterwards, I started picking easy, and it was much more fun, but still tense.  I still had to pay attention to the battlefield and take care of the high threats quickly in order to assure victory.  If the game was dubbed, it would be easier to spot problems, since you could listen instead of having to look at the map every minute or so. 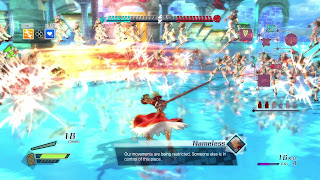 In addition to leveling up, characters can also equip Install Skills.  These are super helpful passive abilities that can increase damage, make you resistant to certain elements (this helps deal with the zone traps on the harder difficulties), and other useful functions.  Repeated pick-ups will combine them together up to +20, making them more effective.  As your bond with your servants increases, the amount of Install Skills they can equip increases, and also connects them.  Placing skills of the same color together will increase their effectiveness, so be smart when placing them.  Overall, a nice system for passive skills.

There are also Mystic Codes, which your main character (the master) can equip.  In battle, you can use any of the skills present on your MC by using the d-pad.  Each ability has a certain amount of uses.  There are a lot of different ones to equip, but unfortunately, there is no way to make your own.  I found some that I liked, but none of them were perfect for my play style.  It helps to make a few, so you can switch them out for specific purposes, like elemental resists or item drops, but it is a pain to go through all the ones you have to find the one you want.  A sort or favorites function would have been nice.

Now for the story of the game.  First off, there is a lot of dialogue in this game, much more than I was expecting (especially in the Dawn Arc).  I'd say about half the playtime is dialogue.  There are places where you are prompted for a response, some of which will increase the bond with one of the three leading ladies.  The story was definitely a bit confusing at first, as it seems some prior knowledge of the Fate lore is required.  I eventually picked up on most of it, and the story itself is pretty well contained, once you know some of the backstory.  I think this is more of an offshoot to the main lore, since it doesn't feature what I think of as the main characters, but does have the ones I recognize from the PSP Fate RPG that I have somewhere around my house.  I did learn that the Fate combatants are all historical and mythical figures.  That's something I am very interested in, so I'm definitely going to start getting into more of the games!

The main story is told in four parts, and each takes around 5 hours to complete.  It would be much less if you just skip through the text, but where's the fun in that?  As you make your way through the story, you will unlock more characters for use in their own side stories.  These are short- only about 3 fights- and feature much less dialogue between them.  However, it does provide a bit of backstory for some of them, and lets you actually use the other characters, so I enjoy it.  There are also free battles, where you can re-do any of your completed battles.  The layout is different than what I am used to (you pick who your opponent is first, then which stage they are on), but it's still the best way to grind, go for the hidden challenges, or repeat each level on a harder difficulty.

Overall, Fate/Extella: The Umbral Star was a fun hack and slash game.  The Extella Maneuvers are flashy, cool, and effective.  Noble Phantasms are neat.  There's a lot of dialogue and story.  Battles are a lot more tense than what I am used to, and the whole experience was enjoyable.  I don't know how well it fits into the Fate franchise, since I've seen very little of it, but as a hack and slash game, it is worth playing.  It also made me very interested in checking out more of this universe!


The Good:
Familiar hack and slash with its own unique additions.

The Bad:
Battles can be very tense if you aren't fast enough.  Enemy plants can spawn with ridiculous speed.

The SaHD:
I know it's a big, important object, but there are four separate characters that are related to the sun.  Seems a bit high to me.

(Review code for Fate/Extella was provided by the publisher)
Posted by The SAHD Gamer at 7:50:00 PM