Fairy Fencer F came to US shores on the PS3 two years ago, but has received a face lift and new added content for its Advent Dark Force release on the PS4.  Besides looking better, the game has added some content to the original story line, plus two new routes for players to enjoy.  The party battle limit has also increased from 3 to 6 - a welcome addition in my book.

One of the newer story changes is in the first 10 minutes of the game, where a new dungeon has been added.  It also seems that the game has relaxed a bit on the missable quests.  You can still mess up an entire playthrough if you aren't careful, but it isn't as easy to do so as it was before.  My only gripes with the new additions is some of the dungeons are very dark, which strains my poor eyes, and how easy it is to miss the new routes.

To make your way through the game, you basically view an event scene (usually in the town), and then proceed to the next dungeon to beat the boss and further the story.  Dungeons are zones that allow you to run around, do some light platforming, find treasures (hidden and not) and battle enemies.  Enemies wander around the map, and if you make contact with them, a fight will start.  If you manage to hit them with your weapon, then you get a preemptive strike, allowing you to move first.  If they catch you from behind, or early on in your attack, then they get the advantage in the ensuing scuffle.  Each dungeon can have anywhere from 1-5 areas to go through, and most of them have a save point near where the boss battle occurs.

Battles have a lot in common with the game's Neptunia cousin.  When you character's turn comes up, they have movement and attack radii.  It can be tricky to move around some of the other enemies and characters to get to the fringes of your movement when you need to.  Normal attacks can only hit one target, but the radius is one of the stats you can increase, ending up with a very large zone to target an opponent.  Eventually, your characters will have access to a combo that allows you to set your attack strings, and you get three separate ones to boot.

To fill these out, you will purchase attack moves from different weapon types as you progress through the game.  You can mix and match as you wish, but each attack has a certain wait value, that will push off your next turn, so it might be in your best interest to not put on all the strongest stuff.  Plus, enemies are weak to some kinds of weapon attacks, so it is also not best to fill all three strings with your character's default weapon.  There are also launch attacks to allow you to air combo enemies, which are fun and also practical (since any breakable parts will take damage in the air, regardless of weapon type). 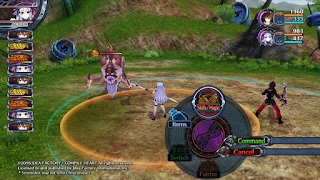 Next to your character's portrait there is a tension meter, which will allow you to Fairize.  This temporarily merges your character with their fairy partner, giving them awesome and impractical anime armor.  It also boosts their stats and gives them access to their super move.  It's a very good thing to get you out of some of the harder fights, and it seems to last longer than the original version.

The furies you get through out the game can be infused with extra powers with the Godly Revival system.  Each fairy has a rank, which determines what power set you can give it.  These will affect the character that equips it, but also can be used on the world map.  A fury can be stabbed into the ground, and provides its battle effects to whatever dungeons its area touches.  They have a variety of effects, from raising and lowering stats, giving extra money, or even changing what enemies appear.  The latter is very useful in getting certain drops or completing several quests.  It's a unique and cool system, but every positive or useful effect unfortunately also comes with a negative one.

Even knowing several things to do because of the PS3 release, it still took me over 50 hours to complete my first run through the game.  Granted, I was grinding for several hours to finish some of the quests so I could get better stuff next run, but it is still a beefy runtime.  While this encompassed a few changes, I still had not run into the new story paths.  At first, I figured I would need to beat the game once to make them available.

I was wrong.  You do have to repeat the first half of the game normally (about 10-20 hours into the game) before you can do the completely new story routes.  There is also zero indication how to get to these new additions.  I had to look up info on the Japanese release to see what to do.  I don't think it is too much to ask to have some indication to the player what you need to do in order to see this new stuff, since I'm sure many of the players of this were also fans of the original release.  We already have to do the whole game over again because we can't import our saves, so why try to have us spend even more time we don't have to?  Part of me thinks I should have seen this coming, given how the game likes to make things missable. 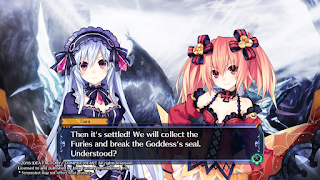 The new game plus the game has is very, very good, though.  It shows you what carries over, and even allows you to disable certain things if you so choose (I keep it all).  This makes subsequent runs much, much faster (I got through the first half of the game in 4 hours).  Plus, you can keep using party characters that you don't have access to.  This is important, since different routes have different usable characters.

Overall, I am very happy with Fairy Fencer F Advent Dark Force.  I liked the original release, and this is even better.  I like all the changes and new content (except for how dark some of the dungeons are).  I would say the game is worth it for JRPG players and fans of the Neptunia series, and any others that wanted to play it but waited for this release.  If you played the PS3 release, it is worth it to come back, unless you are unwilling to play the game over again.  At least you theoretically only have to do half the game over again to get to the new content.

The Good:
Advent Dark Force improves every part of the original Fairy Fencer F release, and even gives return players a good chunk of new content...

The Bad:
That you still have to put in about 15 hours to even get to, assuming you accidentally trigger the new routes, or look it up.  It would be nice if the game told you!

The SaHD:
Seriously, I would have liked to know...I ended up going through the game twice (65+ hours!) to get to the new routes.  At least I have the trophy for beating it on hard now.  Also, did Tiara get a new voice actress or am I crazy?


(Review code for Fairy Fencer F Advent Dark Force was provided by the publisher)
Posted by The SAHD Gamer at 2:57:00 PM