Atelier Sophie: The Alchemist of the Mysterious Book (PS4) Review

Atelier Sophie: The Alchemist of the Mysterious Book is the latest game to join the prestigious Atelier series.  The seventeenth iteration of the series, Atelier Sophie works extremely well as a stand-alone title.  If you have never played any of the Atelier games before, this one is a really good one to start with.  The game begins with Sophie, a young girl who is looking to fill her deceased grandmother's role as an alchemist.  She takes advantage of her grandmother's legacy and in the process discovers a magical talking book named Plachta who remembers nothing of her past.  From there the story progresses as Sophie works to restore Plachta's memories and improve her alchemy skills.  Throughout this process she makes friends and helps the townspeople.  Unlike most story-driven RPGs, there is no immediate opponent, no "bad guy" to defeat.  Though there is a "final boss", there is no in-game pressure to defeat it.  Unlike many of the previous Atelier games, there is no hard time limit.

Perhaps one of the more interesting things about the game is how Sophie learns new recipes.  Previously in Atelier games, recipes were organized by type, in a giant list, and the alchemist learned new ones by either discovering them or by substituting different ingredients in existing recipes.  This time around, recipes are organized in trees, and Sophie learns new ones based off of different methods of inspiration.  In other words, what she does effects what she learns.  While this can be an easier way of discovering recipes, there are some instances where the "clues" the player is given are difficult to interpret, making it hard to complete a recipe tree without turning to sources outside the game for assistance. 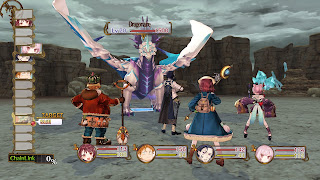 The battle system is another area where things have been tweaked from previous games.  Though there are many similarities, the addition of a synch meter and the ability to switch between defensive and offensive modes gives a player more options for keeping characters alive.  As the synch meter percentage rises, the in-battle characters perform automatic actions: in offensive mode, they will perform assist attacks, and the higher the percentage the more characters will assist, culminating in a unique attack for the fourth character to assist once the gauge is at 300%; in defensive mode it is much the same, with characters defending each other with a unique defensive move per character when the gauge is maxed out.  Mastering the gauge becomes essential as the player progresses through the game, as battles become more and more difficult.

There is one aspect of the game that is moderately confusing, and it harkens back to Atelier Shallie.  Once a character hits level 20, they cease to gain levels and instead gain "adventure points".  These points can then be spent on stat bonuses, skill upgrades, and special abilities.  On the down side, however, the characters no longer gain these things naturally.  In both games it was an oddity, to switch between natural level progression and player-controlled level progression after a certain point in gameplay.  The question at hand is why, if this is such an integral part of the game, this feature isn't available the entire time.  It is as if the developer is saying "we'll trust you to control your character's level ups, but only after you've proven you can play the game".  While it isn't something game-breaking or even particularly unique, it definitely takes the player time to adjust.  Like someone learning to drive in America and then suddenly having to drive in the UK, a player has to constantly remind him- or herself to pay attention and distribute points, lest characters fall behind and become a liability.

Overall, however, the game was a well-crafted addition to the Atelier brand, with pleasant characters and a clear and understandable story.  It was fun to play, and definitely one I would recommend for anyone new to RPGs, or to the Atelier games.

(Review code for Atelier Sophie was provided by the publisher)
Posted by The SAHD Gamer at 6:08:00 PM