What happens when you mix shmup gameplay with pixel art and the internet?  Shooting Stars!

No, really.  Shooting Stars! is a shoot-em-up (or shmup for short) game where you and your laser-eyed cat take on memes, celebrities, and internet personalities of all sorts.  I think just about everything in the game is a pop culture reference to something.  Enemies, attacks, bosses...you name it.

As a shmup, you move your character around and shoot...everything.  You start off with a basic laser (from your cat) that can upgrade when you pick up food items.  These items are randomly given during the game when an enemy is killed.  Being just food items, it isn't readily apparent what each upgrade will do, and some are either very specific (the clone super move will copy your powerups) or not very useful.  So try to remember at least which ones you don't want to pickup.  The only one I really avoid outright is the really big hamburger, since it upgrades your shot to include missiles.  While this does up your damage, each missile explosion will shake the screen.  When you are trying to delicately dodge around a lot of small shots, shaking the screen is a huge detriment.

Besides your normal shot, you can also have one type of super move equipped.  These are also randomly dropped from slain enemies.  Like the food power-ups, each super varies in usefulness and effect.  Most are big attacks that can clear out multiple enemies, but there is also one that gives you temporary clones on the side to widen your attacks, and a shield that makes you invincible for a set amount of time.  Thankfully, these super moves are on a cooldown timer instead of a use count, so fire away!  You can only have one on at a time, so you have to hover over another for a few seconds to pick it up.  That is super useful so you don't accidentally pick one up that you don't want.  Also like the fruit, each might not be so obvious as to what it does, so try to remember the ones you like and skip the rest after you have tried them all.

Once you start the game, there are six stages, the first five of which are random.  There are many different bosses, and each one has a different stage that must be completed before you fight them.  They also each have unique attacks and shot patterns, which I honestly didn't expect.  It's also nice that the order is pretty random, leading to a different experience each time you go through the game.  The sixth stage is set, and will always be the final boss.  After besting him, you then continue through the game again, each run getting harder and harder, until you die. 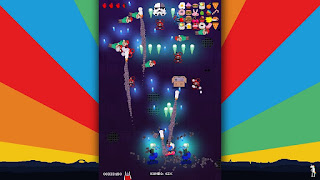 There are three ways to control the game.  You can use a keyboard, mouse or controller.  For me, the keyboard was easily the weakest of the three, and mostly because moving isn't as precise with the arrow keys.  The mouse offered really quick and precise movements, but you have to hold the shoot button to move, meaning you are constantly shooting.  This isn't a huge problem, but you will just constantly hear the laser noises.  Plus, it tends to cramp my hand after 10 minutes or so.  The controller was the most comfortable to me.  Moving isn't quite as fast, but it was much more comfortable and natural.  Either way, they all worked, but I would recommend using a controller or just the mouse.

It only takes about 10-15 minutes to get through each cycle.  However, because the goal of the game really is getting a high score, you are meant to replay it a lot.  The random nature of the bosses and powerups makes this much more palatable than some other shmups.  Your high score will also get posted to the leaderboards.  Bosses sometimes drop cards to collect, adding another element to extend playtime if you desire.  The game itself isn't too hard.  You get several hits before you die, but only one life.  Occasionally there are drops to restore health or armor, so there is some leniency.

Overall, Shooting Stars! is a very competent shmup.  I enjoyed playing it, and it seems like a good "pick up and play for 10-20 minutes at a time" sort of game.  If you aren't super into pop culture, the game might not click with you.  Although I didn't know everyone referenced, I still found the game enjoyable as a shoot-em-up, which is a genre I really like.
Posted by The SAHD Gamer at 12:50:00 PM