The Skylanders games have been around for a few years, and each year a new thing is added.  In Skylanders: Superchargers, that addition is vehicles.  While initially hesitant about how this could change the series, I was very open to giving it a try and see how this new direction plays out.

Surprisingly, it goes really well and fits in with the franchise.  Where before there were specialized gates that required a specific element or type of Skylander, now there are sections that need one of the types of vehicles.  In practice, each part with a vehicle is one of the stars to earn in a level.  Thankfully, you only need one of any vehicle (a land one is included in the Starter Set) to get through the whole game.  Before, each level had up to three stars that you could earn, one from beating the level, one from being under the par time, and the last for getting all of the hidden stuff in a level.  I actually prefer the new way, of each vehicle section is a star.  To me it felt like doing it that way made it so I would want to get and use each type of vehicle, rather than I had to.

The non-vehicle sections of the game are very similar to the last game.  You run around and fight minions of Chaos, jump around the platforming sections, and solve a puzzle or two while searching for hidden chests.  The controls worked fine for the most part.  The only problem I had was with Supershot Stealth Elf.  Her cannon has a function where if you hold down the button, it will keep shooting.  Sometimes it didn't seem to register that I was holding it down.  Also, getting hit or slight changes in terrain would break it off, and I would have to then press and hold it again.  It was kind of annoying, but not a huge deal.  There were no problems with Spitfire, and he is also really fun to play.

While the game offers a lot of new stuff, how does the old fare?  The previous game in the series, Trap Team, alienated some players because it relied too much on the new.  In a way, this is true for Superchargers as well, but it doesn't feel as bad.  Any character can ride any vehicle, but you get a boost for matching the element, and a special boost for matching the actual pilot to their vehicle.

You also unlock parts to modify your ride, but the special supercharger Skylanders are required to put the upgrades on.  It's a bit of a downer, but workable, since the Starter Set comes with two.  The worst part about that, though, is in the hub world.  Walking near the vehicle station will have a voice remind you that only the supercharger Skylanders can modify the vehicle, and it gets really annoying if you are walking around the hub with a non-supercharger.  The new portal that comes with the Starter Set also has a slot for the traps from Trap Team, and they unlock a Skystone card of the trapped villain, plus give you a limited number of new attacks while you are driving or flying around. 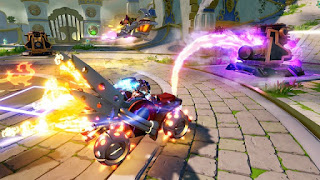 Now onto the important part - how did my 8 year old like the game?  It's probably no surprise, but he loved it.  He took to the vehicles immediately.  When asked what his favorite parts is, it's driving the car around.  He likes to go into the vehicle testing area and just drive it around while shooting bad guys.  While we don't have any other vehicles (yet), my son really wants to get some more, so I'd say the vehicles are a good addition to the series!

If you play two player co-op, the vehicle controls are split between the players.  One player drives and the other gets a reticle for attacking and gathering money.  It works really well and is pretty fun, giving both players something meaningful to do.  My son was also kind enough to switch with me fairly often, but he preferred to drive.  As mentioned before, I could collect the money and bits while he was doing so, which made him able to focus on not getting hit rather than trying to make all the jumps to get collectibles.

There's over 10 stages to go through, and each takes longer than I thought it would.  This is good from a gameplay standpoint, even if I would prefer shorter levels and more of them.  Each stage would be even longer if we had the other two vehicle types.  There's some extra challenges, races and missions in the hub if you want more to do.  I'd say you get some decent value from the game, even if my son doesn't do much to find every item and secret in a stage.  I have no idea why, since I figured he would pick up on my completionist tendencies.  Also in the game, there is a lot of dialogue between the characters.  Most of it felt unnecessary to me, but my son didn't mind all the talking.  It would be nice to have a function to skip the dialogue and cut-scenes, though.

Skylanders: Superchargers was a lot of fun to play.  The driving sections were fun, and played well in single player and co-op.  While the older figures do have some limitations, they weren't as bad as the previous game, as any character can drive any vehicle.  My 8 year-old son really liked the game, and especially loved driving the car around.  I'm looking forward to getting an air and sea vehicle to play the sections of the levels I missed.  If you or your kids like the Skylanders games, you should enjoy this one as well!
Posted by The SAHD Gamer at 4:13:00 PM