Hyperdimension Neptunia Re;Birth 1 is a remake of the first Hyperdimension Neptunia game.  Not content with being just a port to the Vita, the game boasts a reworked story, guest appearances by later characters, and the battle system from the later games.  To me, changing the story is a mixed bag, since it was the one aspect that I wanted to experience in the first game.  It's a good thing for those that completed it, since they have something new to experience, but since most people skipped the first, they are the ones missing out.  Like all of the Neptunia games, the story is silly and has some great lines, and it was pretty enjoyable.

Sadly, a few of the characters in the original have not returned for various reasons (real world or otherwise).  To replace them, some of the characters from Victory have been added.  The upside is the DLC tickets I purchased for the first game aren't as much of a waste, since I won't be able to use them here.  The bigger upside is you actually get the other CPUs in your party at various points in the game.  Before, you had to do crazy long quest chains and raise their shares very high to get them.  It feels more natural to get them this way, since they fit better into the story and the overall quest of the game.  There are three characters that are DLC, and thankfully they are cheap.  As of this writing, they are only a dollar each, which is better than the previous games' prices for characters (about $3 each).  They aren't necessary, but fans of the series will probably like to purchase them.

The gameplay is more in-line with the sequels than the original Neptunia.  Battles are started by contacting a creature on the map, and then fought in a small area.  You can move in a circle around your starting location, and your attack area is a little box.  Different weapons and skills have different areas of effect, and it is very possible to hit multiple enemies with a single turn.  EX Finishers and EXE Drives make their return, allowing you damaging combo enders and super moves respectively.  It's a good system, because it encourages some strategy, like where to position your people, and which attacks to use when.  It's an improvement over the original game, simply because you can heal outside of battle.  Well, you can with items, and they are easy enough to afford. 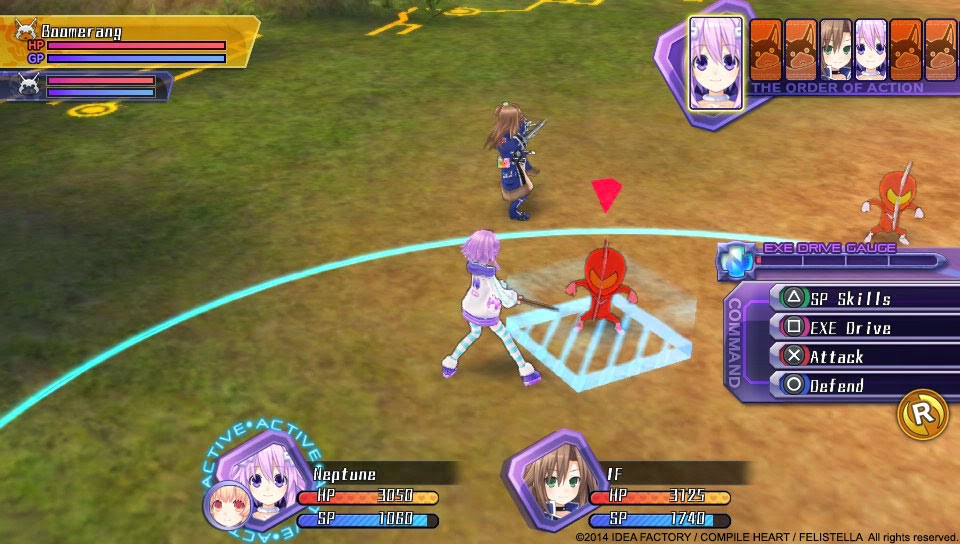 Another addition to the game is the "Remake" system.  You will frequently get plans that, when developed, allow you change dungeons.  They can be added to the world map, have the harvest items change, or even add stronger enemies.  It's a nice system and easy to understand.  There was a similar thing with flags previously in the series, but this is much more fully realized, plus easier to use.  Several of the settings can be toggled off to meet your needs.  The plans can also add new items to the shops plus other bonuses, like having a 100% escape chance from battle.

Although, with this system it is possible to open up extra dungeons before you have a hope of defeating the enemies in them.  My biggest gripe with the game is the balance, and the aforementioned aspect doesn't help.  Bosses tended to be much, much stronger than the enemies in their dungeon.  While this makes sense, it was annoying to be able to easily beat every encounter in a dungeon, but still get wrecked by the boss.  Occasionally, there are even times where there is a back to back boss fight, where the second boss is significantly stronger than the first.  The difficulty balance of this entry into the series isn't quite as good as the previous ones.  The times I encountered something similar in them, it was much later in the game.

Sadly, the best way around this is to grind.  I ended up grinding in pretty much every dungeon, so I would have enough levels to beat the boss, have enough materials for plans, and be able to complete quests.  The grinding itself isn't so bad, but the necessity of it put me off.  When a boss or tough enemy didn't kill me, I kept on playing and enjoying the game.  The random difficulty spikes are bad, but once past them the game was fun.  So you will get a good amount of playtime from the game, but a chunk of that is because of all the grinding you need to do.  Either that, or save some time and use the remix option to make enemies weaker.  It seems to only affect their attack power, not their HP, but every little bit can help.

Hyperdimension Neptunia Re;Birth 1 does a really good job remaking the first game and fixing the biggest flaw it had (the no healing outside of battle).  While sadly the only way to experience the original story is with the original game, this one fits better into the later continuities, and is just as silly and funny as all the others.  The game is easier and more fun, but requires lots of grinding to make your way through the game.  At times, the difficulty spikes made me want to stop playing.  I'm glad I didn't, since the game is really engaging when I wasn't seeing the game over screen every 20 minutes.  Although you will see each dungeon map reused for other dungeons, the game is fun and fans of the Hyperdimension Neptunia series will enjoy it.  This also makes a great entry into the series, since it is a remake of the first game, and gives a good taste of the series as a whole.
Posted by The SAHD Gamer at 11:27:00 PM