Battle Princess of Arcadias has finally come to the US as a digital only title.  I was anxious to try it out as the gameplay sounds like a fun reminder of the old 2D beat em ups from back in the day.  The first thing I noticed upon booting up the game was the style of the game.  It's a nice storybook or watercolor-looking world that in some ways reminds me of Vanillaware's games.  However, the animation is a different story.  Maybe it's keeping in with the storybook look of the game, but the animations look like they were made in Adobe Flash.  They aren't so much horrible as they are very stiff and puppet like.  The game's audio is also Japanese only with subtitles, which is a bit of a bummer.  Better than the game not coming out at all, but of course dual audio is preferable.

Combat is pretty fun.  You have a standard attack and a heavy attack.  There are some basic skills (combos), and a few more are unlocked as you level up.  You can jump around, attack enemies and rack up combo hits.  The easiest way to lose your combo number is to get hit, which happens easily.  The guard in the game doesn't cut your animations, so it can be difficult to successfully guard on the fly.  The normal fighting levels (the first battle type) will have you against several groups of enemies, and finishing it will give you some bonus loot.  These levels aren't too hard, which is good because you will need to grind on them several times.

The second type of battle is a siege.  These are fights against one big monster instead of groups of smaller ones.  You have troops to command and help whittle down the monster's shield.  Once the monster is hit enough, the shield will drop and you will finally damage its health.  The siege monsters do a lot of damage and easily kill many of your soldiers if you don't have them in defensive mode.  I found it cumbersome to switch the troops from attacking to defense when it was better to do so, and you don't really have much time to do it.  I found it easier to get a level or two over the monster and leave the soldiers in defensive mode so they don't lose the battle for you.  While attacking the monster, you have time for one combo, then block, then rinse and repeat.  If you build up your morale meter to full, you can unleash a powerful super attack that will help turn the tide in your favor.  You will need that same meter to switch the troops from defense to attack, so use it wisely.

Skirmishes, the third type of fight, are very similar to sieges.  Instead of fighting a large monster, you fight another army.  While your troops fight in the background, you fight some enemies in the normal plane.  If you manage to kill off a group, you will get a chunk of the morale meter.  Each type of troop has strengths and weaknesses against the other troop types, so matching them up helps immensely.  Changing your soldiers to another type costs some of the morale meter, so fighting in the foreground does help.  It sadly doesn't feel like it helps that much, since it doesn't actually reduce enemy numbers to kill them, which leaves it to the soldiers to win or lose.  It's more based on your unit's level and how they match up to the opponent. 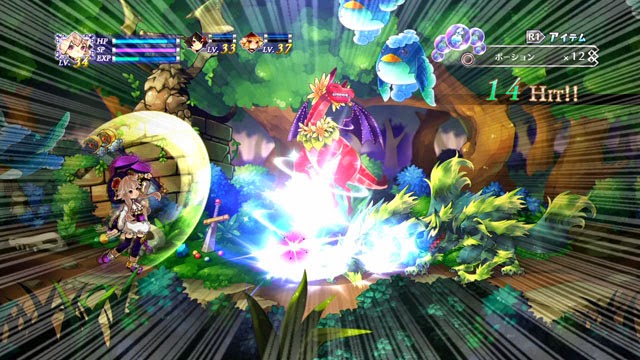 The sieges and skirmishes, while interesting, just don't seem fully realized.  The first time you get to them, they just seem too hard, forcing you to grind until you and your troops are strong enough to win.  Your soldiers die very easily, and in large numbers (especially in the sieges), and losing all of them is a lost battle.  Yuck.  While grinding is a necessity in some games, it seems too excessive in Battle Princess.  The first battle in the game is a normal fight, then the next is a siege.  I would think that the first one of a battle type is easier, so the player can get a chance to acclimate to it.  I was wrong.  The first siege (the second stage of the game) had me spend the next 30 or so minutes grinding to get strong enough to get past it.  That's not the best way to start a game off.  The first skirmish (the third stage of the game) wasn't quite as bad, but it was a close victory for me.

This "grind for the sieges and skirmishes" seems prevalent.  After those first ones, there were several normal stages that unlocked.  I didn't lose a single one of them, but the next siege (which was optional) was way harder than it should be, considering how early it unlocks.  The next skirmish I got to was ridiculously hard, and had a boss that basically turtles the whole time, making it harder to get the morale necessary to change your troops and win.  Each time a new siege or skirmish unlocked, it would result in an hour or so of grinding to be able to pass it.  It's entirely possible I'm just terrible at those types of fights.  However, raising your level and getting the money, both necessary to train up each type of soldier, didn't come naturally and required multiple plays of previous levels.  I'm ok with grinding, but it really should be later in the game.  Having it so early just left a bad taste in my mouth and made the game feel unbalanced.

That grinding seemed to make up the bulk of my playtime, since it felt like it took hours to actually get anywhere in the game.  Story-wise the game is fine, if a bit silly at certain points.  Each character has a distinct personality, and none of them seem to get along with each other.  The princess herself is a complete ditz, and her brother, the king, has turned into a goose.  It's pretty enjoyable, and that part of the game doesn't take itself too seriously.

The trophies are a fairly standard set.  You'll get a few for completing sieges, and some for number of kills.  You'll have to use all the different characters to get a platinum, since you'll need to max out all their levels and honor (affection, basically) with each other.  There's some for getting a lot of kills and high hitting combos to round out the list.  Some of these seem like they will take a lot of time, but affection and levels can raise faster than you might think.

While the battle system for Battle Princess of Arcadias is fun, the necessity of grinding was very off-putting.  The sieges and skirmishes were a good idea, but not executed as well as they could have been.  The animation is a bit stiff and looks like early web videos.  While this might all be intentional, the game was a bit disappointing to me.
Posted by The SAHD Gamer at 2:00:00 PM