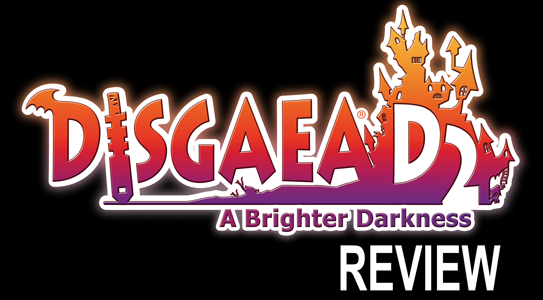 Although the smash-hit Disgaea: Hour of Darkness had three sequels (and a few re-releases), it has not spawned a direct sequel starring the same lovable cast of characters.  Until now.  Disgaea D2: A Brighter Darkness picks up five years after the close of the previous game, and stars Laharl, still trying to assert himself as overlord upon the population of the Netherworld.

Thankfully, they are still using sprites, and they look great.  The characters, environments and attacks look more detailed than Disgaea 3 (I haven't played 4 yet, since I want to wait for the Vita version), and the animations are wonderful.  I like most of the new techniques and the new looks of old ones.  They are flashier than they have been.  To me, the "mega" versions of the elemental magic take a bit too long (except mega star, that one is awesome), so I usually end up skipping them with the Triangle Button.  The music is once again pretty good.  There are some remixed classic Disgaea themes with a lot of new ones.

As previously mentioned, the game picks up five years after the close of Disgaea.  Flonne is still a fallen angel, and Laharl is still claiming the title of overlord against a throng of naysayers.  While the writing and voice acting are very good, I took exception to so many people in the game being clueless about Laharl.  I get that it's a running joke that just about everyone is mean to him, but he went to Celestia and beat up the Archangel!  How many demons have done that?  I would think someone that wasn't in the castle must have heard about that, as it would have been a big deal.  However, it seems no one has, so there are all sorts of demons vying for the title of Overlord, and it's up to Laharl to put them down.  I like the story, but it's not as good as the first Disgaea.

On a side note, Etna claims that she won't try to kill you, because if she tried, she would succeed.  She must have forgotten the beginning of the first game, since she did try and she failed.  Silly Etna.

Disgaea D2, like the ones that have come before, is a strategy RPG.  The battlefield is a grid that you move your units on.  They deploy from a "base panel", and only a maximum of 10 of your units can be on the field at a time.  Units can be placed back in the base panel and another can take its place.  However, if a character dies that slot cannot be regained until the next battle.  Thankfully, death is nowhere near permanent, as in the overlord's castle, there is a hospital where you pay to have your units healed.  In fact, you are rewarded based off the amount of healing you do and number of units you have resurrected.  So, don't be afraid to sacrifice a unit for the greater good.  It's what a good overlord would do.

The types of weapons that your "human" characters equip have different attributes.  Spears can hit farther out, fists have more counter-attacks, guns have range but can only shoot in a straight line, and so on.  Each character type has different affinities for each weapon, which means they level it up faster.  Leveling up a weapon will make their attacks more effective and sometimes grant you a special move.  While it is preferred to match a character with particular weapons, you are free to equip them with whatever you want.  Like most of the things in the game, it is very elaborate, more so than I can write here without talking your ear off.  Well... typing your ear off.

Anyway, most stages will also have effects that are granted when characters are standing on colored tiles.  These are called Geo Effects.  There are Geo Symbols that will grant their effect to all of whatever color tile they are on.  Some of the possible effects are: invincibility, level up (only for enemies), damage, warp, or extra rewards for defeating an enemy.  The symbols are able to be moved, so you can put them where they will benefit you instead of the enemies.  They can also be destroyed, and will change the color of the tiles to whatever color the destroyed symbol was.  While the color is changing, any unit standing on them will be damaged.  These can be chained together and if done correctly, the entire board can be cleared of geo tiles, which will damage all enemies left on the map.  The other benefit of changing the tiles is that you get a good chunk of bonus gauge for it.  The bonus gauge is extra stuff that you get at the end of a battle, like extra money, experience and equipment.  So, like HP, more is always better.

Like any good, long running series, there are improvements to Disgaea D2 versus the previous games (again note that I haven't played Disgaea 4 yet).  The Dark Assembly, which is like a congressional meeting to get various things unlocked, can now be paid off if you fail (unlike the real Congress, the senators of the Netherworld actually work).  There's even a similar one for the Item World, called the Item Assembly.  It allows you to change the look of a weapon, or increase the stat gain on it.  Evilities also return, and each class has three to choose from.  These can also be switched while visiting the Dark Assembly, and can even be stolen from other units.

However, my favorite new thing is the Cheat Shop.  As you progress, you unlock more options for it, and it really allows you to tailor the game to your tastes.  Even if your tastes are weird (no experience, I'm looking at you).  My favorite part, though, is changing the percent of the different rewards for beating enemies.  You can increase and decrease experience, weapon xp, mana, money and skill xp.  To add a percent, you have to take it from one of the others, so there is still balance.  Personally, I sack some of mana and money, since I didn't need as much of that early on, and put it into experience.  That way, I can cut down a bit on the grinding and make my way through the story.

If you enjoy SRPGs, then Disgaea is always chock full of content.  Besides the main story, there are special stages unlocked after completing that, new game+, a level cap of 9999 (really) and the item world.  Each item contains a 30-100 story random dungeon inside of it, which is the item world.  Completing floors and defeating Item Generals every 10 floors will power up the piece of equipment.  You could theoretically play the game forever.  Even if you didn't, there's a lot to do, and is well worth the asking price.  Or, to put it another way, the original Disgaea was always my first choice for a game I would take if I were stranded on a desert island and could only have 1 game and Disgaea D2 has at least that much content.

There's also a chunk of things I haven't even touched upon in the review yet.  Items have "innocents" that increase the stats of the weapon.  These characters can be killed in the Item World, and then can be freely moved to another piece of equipment.  Characters can have masters and apprentices, where the mentor will get a stat boost and the apprentice can learn the techniques of the master.  It's a nice easy way to give your mages multiple elemental spells or give characters a heal for an emergency.  There's also reincarnation, where you go back to level one, but gain bonus stats based on how many levels you had before reincarnating.  In the short run you may get weaker, but in the long run you grow a lot more powerful.  A great new addition is "Promotion", where you can change your created characters to the higher tier version of their job class without reincarnating them.  There's a lot at your disposal in the game, but you don't have to take advantage of it if you don't want to.

I will say that there are three downsides for me in the game.  The first is that the story levels will likely require you to grind a bit.  As the battles became tougher, I would take a run through the Item World to get some more experience before moving on.  The second was a few of the story maps.  The Geo Effects on some of them is pretty mean.  Yes, it adds to the strategy element, but sometimes it feels like the deck is really stacked against you.  The third is the random times the game locks up.  It only happened to me a few times, but sometimes when an enemy cast a fire spell, the game would freeze.  After doing some digging, it mostly seems to happen in the digital version.  Here's hoping it gets patched out.

I'm preferring the list of trophies in D2 more than Disgaea 3's set.  You get one per chapter, and one each for some of the super bosses in the game.  You also get some for doing things in the base, like talking to characters (a lot), and jumping.  There's a few just given away, for creating a character, using a mounted skill, and so on.  A good variety of trophies overall.  Some of the DLC for the game also has trophies, and they are already on the full list.  The DLC is basically characters from other NIS games, like the previous Disgaeas, Phantom Brave and La Pucelle Tactics.  I was sad to see the La Pucelle DLC has 2 different Priers, but no Alouette or Croix (my favorites).  Maybe next time?  Also, no Jennifer, Gordon or super robot Thursday?  I may be the only one, but I want Gordon back with his overlord given title of "Slayer of the Netherworld".

Sorry, I got a bit off track there.  If you at all like strategy RPGs, give Disgaea D2 a try.  If you liked any of the Disgaea games, play D2.  There's a lot of freedom in leveling up equipment, reincarnating characters and even different colors you can make your units.  It takes everything great about the first one and refines it while adding great new touches.  Even without the grinding, there is near endless playtime.
Posted by The SAHD Gamer at 10:43:00 PM