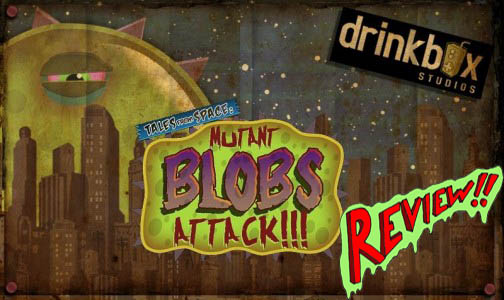 Tales from Space: Mutant Blobs Attack has players play the part of a mutant blob who escapes from a research facility and proceeds to cause mayhem to the world that experimented on him.  You will have to jump around, avoid dying and eat up lots of items to grow and exact your revenge.

The graphics look like flash animations.  The humans depicted look strange, but it's intentional and works with the nature of the game.  The blob itself looks awesome- it is very fluid and contorts to fit in different spaces, which makes it seem more realistic.  Well, realistic for a mutant blob.  The music is fine but forgettable.  However, the ending theme for the credits is funny.  It's a nice way to end the game.

At its heart, Tales from Space: Mutant Blobs Attack is a platformer.  You have to jump and navigate the stages and hazards from one end to the other in order to advance.  Thankfully, there are several things in the game to differentiate it from its competition.  The blob can 'eat' various things lying around, and eating enough will make him bigger and allow him to eat/absorb larger things.  So, there's a little Katamari thrown in to fit the theme.

Your blob also gets a magnetic ability so you can attract or repel yourself from metal surfaces.  This leads to some interesting platforming and puzzle solving, and was a great way to add something unique to the game.  There's several sections where you have to move various elements by using the touchscreen.  There are platforms you can move and bars you can rotate to launch items or the blob itself.  These can be fun, however, sometimes the touchscreen isn't as accurate as I'd like.  Trying to jump around while holding the system with one hand or having a giant finger in the way of your screen can be annoying and frustrating.

There are a total of 24 levels spread over 6 areas.  Each level lasts anywhere from about 5 to 20 minutes.  The levels are not too hard, even though there are several frustrating parts.  Checkpoints are fairly generous, which alleviates much of that annoyance.  In each area except the final one, there are motion levels where you have to tilt the Vita around to move the blob.  At first these were really annoying, so I skipped them (you can opt not to do these).  I later realized that I was tilting it incorrectly.  Hold the Vita flat out in front of you, as if it were a table, and tilt it each direction that way.  It made the levels pretty easy.

Tales from Space: Mutant Blob Attacks has 14 trophies, most of which are from story progression or doing a small task during a level.  Overall, most of them aren't very hard or take long to get.  The longest ones are getting all the friends in all the levels and getting the gold medal score on every level.  This will require you to play several levels over again, since getting the gold medal score can require almost all of the scoring opportunities in a given level.

The game is pretty short and could reasonably be completed in an afternoon.  It's a fun pick up and play game to spend some time with, but there isn't really any reason to replay it.  If you are after trophies or a higher spot on a leaderboard, you could get a little more playtime out of it.  It costs $7.99, so I was thankful I got it for free from Playstation Plus when it was offered.  Eight bucks for an afternoon or two of entertainment is cheaper than a movie, but I'd wait for a sale if you are interested in getting this fun little game.
Posted by The SAHD Gamer at 1:39:00 PM