The Huntsman: Winter's Curse is a side story to the recent movie, using the backstory and a few characters throughout its own original tale.  The PS4 release combines all five "books" that the game was originally split into as one full game.

The game is also really cool looking.  Each book opens with a voiced cutscene setting the stage.  However, that is the only voice work in the game.  This doesn't bother me, but there is a lot of dialogue, so I could see some people being turned off by the lack of voice acting.  It reminds me of my old school RPG roots, so I give it a pass. Dialogue and combat artwork is really good, and animates even better.  It looks like a story book, which is very appropriate.  Battle animations don't actually connect with your opponents.  Again, this reminds me of old RPGs I enjoy, so I'm fine with it, but I have heard people complain about that sort of thing before.

Combat is card-based.  Each piece of equipment provides 1 or 2 "cards" that have different effects on them, like attack damage or healing.  When combat starts, you get a number of cards that equals your hand (3-5, depending on skills).  On your turn you pick a card to use, and then that action takes place.  The card shows the amount of damage or healing, plus the effect of any buffs or debuffs you may have.  Many cards have multiple effects, with both being shown on the card.  For better or worse, you will draw multiple copies of the cards in your inventory.  I do like that you will never run out of cards, but it can be annoying when you draw multiple of a card that you don't want right now.

The turn order is represented by the character portraits on the bar at the top of the screen.  The portraits move toward the end, and when they reach it, that character takes a turn.  The action pauses when it is a character's turn, so you have plenty of time to look at your hand and decide what card to use.  Turn order isn't set in stone, since some card effects can stun (sliding your turn back) or invigorate (sliding you forward).  If you have ever played the Grandia games, it is a similar idea to turn order there, but not as complicated.

During the course of the five books, you will get many pieces of equipment.  Weapons and armor are unique to each character while accessories are shared.  Characters can equip two different accessories.  Unless you are in combat, you can switch your equipment at will, even during dialogue scenes!  When a character levels up, they gain a skill point to put into the skill trees.  These too can be freely redistributed, which is really cool and useful.

While there are some side quests to complete, the game is pretty linear.  You travel to different locations, but only if there is a quest there.  There is no real moving around the map, just selecting what quest you want to do.  There is some (or a lot) of dialogue, then usually a fight, some more talking, then you get your reward, rinse and repeat.  There are several dialogue choices in the dialogue scenes.  Some allow you to avoid extra fights, but they won't really change the story direction.  Most fights aren't that hard if you have some good equipment on, but a few are pretty tough (especially the final boss).  If you lose a fight, you get the option to retry it, or abandon the quest and go back to the world map.  Side quests give extra experience and equipment, so I recommend doing them right when they become available, as every little bit helps. 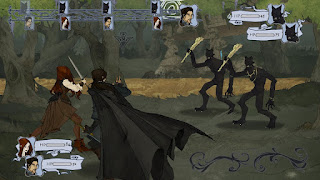 As stated before, there are five books for the whole game, and each book is about an hour of content.  There isn't much replay other than re-experiencing the story, since the game is so linear.  You could mess around with the different dialogue options, but most of the differences there would be a few fights.  You also only get one save slot you can save to (there are a few auto saves, but they are no more than a minute apart, as I suspect they are backups), so if you do want to go through the game again, you would overwrite your previous file.  I should also mention there is no option to re-size the HUD, so there were edges of the game were off my screen.

Now we move to the more unfortunate part of the review: the bugs and glitches.  Sadly, this game has a few, and they can be game breaking, just not the way bugs usually are.  I'll start with my big one: I hit a point in the second book where I had a fight I could not win.  It was Elisabeth versus three spiders.  No matter what equipment I had, there was no way for me to win the fight.  Even putting it on easy didn't work, since that just barely reduces the enemy's max health.

Why was the fight unwinnable?  Because I was supposed to have a second character.  Previously in the story, the character left, but they came back.  However, the game just skipped the end of that scene, so I didn't get the message that the character rejoined my party.  So the character wasn't added to my party.

Reloading didn't work, since the game had saved after that.  You only really have the one save file, so I couldn't even go back to a previous save.  It looked like I would have to start the whole game over.  Yes, that would only mean losing 2 hours of play time, but I still shouldn't have to do it.  Thankfully, the new save file had not yet been uploaded to the cloud, so I could retrieve an earlier one, only losing about an hour of playtime.

There is no way to actually skip cutscenes, so I'm not sure why the game does that sometimes.  It can happen at any story scene.  Just in the middle of dialogue, it just skips past the end and brings you to the world map.  Trouble is, 1) you miss story or even dialogue choices, and 2) you won't get any rewards that you were supposed to get, including experience, items and party members.  That's really, really, really bad.

I did find a bit of a workaround if you encounter this.  If the game skips the story and kicks you back to the world map, quit to the main menu.  Then, close the application on the home screen (you could reload from the menu, but it won't actually do it, just load and show the main menu screen without any options, which is another bug).  Boot up the game again and select 'continue'.  This will put you around where the game skipped from, and you can view the rest of the scene and get your rewards.

The Huntsman: Winter's Curse is a pretty fun game.  The story is decent, the artwork is great, and combat is pretty fun.  While it's not a very long game, it's the bugs that ruin the experience.  It would be worth playing for old school RPG fans if those ever get fixed.


The Good:
The artwork in the game is great.

The Bad:
The bugs that can completely destroy your ability to progress.

The SaHD:
Why are there three party member slots when you only ever get two at a time?!

(Review code for The Huntsman: Winter's Curse was provided by the publisher)
Posted by The SAHD Gamer at 10:41:00 PM