Caladrius Blaze (English website link) recently released on PS4.  After seeing it was a shmup (shoot-em-up), one of my favorite genres, I had to try and review the game.  The game is a vertical shmup, meaning the screen scrolls up and down.  Yes, this works better in arcades, since screen dimensions are different, but plays just fine on a normal TV.  Here, the side bars are used with the "shame break" system discussed below.  You move your ship around and shoot at enemies while making your way through the game.  There are also limited-use screen clearing bombs to get you out of tight spots, or to add extra damage to bosses.  The biggest unique element of this game, though, is the elemental shot system.

Each of the 8 different ships gets three different alternate abilities, designated by type: attack, support and defense.  Attack element shots are either strong shots or spread shots (usually the opposite of what the character's default shot is).  Support shots tend to hit set areas of the screen or do something else unique.  Also, some of them can be changed by ship position or how you are moving when you use it.  Defense shots are probably my favorite, since they shield your ship from enemy shots.  There are separate meters for each at the bottom of the screen, and using one will drain the meter a bit.  The meter fills over time, based on the character's stats, or by picking up a crystal item during the stages.

Each character has a different element, which is reflected in their elemental shots.  I don't know if enemies are particularly vulnerable to any specific elements, but it does help differentiate them from each other.  Killing enemies with the special shots will eventually drop an elemental chip.  Collecting enough chips will reward you with an upgrade point between stages.  You are free to choose which elemental shots you upgrade, which is pretty cool.  Every few levels, the look of the shot will change to reflect its more powerful state.

The main mode is story mode, which has three different options in it: Original, Evolution and Arcade.  The only real differences between them is the number of stages, as one only has 5, where another has 6 plus the two extra stages, and the third is in-between.  Plus, the special attack (pressing all three elemental shots at the same time when your gauges are over 50%) slightly differs in each mode, too.  The main stages are straightforward, fight through the enemies and then beat the boss after some dialogue (yes, there is actual plot!)  One of the extra stages tasks you with trying not to let enemies leave the bottom of the screen, and the other requires you to destroy certain enemies before they leave the top.  Stage bosses each have three phases, where they change up their attacks. 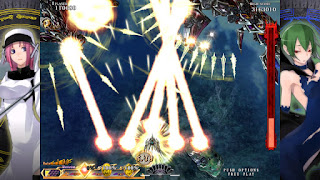 If you perform well enough, or end each phase with an elemental shot/bomb (I'm not sure which, as it seemed either worked), you will destroy some of a boss pilot's clothing.  These are called "shame breaks", and award extra points plus an image of the character.  Whenever your character loses a life, some of their clothes are also ripped.  The portrait of each pilot in their current state is shown on the border of the screen, which can actually be used to approximate how many lives you have left without looking in the upper corner.  The whole system seems like some fan service throw in to the game.  I don't mind it, but it does feel a bit unnecessary.  Although, it is funny to see Lilith not care at all that her clothing is getting evaporated (as the embodiment of hatred, she is kind of weird).

Each run through story mode takes about 30 minutes per character, depending on which story mode type you choose.  I found Caladrius Blaze to be harder than other shmups I've played, and I only had it on the normal setting.  It's possible I am really bad at it, or just off my game, but I died a lot.  It was a little embarrassing.  I'm not sure that all shot patterns can be evaded, or maybe shots traveled quicker than I am used to in these types of games.  Slower ships where much more difficult to use, but I suspect all of this is because of how good the defense elemental shot is.  Thankfully you get infinite continues in the story mode, and each death gives you another bomb.  This is good since bombs are per continue, not per life.  Even so, I was able to persevere through each story mode type.  2 player co-op is also present in the game, in case you have a friend that wants to help out.

Besides story mode, there is an unlockable Boss Rush mode, which does not give continues.  There is also a score attack mode, which is a great way to practice a particular stage, try out a new configuration, or try for a trophy.  Most trophies aren't hard, but a few are for experts only.  Pictures seen during the game are also added to the gallery.  I'm not sure it always works, however, since there are some pictures I should have, but aren't unlocked.  The best unlockable in the game is the customize option.  Beating the game with a character allows you to swap out any of their elemental shots with any other elemental shot from another character you have completed the story with.  Theses aren't restricted by type, so go wild and create your best character!

While Caladrius Blaze feels harder than other shmups I've played in recent times, it is still a genre I enjoy and I had lots of fun playing the game.  8 different ships with different shot patterns and elemental shots, plus three different story modes and some nice unlockables make this a definite play for shmup fans!


The Good:
Elemental shots are a great unique addition to the shmup formula.

The Bad:
Either the game is harder than the typical shmup I play, or I'm not good at the game.

The SaHD:
Before playing around with remapping the controls, I had a claw hand for using the support shot quickly.


(Review code for Caladrius Blaze was provided by the publisher, H2 Interactive Co, Ltd.)
Posted by The SAHD Gamer at 2:28:00 PM