I decided to take a look at Deadlight, one of the many games that has been given away during the Games with Gold promotion on Xbox.  Deadlight is a 2-D side-scrolling action platformer set against a zombie apocalypse.  Hey, it's also set in Seattle!  Neat!

Well, ostensibly the game is set there.  It really doesn't look super accurate, or much different from other big cities, but it gets the point across.  Even so, I really like the presentation of the game.  It is somewhat stylized in the actual game, and the story scenes are like motion comics.  Pretty much all of the lines are voices, and the voice acting is solid.  I actually didn't expect that.

The platforming in the game is workable, but not as responsive as it needs to be.  There is a run command that is necessary for many of the jumps.  However, it takes a second after you run while holding it for the running to actually kick in.  This might be fine, but there are many times where you have to do this on a small platform with just barely enough space to pull it off.  The character's jump isn't always as high as it seems, making some jumps much more of a pain than they should be.  Couple that with the fact that he won't always grab ledges that he is supposed to, and you have a recipe for annoyance.

You also get a wall jump.  It would be useful, but I just can't get it to respond half the time.  I do it exactly as instructed, but sometimes it just won't respond, and you just fall down and have to start again.  Another thing that bothers me is how well foreground and background objects can blend together.  There were a few times that I was sure something was a ledge, only to have it not be, sending my character plummeting to their death.  There were other times I though something was part of the background, only to have it actually be something I could stand on to proceed.

So is the combat any better?  Not really.  Melee combat (with a fire axe!) starts off passable, but is much worse when you are allowed to do it again further in the game.  Enemies just take too many hits to die, and when multiple are sent at you, it is that much worse.  Sometimes you won't even hit them if they are too close.  Each swing of the axe takes some of your stamina, so you have to be careful.  You can't do many swings before having to rest, so fighting more than 2 zombies at a time is, like many things in this game, more annoying than it should be.  If a zombie grabs you, you can mash a button to get out, but others can take cheap shots at you while you are escaping, so you can lose the health regardless. 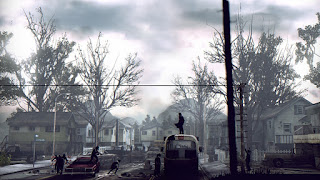 Shooting in the game is much better than melee combat.  Ammo is fairly limited, but you can use the guns to quickly clear out zombies in your path.  I tried to only use the gun on enemies in my way, and I had enough shots when I needed them.  Just aim for as many headshots as you can, and you should do fine.

As for difficulty, the game just loves to kill you in cheap ways.  It didn't really happen at all to me in the first half hour or so, but then the game kicked it in to high gear.  Plenty of spike traps, pits and other instant kill nonsense made me wonder why they even bothered with a health bar.  Many times I would die while trying to figure out where to go (either the aforementioned foreground/background problem or getting swarmed by zombies).  The developers also threw in some running sections where you have to stay ahead of some catastrophe or another, otherwise you die.  While solid in concept, the flawed platforming just turned these into rage sections.  Now that I think about it, even though the concept is solid, I'd like it if all games stopped trying to do these sections...they just aren't fun.

Overall, the game would take about 3 hours to beat.  However, the frequent deaths and then reloading the game extends that time frame considerably.  There are collectibles to find if you want, but most of them are easy to find, or right in your path.  Other than than, there are three Tiger-like handheld games you can find and unlock.  It's a neat throwback to people old enough to remember them, but they only offer a few minutes of distraction.

Deadlight was a game that I didn't know much about before I played it.  That was for the best, since even then, the game was pretty disappointing.  The visual style of the game is the best part, but the inconsistent platforming, ineffective melee combat and cheap deaths drag the game down into the sewers.  Maybe they can dodge The Rat's traps while they are there.  It starts off fine, but quickly gets worse, which is not good, even for a short game such as this.


The Good:
The visuals and comic book-like story panels are great.

The Bad:
Sadly, the core of the game (platforming and combat) just aren't very good.

The SaHD:
I feel like the Remastered edition on the current gen systems won't actually fix any of the issues with the game.  If it doesn't, there was no reason to "remaster" it.


(Deadlight was obtained with the Games with Gold promotion)
Posted by The SAHD Gamer at 11:01:00 PM